It's Not Thomas Jefferson Sitting On a Boot Taking a Crap, But It IS a Conversation Piece

Perhaps you remember one of Hick's auction treasures, a small figurine that I thought resembled Thomas Jefferson sitting on a boot taking a crap. I'm not sure where Old Tom is now. Perhaps he's next in line for his own themed shed. I hope he's prepared to wait. Now Hick has an even more interesting conversation piece: 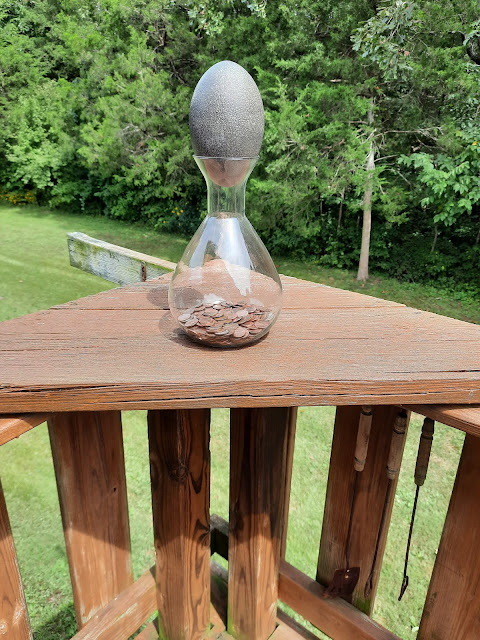 No, it's not a primitive rocket. It's not a lamp. It's not a smooth stone, such as basalt (for you rockhounds or former Earth Science teachers). 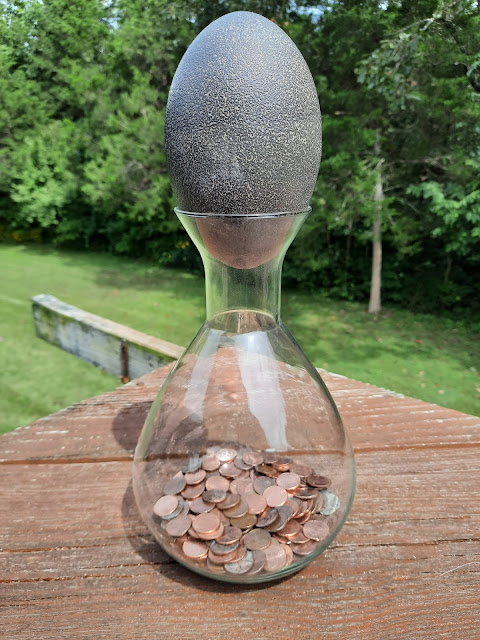 We're not talking about Hick's new container for HIS collection of pennies, which are just the common kind like you get back in change. Not the exotic kind like I hunt and capture every week for my Future Pennyillionaire Fortune. Nope. What we're talking about is... 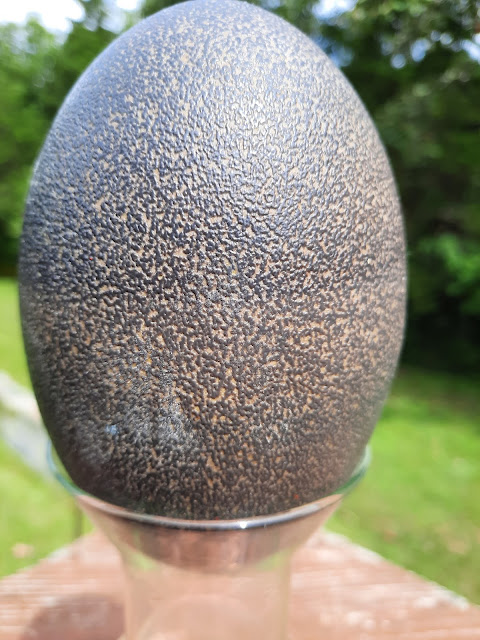 THE EGG! That's an EMU egg, courtesy of Blog Buddy Kathy, who has been saving it for Hick for quite a while. An emu egg is a terrible thing to waste. Kathy didn't want to unceremoniously toss it out when cleaning her HeWho's collectibles out of their outbuildings. She probably didn't even want to ceremoniously toss it out, either!
Hick gladly accepts other collectors' no-longer-wanted collectibles. I'd mentioned it to him a while back, but he never made a trip to Kathy's to collect it. So she selflessly took it upon herself to send it to Hick. It arrived last week.
"Here. You got a package today. Even though it's addressed to ME, I know it's for YOU. Be careful unwrapping it. It's FRA-JEE-LAY!" (Blog Buddy joeh and I watch the same movies.)
The Pony was sitting on the couch watching as Hick opened up the box. I had tipped off The Pony about the contents.
"Do you like it?"
"Yeah! What is it? Some kind of egg?"
"It's an EMU EGG! Do you know who it's from?"
"From you, I guess. There's a note in it. With your name on it."
"It's not from me! A note? The note is FOR me. Why would I start out a note by addressing it to myself? I'm not the only person with that name, you know! It's from the lady with the campground that I tell you about. Remember, you never went to get your emu egg. So she sent it."
"Oh, yeah. It's LIGHT. There's something in it. I can hear it when I shake it."
"Probably it's dried out by now. That might be the yolk that's left."
"Or a tiny skeleton, depending on when the egg was taken from the emu." The Pony is sometimes a bit morbid, though a realist.
"You need to get a stand to display it on."
"I have one! There's one in The Pony's room--"
"That has MY egg on it! The one Mom's grandma gave me. The rock one."
"You can't just go taking someone else's egg stand!"
"I'll find one. For now I'll set it on top of my pennies. That will hold it."
I am NOT mentioning anything about that emu egg deserving its own themed shed...
Thank you, Kathy, from me AND Hick. He loves his new emu egg!
Posted by Val at 1:05 PM