Toot, toot, hey... beep, beep
Bad cars,
Talkin' 'bout the sad cars
Sad cars
Talkin' 'bout the bad cars
You see them out on the street all day, broken
Balkin' at all kinds of terrain
If you play it right, you can drive
Because seniority's might
Danged if he does, danged if he don't. The Pony is having an issue with his government-issued vehicles since his return to work after his broken-ankle sojourn.
He's been mistakenly given an LLV (Long Life Vehicle, the standard mail JEEP thingy) that was earmarked for someone else, and had to bring it back and clock out early, because there was nothing for him to drive.
The next day, he had to drive one of the new little vans out to find the LLV that was earmarked for HIM, and reload all his deliverables in it after switching out the van to the new hire on her very first solo route.
Yesterday, The Pony's LLV broke down, and he had to sit for an hour waiting for another LLV to become available for his rescue. It took him until 8:30 p.m. to finish his route.
You might surmise that The Pony is being pranked, or punished in some way with the vehicle assignments. You would be wrong.
"I knew this one had problems. I think it was the starter this time. All it did was CLICK when I turned the key. We were shorthanded anyway, which is why they called in at 8:30 when I was scheduled for 3:30. So I knew it would be a long time to get rescued, and nobody would be helping me, because we didn't have enough people. I've gone to help people 3 times since I've been back, when they broke down in this LLV."
According to The Pony, the regulars have a vehicle that's pretty much assigned to them. The CCAs (City Carrier Assistants) get what's left, depending on the route and the time they're scheduled to work. Thus his planned late start on Monday, when an LLV would be available after another route was done.
Don't think The Pony had a Cadillac when he got a functioning LLV on the good days. There was THIS one: 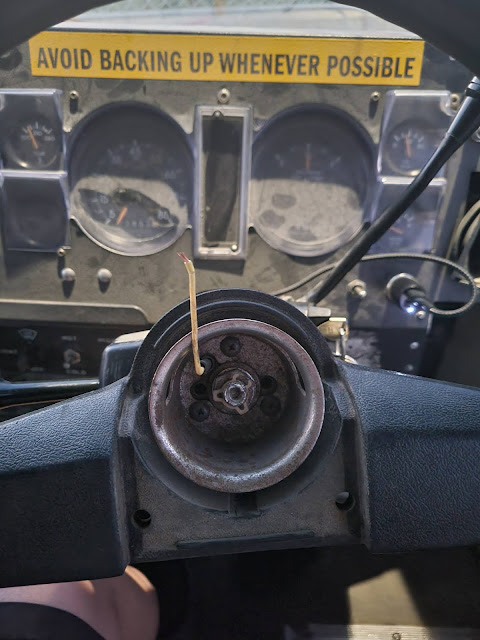 That's the horn. Or where the horn SHOULD BE.
"My horn got stuck. It kept honking, even though I wasn't touching it. I tried to get it to not honk by pushing on it and letting up, to make it unjam, but it wouldn't. Then when I turned a curve, the whole thing popped off! You'd think that would make it quit honking, but it didn't. At random times, it honked. But if I needed to honk, it wouldn't."
I guess something like that is minor. Even though you'd think it was a safety hazard. At least it wasn't like the LLV that lost its brakes one time. Thankfully for The Pony, he was not the one driving it. As you can tell from the picture, these LLVs are lacking a modicum of tender loving care. I daresay they've never even experienced indifferent tolerant care.
Anyhoo... The Pony said his replacement LLV after his breakdown Monday worked okay. Except for the headlights flickering when put on bright. Which he kind of needed, being out after dark.
Posted by Val at 1:03 PM