Even Steven Is At It Again

Yesterday, I mentioned how Hick discovered a giant problem over at Pony House on Friday afternoon. That being a fallen tree limb that knocked the electric wire loose from the house. Hick has no problem fixing the electricity. It's what he did for a living. It's just the issue of getting that giant tree trimmed before it does any more damage. As you might imagine, that limb kind of took the wind out of Hick's sail.
But wait! Don't you worry about Hick! He has made a miraculous recovery!
Saturday afternoon, on his way home from his storage unit store, he called me. You know, because he couldn't wait for the 10 minutes it takes to drive from there to home. I could tell he had good news. His voice was as excited as a kid on Christmas morning.
"Guess what I just saw!"
"Um. I don't know... a deer?"
"No! MY TRAILER RAMP! It's chained to a telephone pole!"
As you see, this story is in need of a few more details. A couple months ago, before closing on Pony House, Hick was working on his Schoolhouse Shed. He wanted to get it under roof before the weather got bad, so he SPENT HIS OWN MONEY on metal roofing. The place to get this metal roofing is out in the sticks. Even stick-ier than our enclave here in Outer Backroads. It's about 40 miles away, on twisty two-lane blacktop.
Hick hitched up his trailer to haul the metal roofing. Here's a picture of the trailer, with our new loaner-dog, who did not go on the roofing run with Hick. 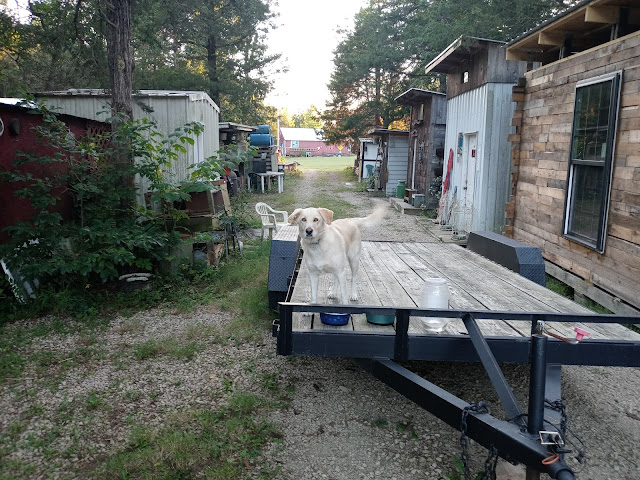 Anyhoo... after putting the metal roofing on the Schoohouse Shed the next day, with the help of HOS (Hick's Oldest Son), who did the climbing... Hick noticed that one of his trailer ramps was missing. It's a metal ramp that looks like a little ladder, for using to drive a car or lawnmower up on the trailer for hauling. Hick only had one. He was just sick about it. Somebody had given him these ramps not very long ago. They were better than the ramps he had before.
"You know it probably fell off out here somewhere. Where the road is bouncy. Not on the smooth road."
"Yeah. Maybe. I think I'll go drive around and look."
Hick even drove into town, looking along the roads. And maybe partway out of town, retracing his route. But he did not drive the whole 40 miles. He put something on his Facebook page about losing his ramp, hoping somebody might find it.
THEY DID! But they didn't contact him on Facebook. They chained it to a telephone pole!
Hick doesn't know how long it has been there. As he said, you'd think one of us would have noticed it, on all our trips to town. Even though I told him I'm usually looking at the cars over the center line when I'm going around that curve, not looking to see what's chained to a telephone pole. But sure enough, when I went to town later on Saturday, there was Hick's ramp. I got a couple of bad pictures on the way home, but you can't see the ramp. Forgive me. I was driving (on my own side of the road!) at the time. 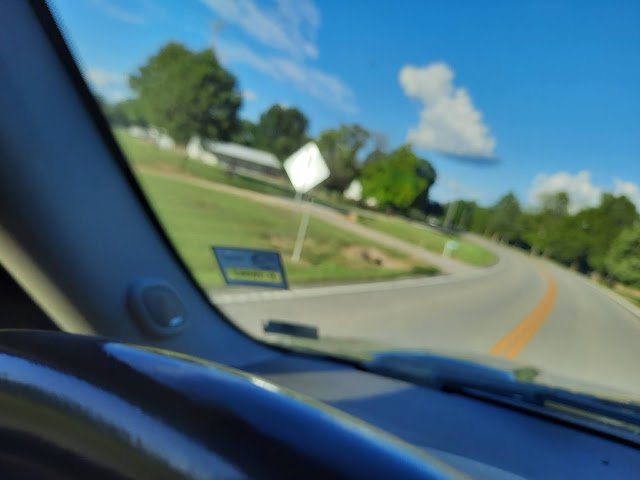 It was at the first house past the prison. That side road goes to one of the buildings where they have orientation for new prison workers. The house is on the left, in those trees. 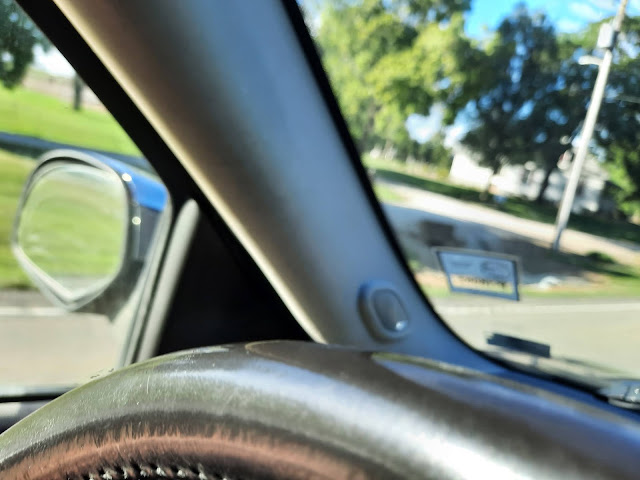 Hick's ramp was chained to the bottom of that pole, but you can't see it, due to my bad camera skills at 50 mph. Hick had stopped to look at it, and a neighbor from across the road came over. He said the guy was down in Bill-Paying Town, but he'd give the phone number. Hick had already put a note on the guy's door, with his own phone number. The neighbor said Pole Guy found the ramp, and figured somebody would be looking for it. So he put it where it might be noticed.
I haven't asked yet if Hick picked up his ramp.
Posted by Val at 1:07 PM