I Was Almost Looking For the Hidden Cameras

I go to Country Mart every two or three days. Sometimes just for scratchers out of their two lottery machines, but usually to pick up several items that I've decided I urgently need.
Monday, I went in for bandaids (my big toe is irritated by my shoe since our casino trip), Solo cups (Hick has been drinking unsweet tea as much as his Diet Mountain Dew), croissants (for making a chicken sandwich), red grapes (they go well with a chicken sandwich on a croissant), Frank's Original Hot Sauce (to put in my own Hardee's-like chicken bowl), and vegetable oil (we are going to be roasting The Pony's nuts, heh, heh! Like Chex Mix, for him to take to work as a snack). Oh, and I also threw in a box of M&Ms for The Pony, and a box of tall kitchen trash bags.
Anyhoo... here's the layout of Country Mart. As you go through the two sets of double doors, the lottery (heh, heh, I typed LOOTERY) machines are on each side, backs to the parking lot. In front of you are four check-out counters towards the left, and a corral of carts directly ahead. Past those carts is the vast produce/deli area. The deli counter is on the right, and L-shaped. Cold foods run down the tall leg of the L, then racks of breads like croissants and pretzel rolls and french bread and Hawaiian rolls. Then the glass cupcake case.
There are tables of baked goods in a row running toward the back aisle. Cakes, big cookies, pies, sliced cake/breads like banana nut bread. To the left of those tables are bins for produce. The seasonal fruit in front, then bananas, then potatoes/tomatoes, then onions. And on the left side of this whole area is the cool case with fresh produce that gets the misty shower every so often. That's where my grapes would be.
You go to the right, around the carts, past the coin-pusher machine and the stuffed-animal grabber machine to get into this whole deli/produce area. I kept going right, in front of the bottom leg of the L-shaped deli counter. It's the hot food side, which I had no interest in. I was on my way to the pharmacy area for the bandaids, and then the solo cups towards the back. I noticed, upon entry, that across the cart corral were two bright orange cones, and a sign that said CAUTION, Wet Floor. I made mental note to be careful there.
With my first two items in the cart, plus those Pony M&Ms and trash bags, I moved across the back aisle, and turned up into the deli area to get my croissants. They are baked in-store, and come 4 in a plastic box.
WHAT IN THE NOT-HEAVEN?
They were gone! Not just my croissants, but the entire contents of that deli area that are usually between the glass cupcake case, and the cold deli food like pinwheels and salads and sandwiches and cold (leftover) fried chicken. Racks and racks of breads! That floor area with the two cones was BARE! I could have walked unobstructed to my left, and into the swinging door to the kitchen! But I didn't. I was in shock! WHERE WERE THE BAKERY GOODS?
Oh, no! Was Country Mart going to close? Had they changed ownership again? Last summer when that happened, their lottery machines went unfilled. As tickets would run out, they were not replaced. That was happening NOW, too! For over a week, my $3 crossword scratchers had been out. And then several other tickets. Was this another sign? No bakery?
I might have done a complete 360, like Mary Richards in the opening credits of The Mary Tyler Moore Show. Only I didn't throw a hat into the air. I tried to calm myself, and headed over to my grapes. They looked plump and tasty, anyway.
I got my other items, and got in line. As the middle-aged lady rang up my purchases, she asked how I was doing.
"Well, I haven't been here in three days, and now I find out THE WHOLE BAKERY DEPARTMENT IS GONE!"
"What? Gone? No it isn't."
"There's no bread! All the racks are gone. I was wanting some croissants, and there aren't any croissants! Nothing! Not even Hawaiian Rolls! What's going on?"
"I don't know that there's anything going on."
Checker Lady turned to look. As if I was making all this up. Then she started talking to a little man about three people back in line.
"Let's ask Shorty. Is there something going on over in the bakery? Is stuff missing?"
Shorty had a speech impediment, and I couldn't make out what he was saying. Apparently he's a sometimes worker there, or a regular who buys a lot of bakery goods. He turned to look at the bakery area, and spoke excitedly, and gestured. Checker Lady translated.
"I know they've been working on the floor. Shorty thinks they just moved the stuff so they could get to the floor. All that bread is probably sitting in the kitchen."
Sure it is... I can't believe nobody else noticed anything amiss! It made me wonder if Stephen King is in Backroads, about to knock on my door, and ask to stay in one of Hick's themed sheds while he writes another story about The Langoliers.
This WAS on the day of that night's full Harvest Moon... 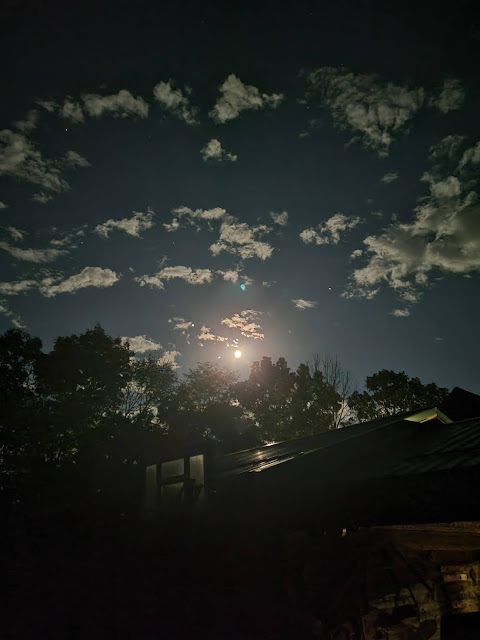 The Pony took this Friday night, before the moon was full, as it was rising over the garage and basketball goal, when he got home around 8:30.
Posted by Val at 1:01 PM