The Grillmaster Lives Up to His Reputation

Hick proved himself to be a renowned grillmaster on the 4th. Also a renowned eater, even though he didn't consume 63 Nathan's Hot Dogs.
No hot dogs on our grill, GassyG Jr. We DID have some bratwursts, but they weren't the kind I'd planned on buying at Save A Lot. Their meat department makes their own, and they are long and plump and delicious. Silly me. I didn't want to brave the crowd on Saturday, and by Sunday, all the good brats were gone. So I had to get Johnsonville. Which are good enough, but not as great as those generic kind on the white styrofoam tray.
I found a couple of T-bone steaks for Hick and The Pony: 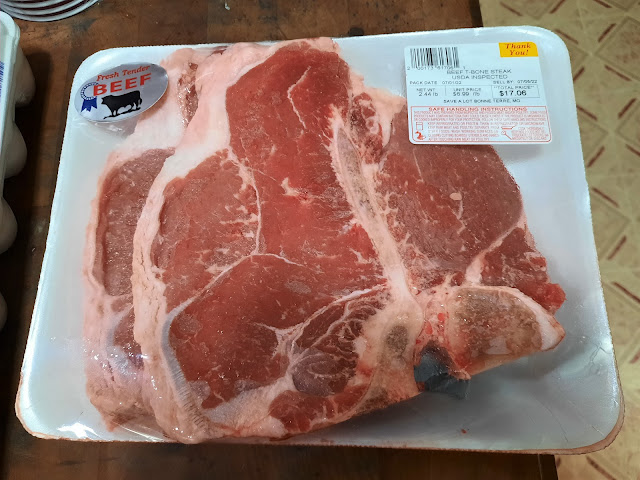 I don't skimp on steaks. They love them so much! This was not a bargain, but they were thick and meaty and fresh. It's not like we eat steak every day.
The Pony discovered that he needed one plate JUST FOR HIS STEAK! And another for his sides. And a bowl for the Stove Top Stuffing that he is partial to. 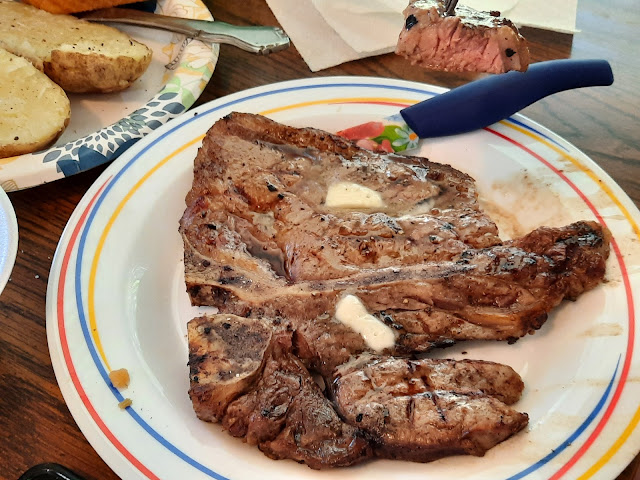 The Pony adds butter to his steak. Plus salt and pepper out of the grinders. That bite of steak up top is not levitating, but being posed by The Pony to show you the done-ness. He is not one to complain, and said his steak was delicious, but he generally orders his meat a little less done than this "medium" cooked up by Hick. Oh, and though we have actual steak knives, The Pony chose my little Pioneer Woman ceramic knife. 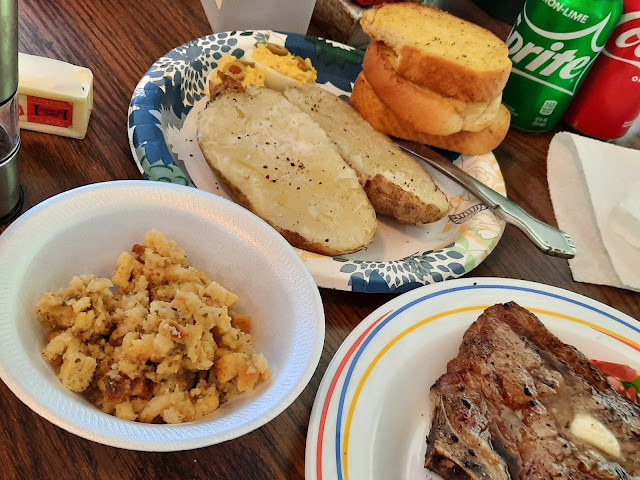 The Pony had his stuffing, a baked potato, two deviled eggs, and three slices of garlic toast. The frozen kind. No need to reinvent the wheel. It's not like I'm cooking a Thanksgiving dinner! Also, you might notice that The Pony was a two-fisted drinker, having both a Sprite and a Coke. I asked if he wanted to leave one in Frig 2 to stay cold, but he said, "It won't take that long!" He was right. That's my butter in the background. The Pony didn't bring his own Kerrygold this time. He's out, and the store was out when he went to get more.
Hick also had a plate just for his steak, after hearing The Pony's advice: 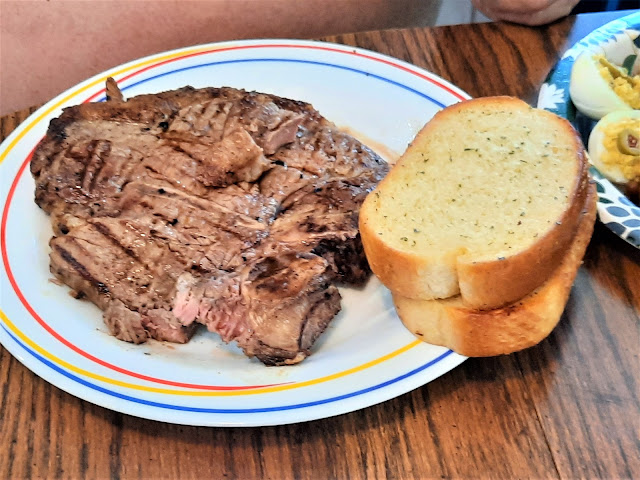 I didn't mean to show Hick's bare belly. No, we did not dress formally. We were having a cookout, not tea and crumpets with Her Majesty Queen Elizabeth. 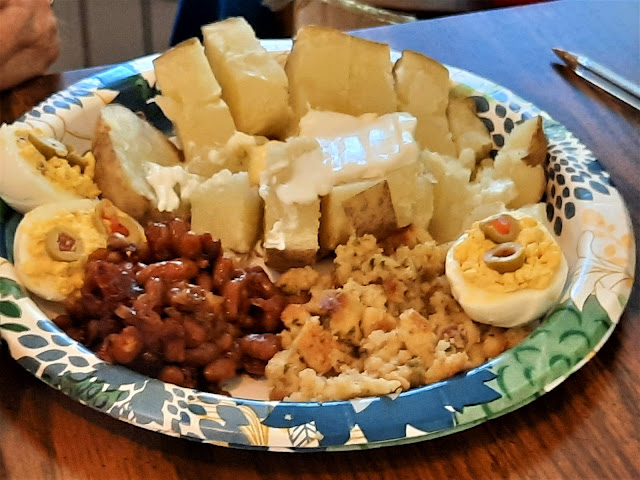 Hick's sides included three deviled eggs, stuffing, the before-seen two pieces of garlic toast, a baked potato that he dismembered, and the baked beans that we like actually BAKED, and sort of dry. I added a diced onion, and some BBQ sauce, yellow mustard, and a dash of Cuban mustard, then baked them at 350, uncovered, for 90 minutes. Stirring once. Oh, and before all that, I poured out the liquid from the can, because Hick despises runny beans.
I had two bratwursts, thought one would have been sufficient, I found out after eating them! 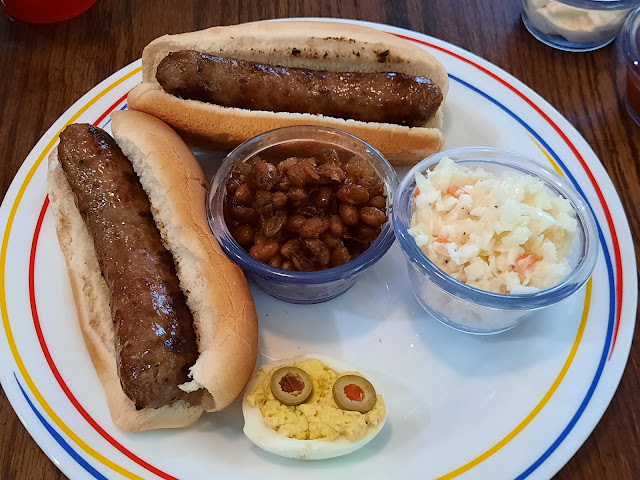 Of course I had a side of slaw! Store-bought. I don't like chasing my sides all willy-nilly across the plate, so I put mine in ramekins. Good thing, because while taking the picture, it dawned on me that I forgot MY potato, which I'd sliced and tossed in vegetable oil and baked for some tasty fries! The Pony took my plate to the stove to add them. 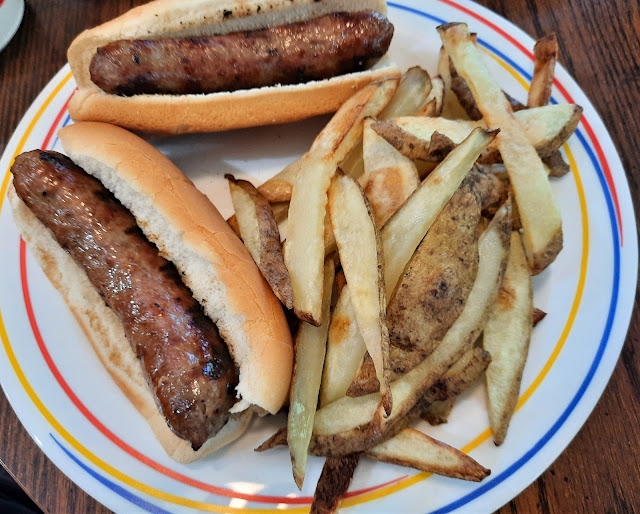 My potato was actually smaller that those of Hick and The Pony, but it sure made a bunch of fries, all tangly on my plate. 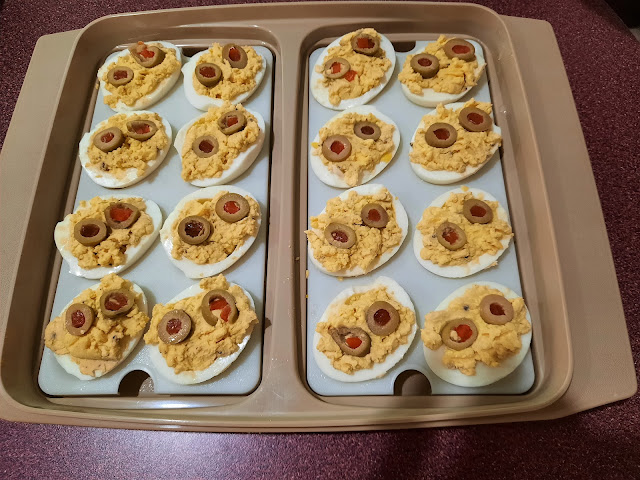 There are the deviled eggs, before we descended upon them like a horde of locusts! I also had a Chinese Tupperware container with eight more, for The Pony to take home. 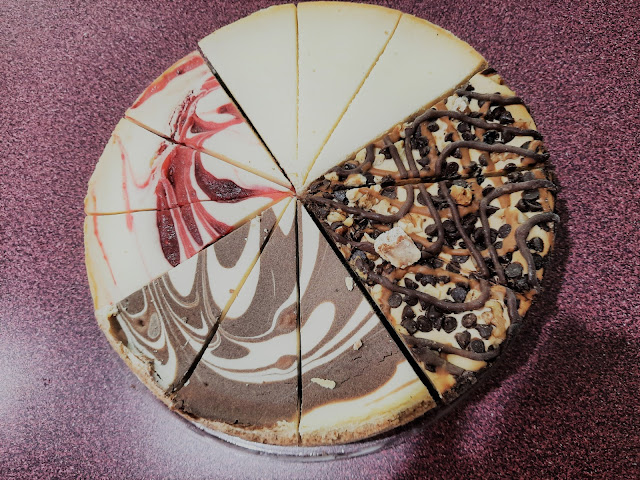 Hick and The Pony even had room for cheesecake! Not this ol' Val! I was stuffed to the gills. My favorite is the plain, with the graham cracker crust. Hick likes the raspberry swirl. The Pony prefers the chocolate swirl. He doesn't like that "Turtle" kind with the chocolate chips and caramel. The texture bothers him. I don't like the cookie-crumb crust on it.
The Pony had a portion of his steak to take home, and he gave me a few bits he trimmed off. The Pony is like Jack Sprat! I gladly accepted his fat with a little meat attached. The Pony is so generous! He also gave me his potato skins, and a round corner of garlic toast. Hick added a couple of chunks of his potato. So I had a plate of leftovers to look forward to.
As The Pony was leaving, he had FOUR Chinese Tupperware containers! His steak and three bratwursts. Two hot dog buns. Four slices of cheesecake. And eight deviled eggs. Plus two Little Debbie Cosmic Brownies that he liberated from our pantry. Oh, he asked first, before taking anything. He's a well-mannered Pony.
If the saying is true that "you eat with your eyes," I guess all of you are feeling pretty stuffed right now!
Posted by Val at 8:00 AM