The Pony is expecting a not-too-busy week at work. Several of the routes have recently been re-done.
"I give it a 50-50 chance I might get a two-hour day or just be off Monday, so long as nobody calls out. Apparently they can't send help for ten days on any route that's been changed, and that covers all of Backroads, half of Sis-Town, School-Turn Town, and half of Bill-Paying Town. Which wouldn't leave enough for big days for all of us on the schedule, even for a Monday."
"So you're getting closer to being a regular, I assume, if they're studying these new routes?"
"It should be. Pretty sure there's not going to be a definitive thing for the guy ahead of me until they certify the new route as full-time, and then they've gotta set up the T6. But it should be soon!"
"Enjoy the day off if you get it. Winter is coming!"
Then on Monday, Pony almost got his day-off wish.
"Woo. Gonna be a shortish one at least. Three-ish hours, maybe a bit more since I've gotta wait for the truck I'll get to come back."
"Getting paid to wait."
"Sadly not. I didn't clock in since there was nothing to do until my truck got here. There's a cat here:" 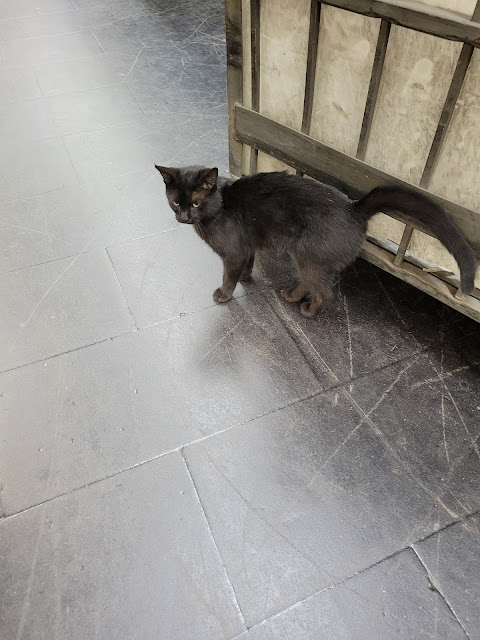 "Can't explain the cat."
"He's a stray that's been around here since last June."
"If you feed him, he will stay. Like a company mascot."
"He's been staying, yeah. I think one of the RCAs (Rural Carrier Assistant) is gonna take it home soon."
Heh, heh. I guess that cat likes the sound of cheeping chicks, and the smell of pickle juice.
The Pony only lives two minutes from work. He trots up there whenever they call him if somebody can't make it, as long as he has nothing planned for his day off. He's second in line to make regular.
This newly created route will also require a T6 route to be added. Which as I remember, is like a regular who fills in on the scheduled days off of other regular workers. The Pony says people want that job, because I think it means the days off are weekends. So there will be bidding, and the regular route of the person who gets it will open up. I don't know how much shuffling will go on, since everything is based on seniority.
Anyhoo... two regular positions will "soon" be available. One should go to The Pony.
Posted by Val at 8:00 AM