Won't You ReMake Me In Shackytown

Hick has been working on his Railroad Car Shack over in Shackytown. Seems he originally put the porch boards too close together. He thought a quarter-inch would be wide enough cracks to let water flow through. He didn't count on the fallen twigs and leaves from the trees that line Shackytown Boulevard. 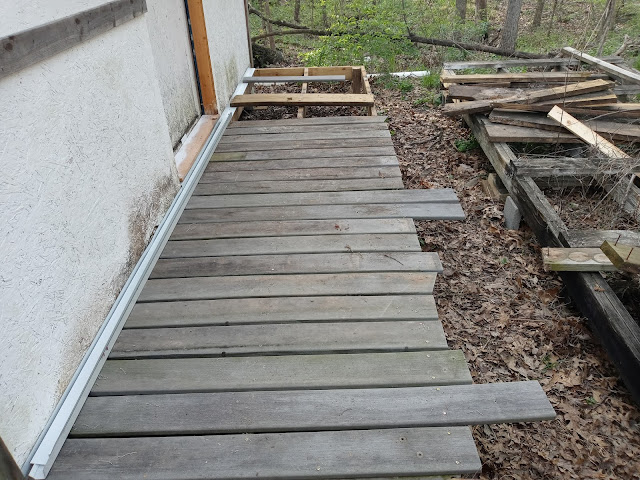 The boards had started to rot, so Hick tore them off to rebuild his porch. His intention was to buy some new boards at Menard's or Lowe's. Then he discovered that lumber prices have gone up 250 percent. Heh, heh. I could have told him THAT, if he'd asked, and waited five days for me to read it in the news.
Anyhoo... Hick refused to pay so much for wood, and salvaged some that he'd saved when he dismantled the deck of Back Creek Neighbor Bev. No, he's not leaving them at odd lengths like in the picture. He's going to drop a chalk line on there and saw them off.
As you can see, the side of his shack themed shed has also suffered water damage. The solution for that is to cover it with a 2 x 6 board, repaint the whole side, and extend the porch farther over the side so rain will pour off onto the porch, and not get blown in against the wall. He worked on it all morning Tuesday, when we had bright sun and temps up to 81 degrees. 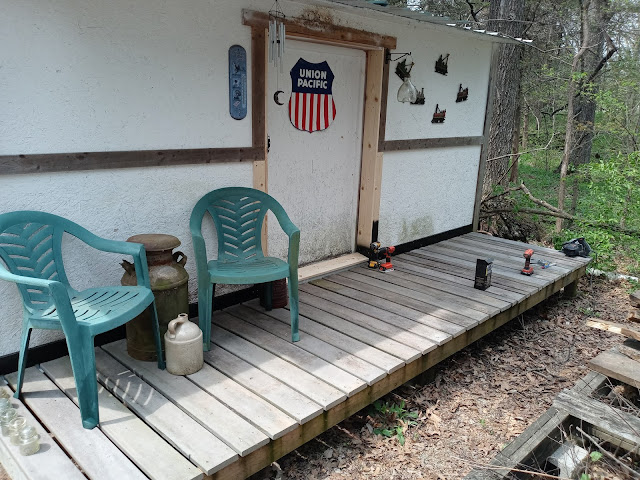 He sawed off the porch, now with a half-inch gap between the boards. The 2 x 6 board is in place, some of it unseen down under the edge of the porch, the rest painted black. I see new trim around the door, but it seems as if another coat or two of paint might be forthcoming. I think the original plan was to paint this shack themed shed a maroon color, like an actual railroad car. Maybe that's on hold. 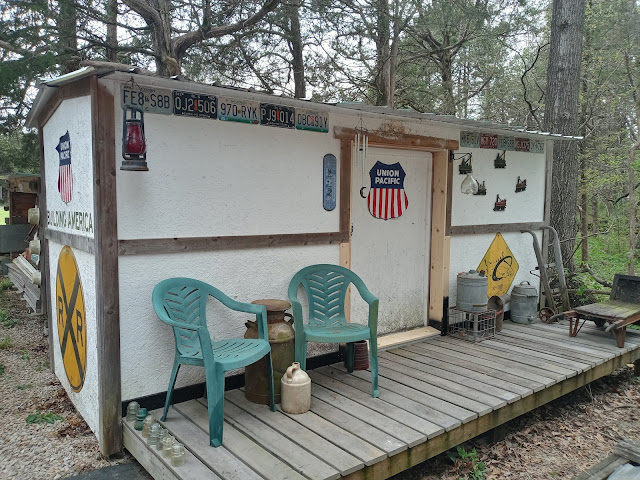 Here's Hick's final photo from Tuesday. He's added more accoutrements. As for the paint-thirsty walls, I do know that Hick had a story of looking for paint at Lowe's, seeing a tiny container for $12, then spying a GALLON on top of the shelf for $12. So he said he took the gallon, and the guy mixed it for him, and he only paid $12. I didn't listen close enough to remember the color. I DO know that it rained all day Wednesday. So I doubt the new paint is seen in this picture.
You can see that Hick has extended the roof out over the porch. I wouldn't want to sit under it during a rain, though. Not even taking swigs from that moonshine jug.
Posted by Val at 1:01 PM