There's been a penny deluge in Backroads! Here a penny, there a penny, everywhere I turn a penny! Not that I'm complaining.
SATURDAY, March 27, I could hardly take a step without tromping on a penny. It all started in Orb K. This penny was not a good omen. 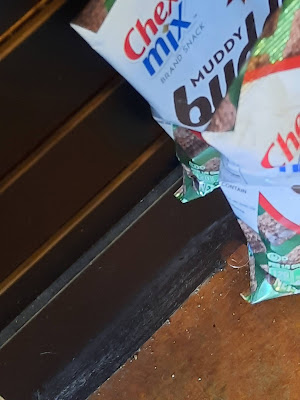 THE ONE THAT GOT AWAY! My toe could not scoot that penny out from the wall at the counter. It was trying to crawl under the counter! So I left with a partially broken heart, and no penny.
Don't despair! At my very next stop, the Gas Station Chicken Store, a consolation gift from Even Steven awaited me. 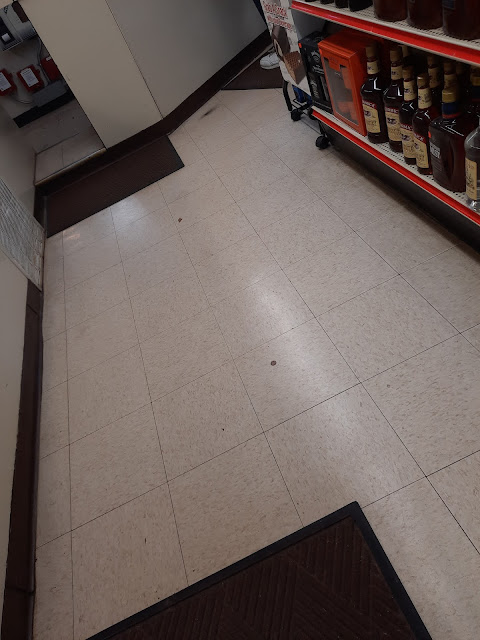 Heh, heh! That must have been foreshadowing. That penny is located where I was standing later in the week when my rightful turn in line was usurped by Flannel Shirt Kenny Rogers! Disregard that thing closer to the counter. It's a dried leaf. 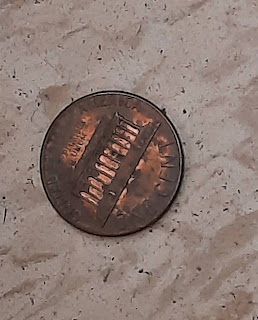 It was a face-down 1984 penny. With poor hygiene. Not that I'm complaining.
But WAIT! From there I headed over to the Backroads Caseys, and hadn't even reached the door when another penny clamored for my touch! 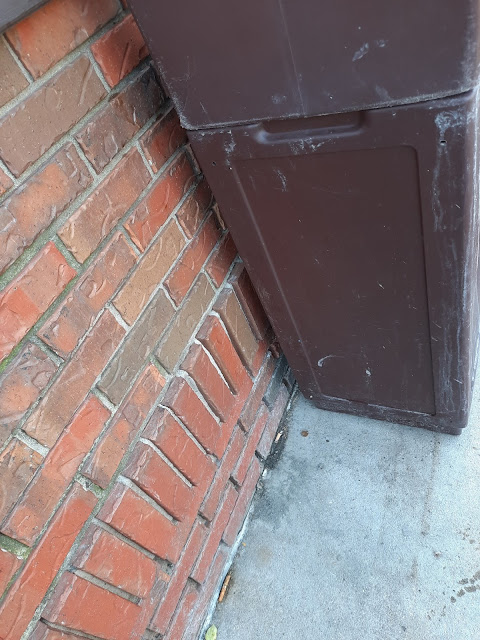 I had no qualms about putting my lovely lady-mullet next to the trash can, and letting my ample rumpus wave in the breeze. 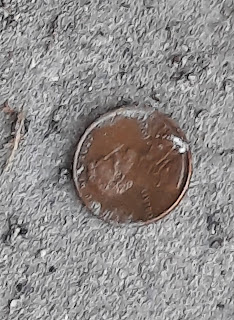 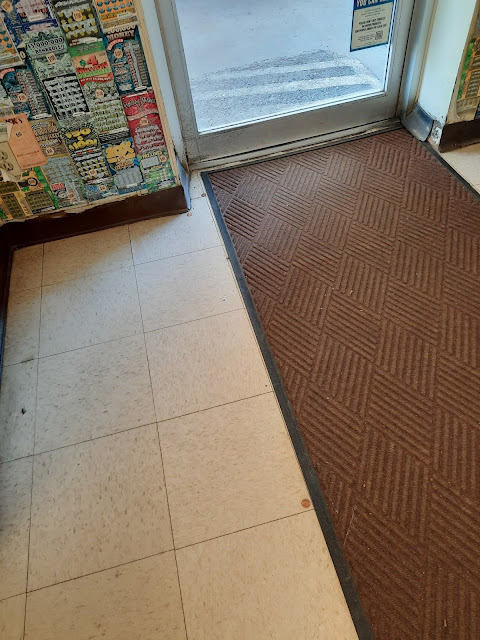 Look at that beautiful sight! Pennies as far as the eye can see. At least Val's near-sighted eyes. 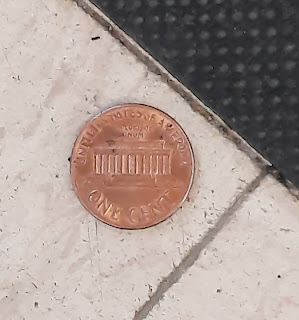 Nearest me was a face-down 1999, shining prettily. 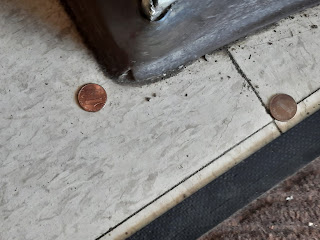 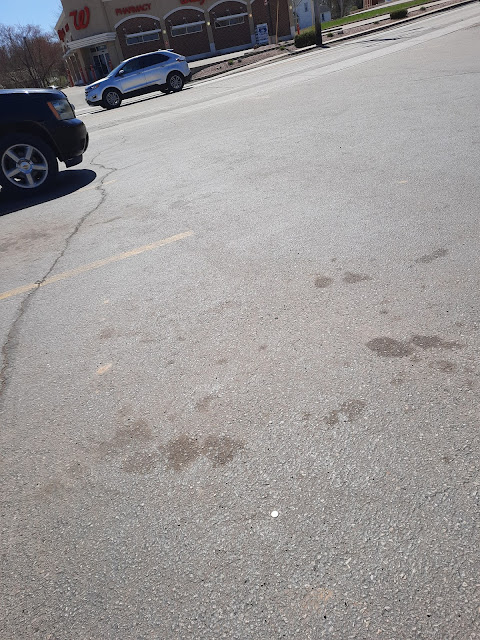 As I came out, truck gone, walking my usual path, I saw the glint of a me-penny that was unmistakable. 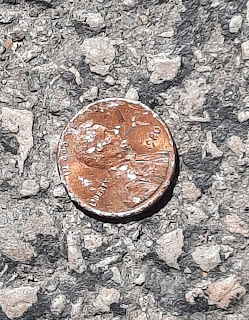 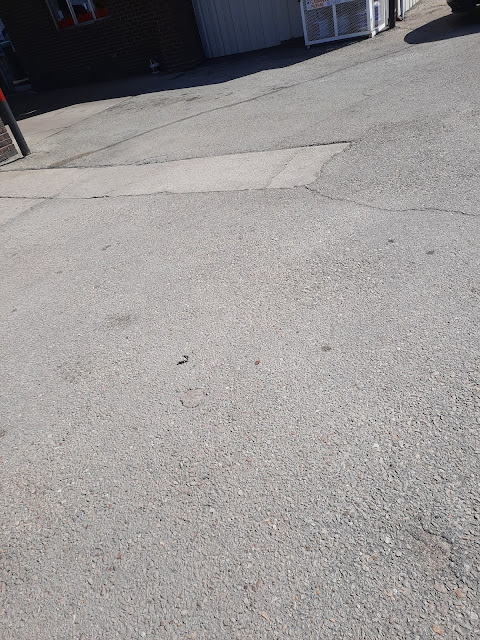 What a long walk for Val! That's because of the van you can see a front tire of, pulled nose-in to the parallel-parking handicap space beside the Gas Station Chicken Store! I was a bit put-out by this clown, who did not have a handicap plate nor placard (not judging, I don't either, and maybe he had gimpy knees like me), but occupied this space for over 30 minutes! Yes. 30 minutes! I went by, and saw my space taken, so I did my Country Mart shopping first. But he was STILL THERE when I came back. Now we know why. I would have missed this penny if I'd parked over there. 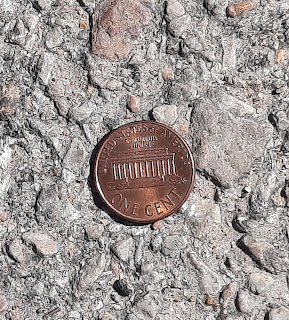 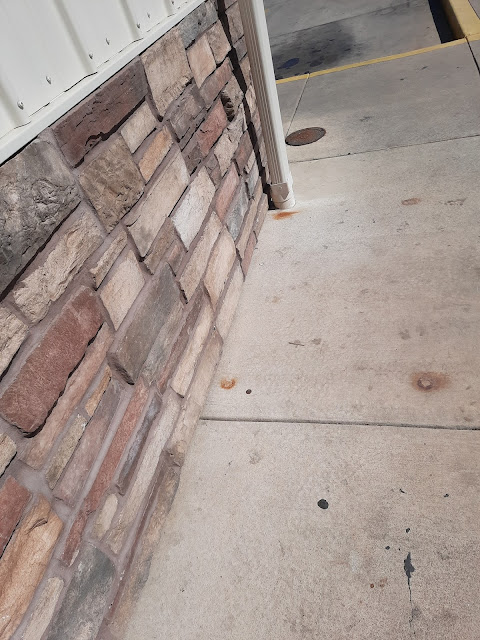 Please disregard the penny impersonators. This penny is by the rust spot against the building. But wouldn't it be cool if the sewer grate at the corner was a GIANT PENNY??? 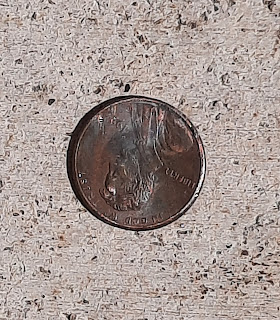