If my bankroll was a rumpus, it would be overly-ample these days! That decision to leave the not-mine $10 on the Country Mart lottery machine last Wednesday has proved quite profitable in the karma column. On Tuesday, Hick took us to the casino. Even Steven was along for the ride.
On my second slot, I mined the elusive $200 nugget on Wild Wild Nugget! The Pony chastised me in A-Cad on the way down there, for saying I was planning to play "Gold Gold Nugget." I guess my subconscious knew what was coming. 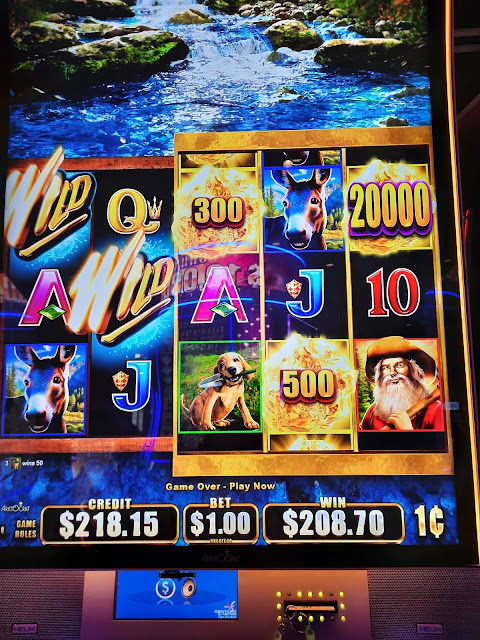 It's hard to land ANY nugget, much less get them all the way across so you can get paid for the last column. Ain't it a beaut? That earned me $208.70. It has already switched over to the credit box. I had $10.15 in there when I hit this Wild Wild Nugget. Betting $1 a spin.
I wanted to play my Wonder 4 Tall Fortunes slot next, with Miss Kitty, but as I hobbled over, an old man jumped up and stepped around the corner and took it! Meh. It wasn't so much not getting on the slot as it was wasting the steps and being almost there. I headed back towards the restaurant area to play my new favorite, Jackpot Streak: Garden of Amazon. 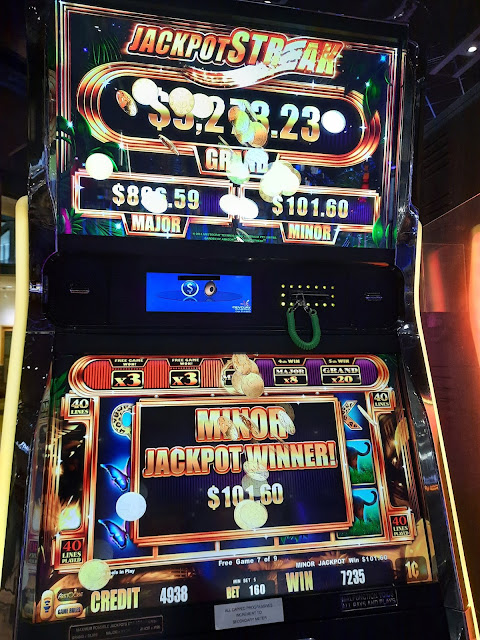 I played a long time here. I hit several jackpot streaks, keeping my money even, but not enough to cash out and save. The Pony wandered by, when I was in the midst of another streak, and caught my Minor Jackpot win of $101.60. It's still counting up in this picture. I had gotten my credit up to 49.38 after putting in a twenty in the beginning. I was betting $1.60 a spin when I hit this jackpot.
From there it was time for lunch. The Pony ordered nothing, because he was full of McDonald's breakfast. Hick had the pulled pork sandwich and curly fries. Again. 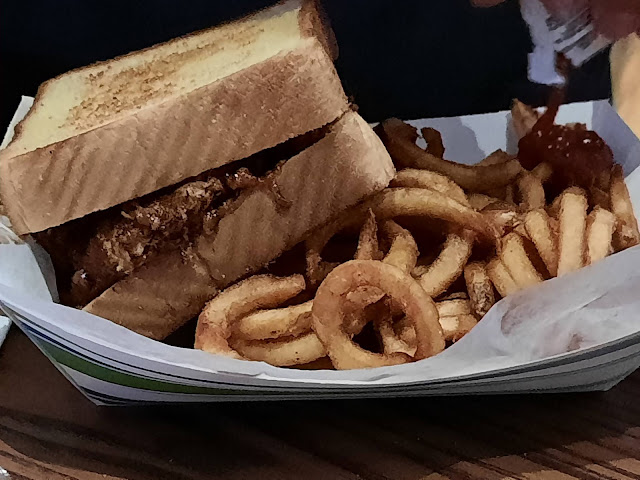 Hick had enough BBQ sauce on there to scrape off and save for my sister the (former) ex-mayor's wife! [He was recently elected mayor again--and I DON'T mean Hick.] Also, Hick complained that "There's too much meat on this sandwich! Half would be enough. You can't hardly fit it in your mouth." Well. When I used to get that meal, I ate the meat, and part of one Texas toast. The other I gave to The Pony. Here I caught Hick in the act of ketchuping his curly fries. 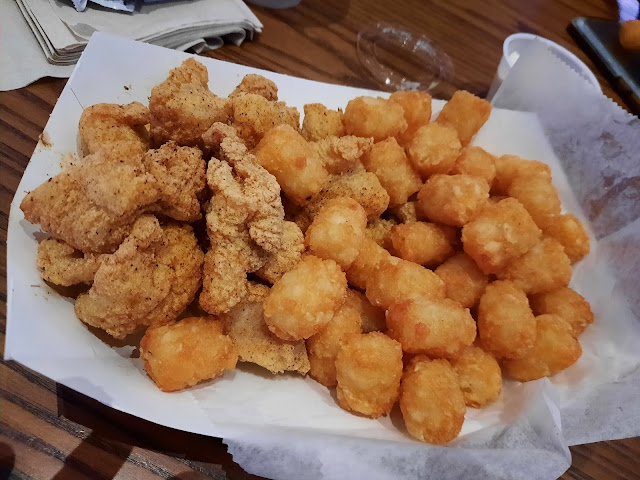 I had the catfish nuggets and tater tots. The nuggets are buried under that mountain of tots. The Pony helped by eating some tots, which he dipped into my tarter sauce. I couldn't finish all of either. Since Hick didn't make a clear plastic purse of his pie (plain cheesecake) container this time to carry leftovers, we sadly threw away the dregs of our meals.
These food pictures look so dull! I don't know what was wrong with my phone camera. I guess it was all amped-up from taking colorful slot machine pictures, and couldn't muster the effort to make our food look tasty. Sheesh! It looks like we were having lunch with Tom Sawyer and Becky Thatcher in McDougal's Cave. Us eating pulled pork and catfish nuggets, and Tom and Becky eating picnic "wedding" cake.
After eating, we returned to the casino floor for another hour. I was able to get on my Wonder 4 Tall Fortunes with Miss Kitty. First of all, I hit several Tower bonuses. That never happens! I hit them on all three games I played. Buffalo Gold, Indian Dreaming, and Miss Kitty. The only one worth documenting was Miss Kitty. 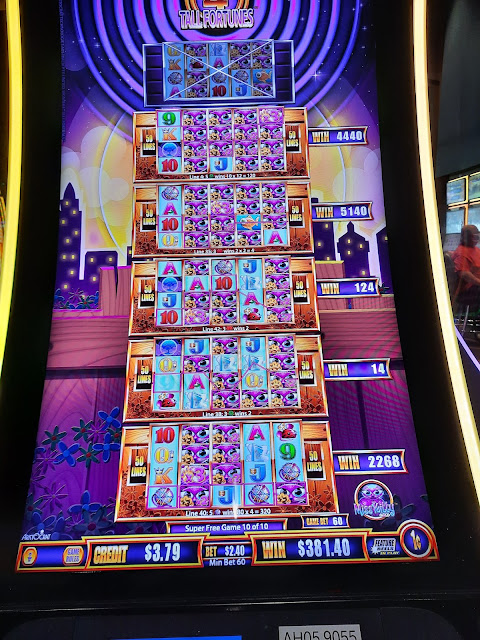 I didn't even make it all the way to the top of the tower, but the results were pretty good! That's the end of the bonus, Game 10 out of 10. It paid me $381.40. I had fed the tower a few twenties, and had $3.79 left when I hit this bonus. I was betting the minimum on this game, $2.40 a spin (which is 60 cents for each of the 4 games. It IS called Wonder 4 Tall Fortunes).
I was the big winner for the day. Of course not all of that made it out the door with me. You have to spend money to win money. But I had every bit of my casino bankroll back, plus winnings in the mid three-figures (not counting the decimal places!). Even Steven shunned Hick. He lost $50. I'm sure he'll make it up in sales in one day at his Storage Unit Store.
The Pony was not the biggest winner, but he hit the biggest jackpot. In fact, it was while sitting right next to me at Wild Wild Nugget when we first got there. He was playing Pompei, making me jealous as he raked in the cash. 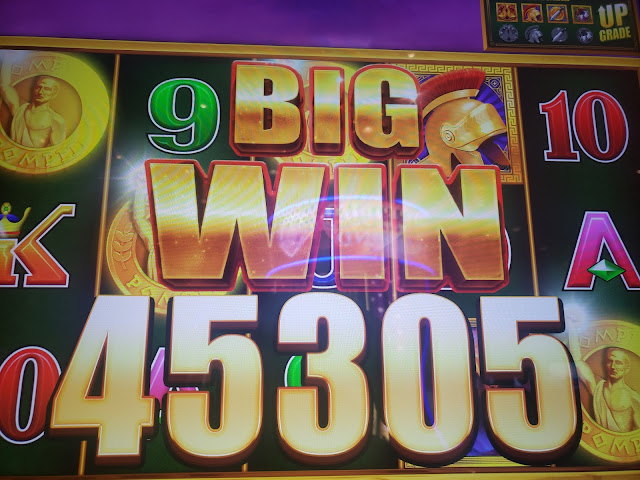 The Pony took that picture for me. He's got a problem the opposite of Hick. Whereas Hick takes a picture with a tiny subject in the dead center, and way too much scenery surrounding it... The Pony has a problem with EXTREME CLOSE-UPS.
Anyhoo... his jackpot was $453.05. I'm not sure what he was betting, since I don't play Pompei. I'm guessing it was somewhere between $1.00-$2.50 a spin. He played back a bit more of his winnings than I did, but then again, he has less of a casino bankroll to start with. In fact, he deposited his $800-something winnings into his bank account from his solo casino trip on Friday, April 2. So he's in the plus column lately.
Yes, I'm going to ride this good-karma gravy train until it runs over the edge of a cliff. Then I'll jump off and take a solo side-car down the tracks until another gravy train comes along. A streak never lasts forever, whether it's winning OR losing.
Posted by Val at 1:03 PM