To Squeal, or NOT To Squeal

Now that The Pony has accepted employment with the USPS, my hands are tied when it comes to complaining about the USPS. Right? I wouldn't want my actions to shine an unfavorable light upon The Pony during his 90-day probationary period! Though my current longed-for complaint would actually be HELPING the USPS...
Monday the 19th, I parked T-Hoe in the road (I'm entitled, I LIVE here!) and walked around to look in EmBee for our mail. I pulled out a couple of "magazines" (as the boys used to call catalogs), and the bill for SilverRedO's payment, which was DUE on April 15. Good thing I paid by phone on the 6th when I figured the statement would arrive too late for mailing.
But that's not my complaint! Not a statement reaching me over two weeks later than it used to. Nope. My complaint is about what remained in EmBee. 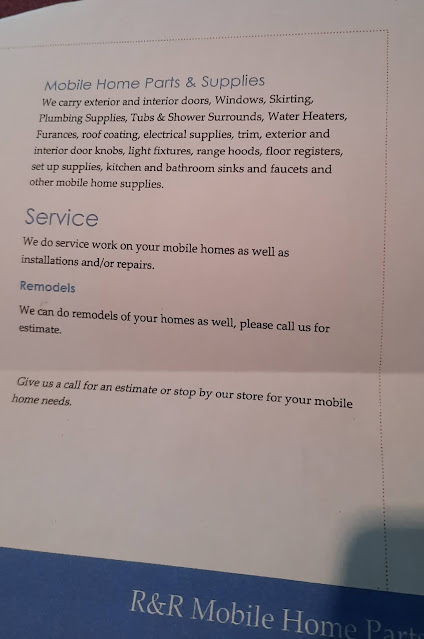 The USPS is totally off the hook! SOMEBODY is stuffing mailboxes with advertisements for their business. I'm pretty sure that is a federal offense. Once you put up a mailbox, it becomes the property of the USPS. Nobody can legally put stuff in there, except for the USPS. I know this, because I looked up the statutes many years ago, when a high school student was bragging about wiping his butt, and stuffing his underwear in a certain person's mailbox.
Anyhoo... this FLYER (I use the term loosely) was stuck to EmBee's innards like skin on pudding! (If you're old enough, you'll remember that.) I couldn't get that paper out. EmBee is made of metal pipe, about 6 inches in diameter. This piece of paper had unfurled itself inside, and I couldn't get a grip on the edge or corner. I must have spent 5 minutes trying to fish it out. I finally jammed it against the back wall, and got thumbnail under the front left corner. Just enough to wrinkle it up, press, and get a folded piece I could grab.
Of course Mr. Mobile Home Businessman wants to advertise for FREE! Rather than pay for digital or print ads in the local papers, or for radio time. Or get a proper advertisement to send out by (PAID) bulk mail.
I really think the USPS might be interested in informing Mr. Mobile Home Businessman that he is stealing their services, by using the receptacles designated as their own. When I was in high school, there was a big flap about the local newspaper being put in boxes attached to the sides of the rural mailboxes. Nope. Not allowed. So my dad had to put the newspaper box on a separate post beside the mailbox.
Anyhoo... I'm going to refrain from inserting myself into this cause. The timing isn't right, what with The Pony's recent hire. I know I'd have to give my name, which is not all that common around here. So another criminal escapes. Not due to Val's spinelessness, but due to her desire to allow The Pony an unobstructed release out of the starting gate.
Yes, I cut off the town and address from the picture. Hick agreed that such advertising is frowned upon. Although he was more ticked-off that: "I guess he seen a gravel road and figured there's a bunch of trailers up in here." I can only think of 5 or 6, out of the 49 households. I know the 49 number because of the electric company reporting how many lose power when one of our poles goes down.
More complaints than business will result from Mr. Mobile Home Businessman filling our mailboxes with illegal ads. Minus one, of course.
Posted by Val at 1:02 PM