We all agree that The Pony will have to get used to the physicality of his post office carrier job. But it could be worse... 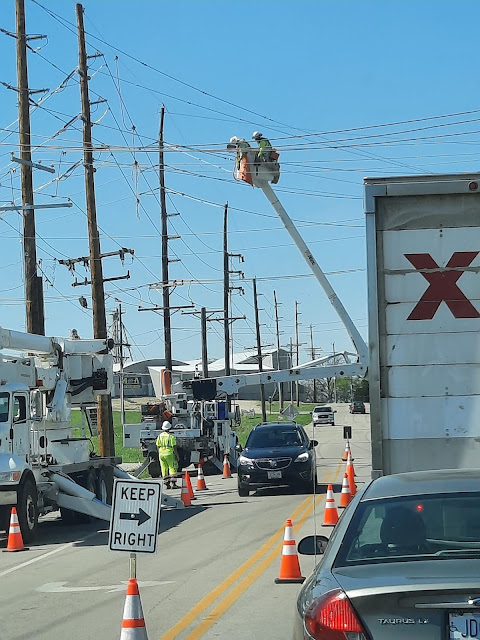 In the two-block drive from the Gas Station Chicken Store to Country Mart, I had to wait for these electric crews to snip a wire. Seriously. That's what they did. There are two men in that bucket. The one you can see had a giant pair of bolt-cutters. Looked like the ones our custodian used to bring out when he had to cut a lock of a student's locker. Only bigger. Good thing there wasn't juice in those wires!
By the time I got this picture, they were folding up the bucket to move it out of the way. In the background is the big gray building where Neighbor Tommy got his first job. The rat poison factory.
Anyhoo... I wouldn't want The Pony up on a lift cutting electrical wires. Nor working in a rat poison factory. He should be able to adapt to walking and carrying. The driving part will probably be hardest for him. He got his training information on Monday. Three days down in Casino Town, and four days in Springfield. Then a couple of job-shadowing days back here in the local post office where he will work. All paid hours.
Of course he will still be seeking chemical engineering jobs in the meantime.
Posted by Val at 1:06 PM