In Case You Doubt That Even Steven Is Looking Out For Val's Finances...

Remember last week, when I discovered that somebody had left $10 credit on the lottery machine in Country Mart? And I tried to tell the cashier, in case they came back looking for it? THAT WAS THE RIGHT THING TO DO.
Not only because the very next day, Even Steven rewarded me with TWO $50 winners. But because on Monday, Even Steven further showed his appreciation for my attempted good deed: 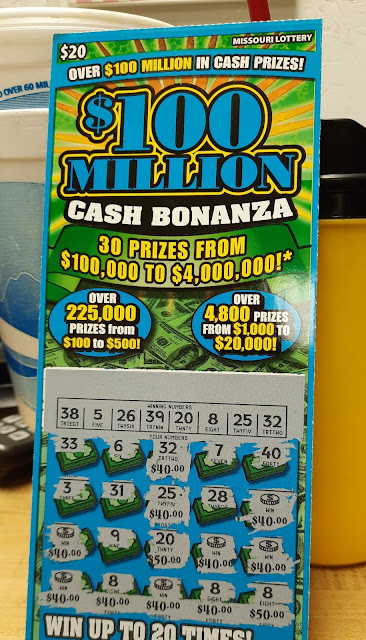 That's a $500 WINNER, baby! Those don't come along every day. In fact, the last one I had was back in 2017. I knew when I scratched off 12 matches that something good was afoot. I sent a text to The Pony to see if he wanted to watch the reveal. He didn't reply, so I set it aside, and moved on to my $3 scratchers.
I've been allowing myself one of these big ones occasionally since my two $50 winners. I got one of these tickets Saturday [# 001 on a roll that goes from 000 to 029], and won my $20 back. Then I skipped a day, and felt like the time was right on Monday. I got it at the Gas Station Chicken Store. [# 017] It's the only place that still has this very old ticket.
I hadn't even finished my $3 scratching when I heard the thump of The Pony's hooves on the 13 rail-less basement steps.
"Did you start yet? I JUST NOW got your text!"
"No. But I'm ready. Let me put the song back on that I was listening to when I scratched it."
[Not that I'm superstitious or anything... Let the record show it was Bob Dylan's "Shelter From the Storm Take 1," the version that plays over the credits at the end of the movie Jerry Maguire. This is it, but my track from Spotify had a better sound.]
"Look. 12 matches! I KNOW they don't have a $120 winner. So it will be better than $10 under each symbol."
OH MY GOSH! The first one had $40 under it! The Pony was quick to calculate.
"I think you have a $500 winner. I bet it's ten of the $40, and two $50."
The Pony was right!
Now I'm living on Even Steven's credit. I have to do $500 worth of good deeds for a while. I'm okay with that.
Posted by Val at 1:07 PM