Val has retaken control of the catbird seat! Winny days are here again!
Monday was SUPPOSED to be the day new lottery tickets came out. It's a whole thing for Missouri Lottery. They call it MO Money Monday. Hype it up. As IF people who buy scratchers really need any extra incentive...
I'd had a pretty good day in the midst of my current losing streak. A day in which I won back more than I spent! I took my winners to the Gas Station Chicken Store around 3:00 on Monday. Plenty of time for them to get the new tickets in their glass case at the counter. They're usually the first store to put out the new tickets.
But NO! Nary a new ticket to be found! The Woman Owner was as discombobulated as Val, when she had to give change back! I usually know what I'm buying, and plan for my purchase to come out even with what I've cashed in and what I've bought.
"Well. This upsets my plan. So I don't know HOW this change is going to go!"
It felt so wrong.
"You'll have to take it up with UPS. They were supposed to be here hours ago. Nobody knows where they are."
They knew on TUESDAY! I don't know how the Gas Station Chicken Store got the new tickets. Maybe the lottery (heh, heh, I keep typing that as LOOTERY) sent out replacements. Because Man Owner told me,
"We found out where our tickets went yesterday. To MISSISSIPPI! And right now, they're in TENNESSEE! Not just ours. Tickets for 120 stores!"
Good to know. Because that first day of tickets will be arriving within the week, I'd think, which means the Gas Station Chicken Store will have a backup supply of winners! I'm pretty sure the first batches of tickets are always win-heavy, to make people want to buy the new ones. Then it seems like after the first week, it's a long time between winners.
They say it's totally random, but looking at the monthly map of winners, you can see how the batches move from one geographic area to the next. SOMEBODY knows where they're sending winners. I mean like the $1000 winners, that have to be claimed and not just cashed at the store. You'll see one town have three or four, and then the next month a different town.
Anyhoo... I finally got my new tickets on Tuesday. There were three new kinds. My $5 ticket lost, as did the $2 and $5 tickets I gave The Pony. But I had a big winner: 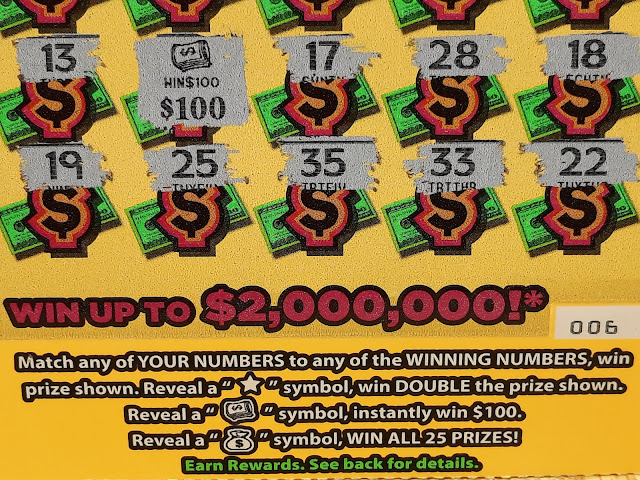 I got the bankroll symbol, which is an instant $100 win! Of course, the ticket itself cost $20, so not a gigantic profit. Still fun to win, though! 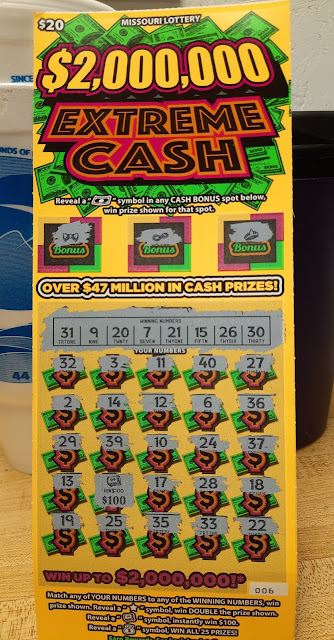 I know what I WON'T be buying tomorrow! At least not from the Gas Station Chicken Store. My winner was #006. There are 30 of these tickets per roll. 000 to 029. So I'm not buying anything until a new roll starts. I'm pretty sure this will be the biggest winner on it. They'll tell me what number it's on if I ask. I only do that at the GSCS. I'm a regular, you know...
Posted by Val at 1:04 PM