The Lengths Hick Will Go To

A bad storm rolled through here on Monday evening. As opposed to a good storm, heh, heh! It blew up all at once. Black sky, lighting, thunder, wind, and RAIN! Lots and lots of rain. Hick rushed out to release some water from Poolio, which he'd been meaning to do for a few days, since our last early-morning deluge.

While dehydrating Poolio to make room for more hydration, Hick noticed that the downspout was clogged. He had the bright idea of taking The Pony out with him, and climbing on a ladder, to dislodge whatever was inside. Most likely leaves, though we don't have trees very close to the house.

The Pony objected, not particularly wanting to stand in the rain like Hick, and claiming that the ladder needed the rungs tightened. Hick agreed to wait until Tuesday morning for that chore. Which wasn't really an improvement for The Pony, since he likes to sleep in.

Once The Pony retired to his nightly 2-hour whirlpool bath, Hick decided he might as well do the unclogging on his own.

"It looks like the rain is slacking off. I could do it now."

"Who will hold your ladder? Not me! Can't you use something like a snake? A plumber's snake? Won't that twist around and get it loose? Without climbing a ladder?"

"I know! I can use my fish tape. I can poke it in from the bottom. That'll probably work."

Let the record show that I have no idea what fish tape is. Hick has been talking about it lately, in terms of pulling electrical wire. I have a feeling it's not used for fishing. And it's not really tape. It must behave like a plumber's snake, since I gave Hick that idea.

"Well, yeah. I don't want to walk through that muddy mess." Hick went to look out the kitchen door. "It's still raining a little bit. But I can go."

At that moment, a spike of lightning flashed out the living room window.

"Oh. I'm not going, then. I don't want to be standing by a metal downspout with lightning!"

Especially since it knocked out our house phone and tripped some breakers a few weeks ago.

Anyhoo... Tuesday morning I got up to find THIS on the back porch, by the kitchen door: 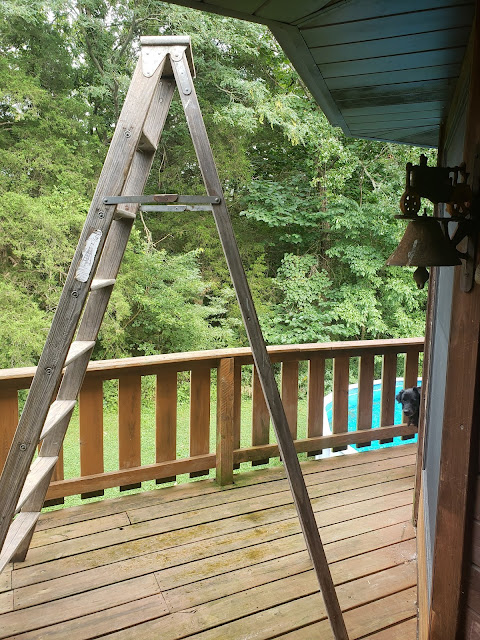 I had neither seen nor heard from Hick. This was not the downspout area he'd been talking about, but we had a leak in the metal roof above there. Right after the roof installation. That's a long way down to the back yard. 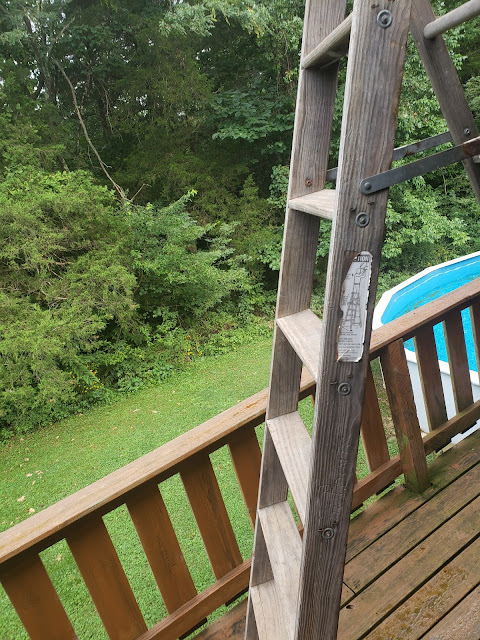 I hoped Hick hadn't fallen. Hoped he wasn't sprawled awkwardly 16 feet below. But I didn't look. Interrogation of The Pony revealed that Hick had NOT asked him to come help by holding the ladder.

"No. He never asked. I heard him and some other guy outside my window around 8:00."

I'm pretty sure Hick left the ladder there so I would see it. Possibly with hopes of triggering me to rush to the rail to look over, possibly skidding on the wet boards, and plummeting to my death! I'm pretty sure Hick is trying to kill me. This would be a perfect set-up!

Now if I could only figure out how he summoned that storm...