Hick Has An Unrefined Palate

Last week at the casino, each of us had a coupon for $5 off a $10 food purchase. Not free, but at least half price! Unless you have to get pie, like Hick. I didn't get a picture of Hick's pie, because he had already eaten it when I got out my phone for pictures! I blame the order-taker, because she gave Hick his pie as we went through the line to order. She allowed him to eat his dessert first! Anyhoo... Hick chose Coconut Cream Pie, even though he has professed for 30 years that he doesn't like coconut.

Hick chose his regular lunch order there, the burger with pepper jack, and fries. I promise, there WAS a burger under that lettuce! 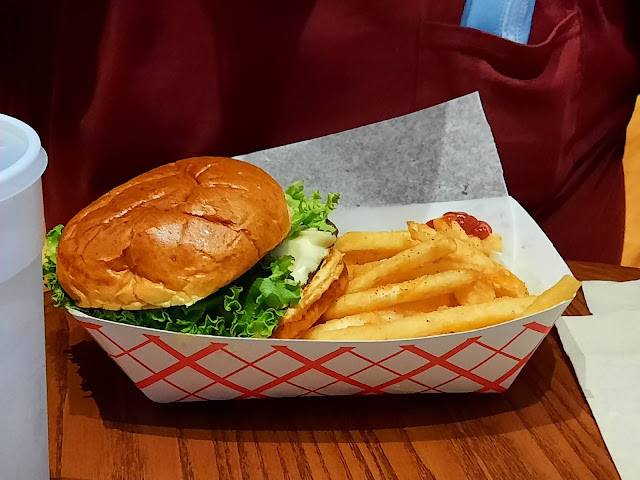 Of course he ruined his fries by adding pepper. He does that since he saw Genius do it once, and The Pony has followed in their peppery footsteps.

The Pony stepped away from the burger, and ordered a new special, the Fried Shrimp, and fries. 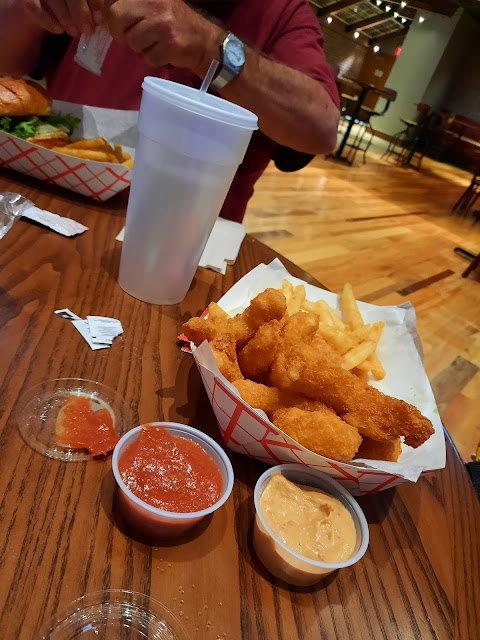 There were SO MANY shrimp in that basket! The Pony couldn't eat them all. I had one, and Hick had three. The cocktail sauce was tasty, but I wouldn't taste the other kind. The Pony liked it better. I don't remember how he described it. My phone photo doesn't do justice to those shrimp. I had a bad angle. And I DID show Hick's meaty forearm...

I gave up my Chicken Club Sandwich in favor of a Philly Cheese Steak Sandwich. It was real, and it was spectacular. Though I'm sure the denizens of Philadelphia might beg to differ. 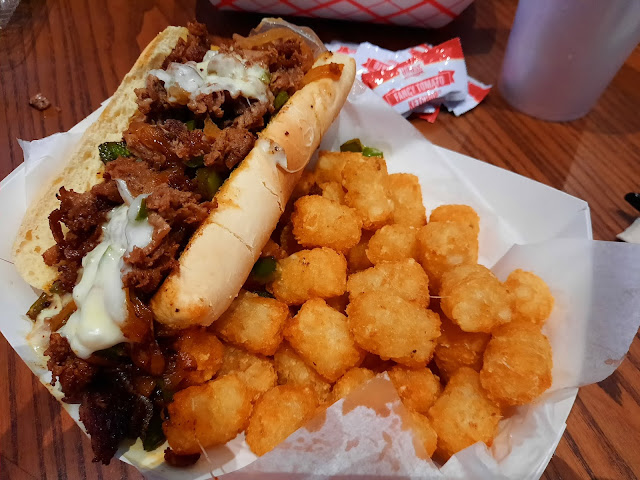 Look at that monster! I had to eat it with a (plastic) knife and fork. No way could I have picked it up. The tater tots were also delicious. They fry them nice and crispy. A few strands of my Philly's cheese was stretched across them. It was a delectable mess.

Lunch was the high point of our casino trip. We all played in the slot tournament again, but I was not a Fourteenthampion this time. I only earned 126,000 points. Sometimes, the odds are not remotely in my favor. My slot machine didn't give me enough special balloons to pop for bonus points. Bad luck of the draw!

The Pony got 167,000 points, and was in 10th place when we left. I guess the later rounds had some good totals, because he did not place in the top 16 for a prize, even though his score was higher than mine that won me $40 last time.

Hick won about $40, but not in the slot tournament. So he definitely had a good time. The Pony and I enjoyed ourselves despite coming home poorer.

On the plus side, we were all so stuffed that we didn't even stop for Krispy Kremes on the way home.
Posted by Val at 1:08 PM