I Cried Because I Got Stuck in a Rut by a Passing Garbage Truck, and Then I Met a Pony Who...

The Universe conspired against me on Wednesday, when my weekly errands were fraught with difficulty.

The bank line of TWO CARS took me 15 minutes to get my turn.

A red sports car blocked the parking lot at the Sis-Town Casey's. I thought it was an inconsiderate driver, taking his half out of the middle, until I noticed that it wasn't moving. And it was sitting at an angle with its nose down. After navigating around it to park by a truck that was sitting in half of the handicap ramp access, I saw that the red car HAD NO TIRE ON THE FRONT DRIVER'S SIDE. Not a donut spare. Just that tiny disc about the size of a frisbee, that the wheel gets attached to with lug nuts.

Then the Sis-Town Casey's had a problem with their lottery scanner. Of course the man at the other register wanted five Powerball tickets checked for winnings. So the clerk had to manually punch in a series of numbers on each one. Which left MY clerk standing and waiting to enter my two scratchers, which had no problem once she gained access to the terminal.

When I came out, the tilt-bed tow truck fetching the red car was parked semi-across T-Hoe's right rear flank. I was able to maneuver around it to escape. I almost made it home without further incident.

I heard my phone concertina (I'm using concertina as a verb, because that's the sound I've set for my text notifications) as I coasted T-Hoe down Mailbox Hill. Once I grabbed the lone piece of (junk) mail from the back of EmBee's throat, I closed her gaping maw, and started up the gravel road. NOBODY at the Creach this day, the driverless van I saw on the way out having disappeared.

Just past the bus-waiting shack, I checked my phone. I had a warning from The Pony:

"Bog truck hauling rock just went by in front of the house. Be careful."

That boy has his daddy's spelling talent sometimes. Well-versed in reading Hickinese, I knew he meant a BIG truck. The Rockers are back!

I was on the lookout, and sure enough, just before I reached the flat waterfall entrance, here came a BOG truck. I was able to steer T-Hoe into the foliage and let it pass. Thanks to The Pony's timely warning. On I went, less than a mile from home.

Rounding the curve to climb Hick and Buddy's Badly Blacktopped Hill, I encountered our GARBAGE TRUCK. I was glad to see him, because our trash didn't get picked up last week (nor our neighbors'), so at least I knew our overflowing dumpster had been serviced. But now I had to escape this 0 mph game of chicken.

I had no choice but to guide T-Hoe across the deep rut on the right, left by the torrential storm of Monday night. It might have been about 2 feet deep. Lucky for me, T-Hoe's tire was of sufficient diameter to roll across the narrow (yet deep) gap, to rest on the other side.

Garbage Man gassed his giant vehicle and blew past me. I crept along until I could get T-Hoe back on the gravel where the chasm narrowed. The Pony later said he didn't have time to text me about THAT bog truck, since I turned into the driveway as soon as he'd retrieved the dumpster.

In burdening The Pony with my tribulations, he suddenly said,

"You think YOU had it bad? I got up from the new recliner, and something stabbed into my foot! All the way in! I had to sit down and pull it out. IT WAS ONE OF DAD'S TOENAILS!!!" 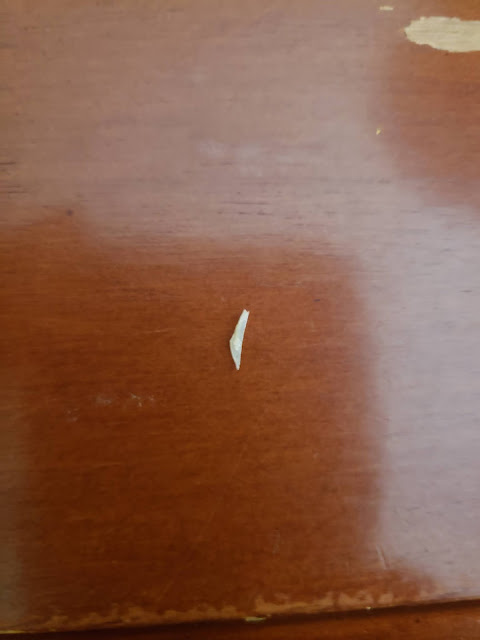 I cried because I got stuck in a rut by a passing garbage truck, and then I met a Pony who got stuck in the foot by his father's toenail.

I'd take him for a rabies shot if it wasn't so difficult to see an in-person doctor...
Posted by Val at 1:01 PM