I ran up on another CREACHER Friday, on my way to town. You might recall that a CREACHER is a person of unknown residency, enjoying the perks of our creek beach.

This creacher was walking out of the tree-arched pathway to the little flat waterfall. I noticed him because his large work truck was blocking the side of the road where rightful residents would be trying to drive, upon their return home. I slowed T-Hoe to a creep for a creep, since I couldn't see what was around the bend.

No, I did not get a picture. There was a car coming, and I had to use my wits to avoid it. I figured that guy was taking a pee, or maybe stealing mail! More on THAT another time. So on I went, to the end of the gravel road, where I stopped for my mail.

As I came back across the blacktop, that CREACHER was driving his big work truck out of our road. I guess he had finished his business. Although in reality, he had absolutely NO BUSINESS up in there, because he is not a resident. I climbed in T-Hoe to sort my mail, and saw the CREACHER park his large work truck on the bridge of the blacktop county road.

Something was amiss. What was he up to? I picked up my phone for a picture. 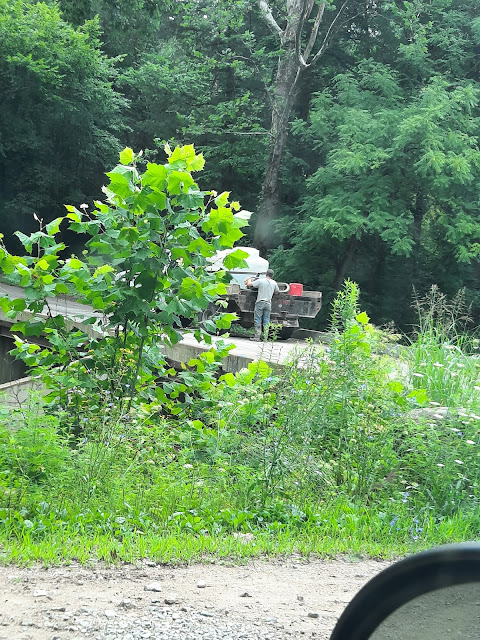 Whoa, now! What was CREACHER doing at the back of his large work truck? Was he handling his hose? Surely not! I decided this needed a better picture. So I zoomed in. 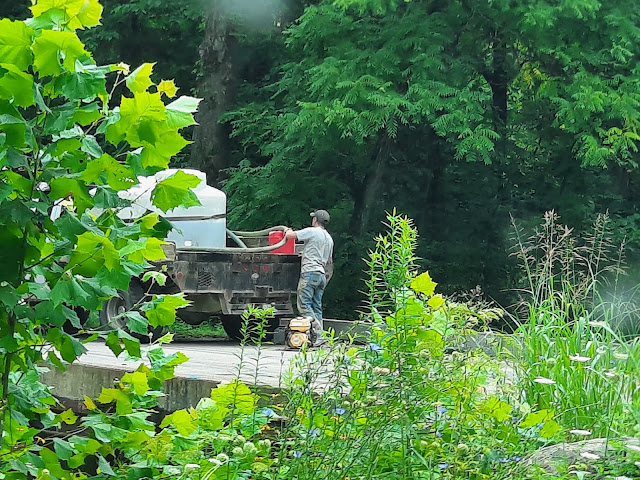 Yikes! Not only was CREACHER handling his hose roughly, but he was apparently planning to pump his fluids into our creek!

I assure you, that glacier blue liquid in the tank on his truck was not that color in real life. Here, it looks like blue PowerAde. Or the coconut flavor of a Sonic slush. In reality, it was a dark color. Like a slurry you might suck out of a... SEPTIC TANK! My heart beat a little faster, with a little fear and a lot of outrage.

CREACHER WAS PLANNING TO RAPE OUR ENVIRONMENT!

Don't think I was going to SAY anything to him! I had photo evidence. I'd let Hick handle it. Just when I started up T-Hoe, a car came up behind me. A lady parked ACROSS T-HOE'S BOW, and got out to cross the road for her mail. Leaving the door of her small black sedan wide open! My outrage at the CREACHER was so great that I barely cursed her. I had to back the eff up, and swing wide around her door. She was walking back with her mail, stinkeyeing the large work truck, as I got onto the pavement.

"Surely he's not dumping that in our creek."

"That's gotta be against the EPA regulations. He can hear us talking, too. And he's not stopping."

"I got a picture. But the company name doesn't show. And there's no license plate."

"It's a commercial truck. Plates are on the front."

"Well, I'm not driving back that way to get a picture." [How COULD I, with her car door open, preventing me from backing into the gravel road to turn around?]

On I went, up the hill towards town, feeling guilty about allowing our environment to be raped by that CREACHER.

My adrenaline was pumping, nerves jumping. Call Erin Brockovich! Call Karen Silkwood! SOMEBODY needs to report this guy! I suppose he had been scouting out the waterfall area, to see if he could do his dirty deed there, without being exposed to passing traffic on the blacktop county road.

What do you think Val did?