We had just left CREACHER, the environment-raper, with his hose dangling into the creek. Val and T-Hoe were chewing up blacktop, cresting the hill on the way to town, keeping one eye on the mirror like Carly Simon's vain song inspiration.

The farther I went, the more incensed I became. I was like a teakettle ready to boil. As soon as I got to the county blacktop highway (where the STOP sign was as lacy as a fine doily, from bullet holes), I turned left instead of right. I headed for the alternate route I use when the bridge is flooded, which takes me back to the scene of the environment-raping, coming in from the other direction. I started taking pictures for evidence. 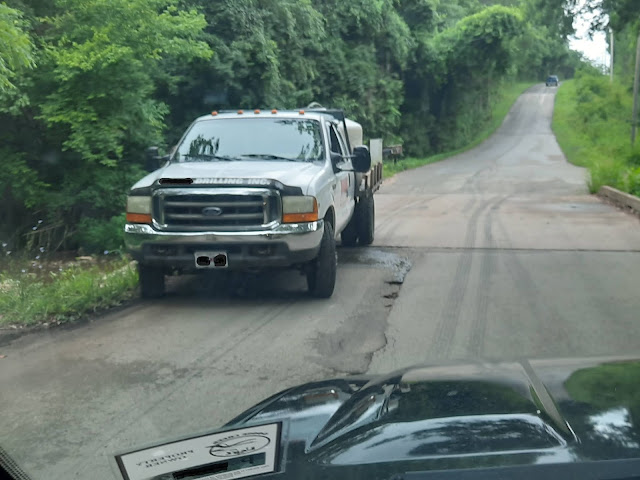 A black truck had been sitting sideways across the road at Mailbox Row. I guess he saw me stopping, and left saving the Creach to me. Or else he thought he was in the way. There he goes, up over the hill towards town. I wasn't satisfied with this picture. Maybe I wasn't close enough. I crept forward, for a closeup of the license plate. 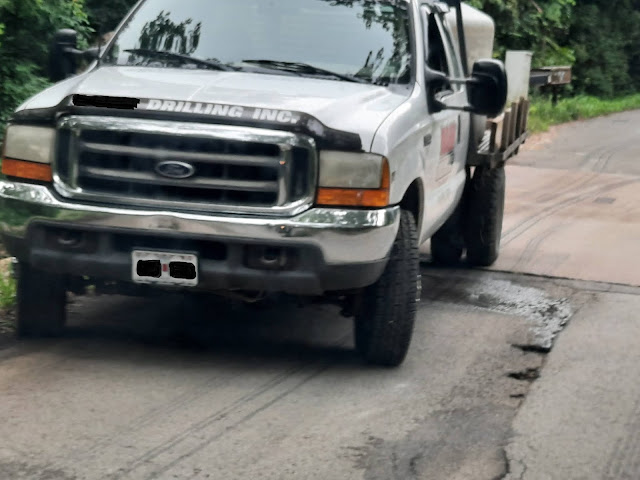 And also the name of the company. The CREACHER didn't seem at all concerned. I couldn't see him but I assumed he was still behind the truck holding his hose. Closer I crept, ready to roll up the window and take off if he... um... objected. Or jumped up and started swinging a bat at me. 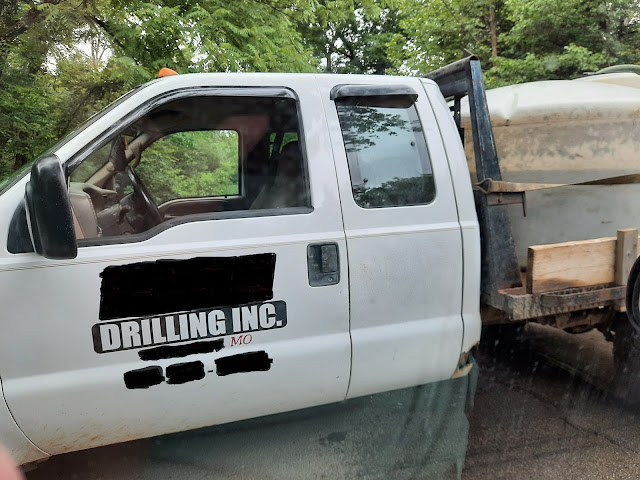 THAT should surely be enough evidence! Company name, town, and phone number! Notice the water in the tank? All that sludgy stuff? THAT'S what concerned me when I saw CREACHER getting out his hose. As I made my getaway, CREACHER was indeed crouched behind the truck, holding his hose, pump running.

I called Hick, still shaking from my bold crime-fighting mission.

"I did! I have several pictures. Of the guy, what he's doing, the tank, and the license plate and business name."

I was quite proud of doing my Creachly civic duty.

Said Hick. Who has had a plethora of shady friends doing odd jobs for us over the years. One who came out of his trailer with two pitbulls, pointing a shotgun at us when we stopped by to ask if he would do some concrete pouring and finishing in the basement of my $17,000 house. And another one who left us with a gaping hole in our front wall one October, covered with a blue tarp, because he got locked up in the county jail during the building of our computer nook.

Anyhoo... I didn't doubt Hick's declaration that such a drilling company would be sucking water OUT of the creek, not discharging sewage INTO the creek.

"Oh. That's too bad. Well, I don't mean TOO BAD that he's not raping the environment with raw sewage. I mean TOO BAD that I thought I was doing a good deed by catching him in the act, but I wasn't. I guess I'm not a Karen."

In hearing my story, The Pony said, "Oh, you're still a Karen alright."

"Because you thought he was doing something wrong, when he wasn't."

The Pony stands by his JUDGMENT on my intentions, when all I wanted to do was save the environment from a raping. I think that makes The Pony a Karen...