Our way home from the casino Tuesday afternoon was a Goodwill tour for Hick. He'd planned to stop at three separate stores, but was too busy making people mad in the fast lane to get over in time to take an exit.

The first Goodwill is quite close to the casino. Hick found an oil lamp there. My pictures aren't good, because I took them in the car. 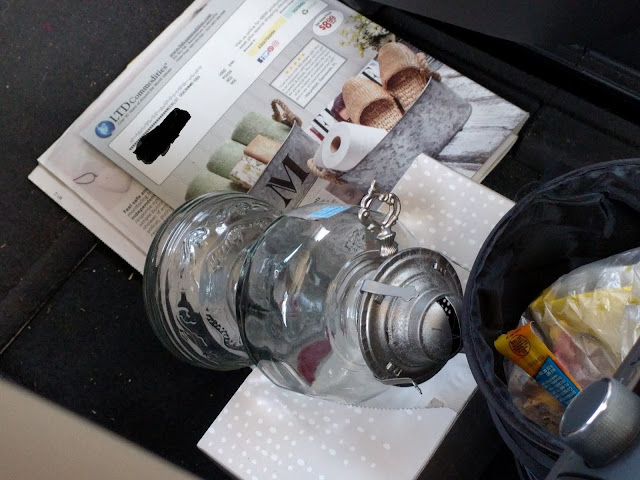 Hick propped his lamp on a box of Puffs Plus Lotion. He hasn't dumped the mini wastebasket since his trip to Oklahoma last week to help The Pony's professor. And I have no idea how he got my junk mail in A-Cad, since he doesn't pick up the mail, and I don't drive A-Cad. Good thing I noticed and Painted it out, or you all might have showed up at my address!

Anyhoo... Hick got the oil lamp for $3. It's missing its globe, but he already has a globe, and says that after he puts it on, he can get $8 for the oil lamp at his Storage Unit Store.

Hick found other treasures at the Goodwill halfway home. 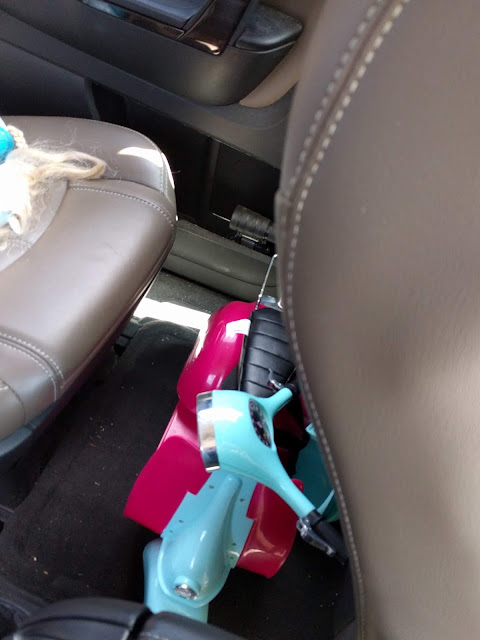 That's a little plastic scooter thingy. It was in perfect shape. The helmet was hanging on the handlebar, but with all Hick's sweaving, it fell off. You can see it on the floor, blue. Not for a child to ride on, but for an oversize doll. Heh, heh. I was thinking BRATZ, but looks like it's for the 18-inch OUR GENERATION dolls. I found one exactly like it on eBay for $41. Target seems to be the retailer, where the scooter is $29 new. Hick got his scooter for $4, and says he'll sell it for $8 to somebody's grandma, and make a little girl very happy.

Don't worry that Hick scalped somebody, or bought himself some hair extensions. Those tresses on the seat belong to... 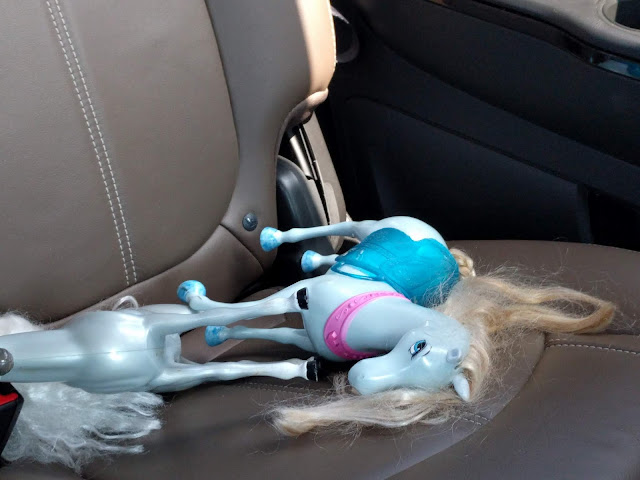 ...a horsie! Sorry I cut the head off that horse on the left. Don't worry, it won't show up in your bed. It's hard to take a picture over your shoulder while Hick is sweaving at 70 mph. Hick got one horse for $2, and the other for $1. He doesn't know why. He's going to ask $4 each for them.

Let's recap. Hick spent $10 on these treasures. He will be asking a total of $24. He is thrilled at the prospect of reaping a $14 profit.