"I went by my Storage Unit Store this morning to put some stuff in it, and my Owner Buddy said somebody stole a CAMPER on Sunday! It was parked at the back, with the other vehicles. Somebody drove through the gate. Broke it. They hooked up to the camper and pulled it off! He saw the marks where they dragged the chocks through the gravel for a ways. Anybody who owned it would have moved them chocks. And wouldn't have crashed through the gate.

He was walking around sometime Sunday afternoon, after most of us had left, and saw that the fence was down. He noticed the camper was gone, but couldn't reach the owner until Monday. She's a retired lady whose husband died. Her sons and her take it camping. Sad thing is, she didn't have any insurance on it. I told him, 'Dang! I wish I'd parked mine up here! I have it insured for $8000. That would solve the problem of selling it!'

My Owner Buddy watched his surveillance tape. It happened Sunday morning. In the daylight. He had pictures of a white flat-bed truck pulling the camper along the side street. It made a left turn onto the blacktop lettered highway, and came out this direction. I told him I know the guy down the road here has TWO of those white flat-bed trucks for his construction company. But I don't think he'd steal a camper. He doesn't need money. But one of his workers might have had the truck. My Owner Buddy said the police know of another truck like that out the road farther. They couldn't see the plates, though.

My other buddy gets up there early. He said he was there around 5:30 Sunday morning, and that he DID see a truck pulling a camper down that side street a little later. He didn't know they were stealing it. Just thought somebody came to get their camper. I guess they'd already plowed through the gate when he got there." 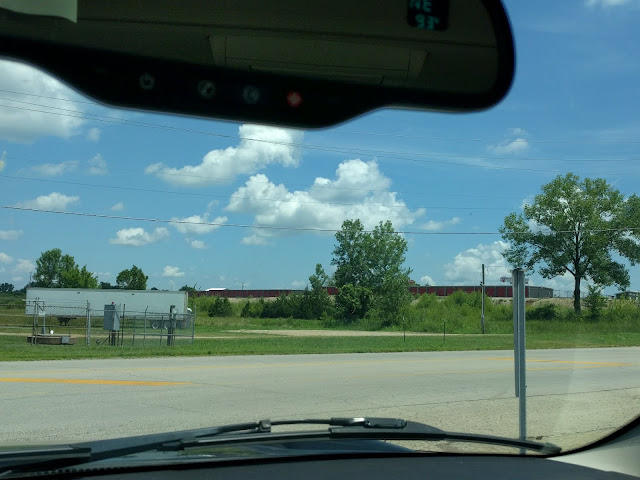 That storage unit compound is really big. Here it is, from the windshield of T-Hoe, up on the hill. It goes way back to that treeline. The units are in a U shape, with some more in the middle. Vehicles being stored are parked along the back fence, by the trees. You can see the little office on the far right edge of the picture. Hick's unit row, and the side street, are on the other side of it. Not pictured.

I couldn't get a better picture while driving. I was waiting here to pull out of Orb K. Good thing the fireworks people left, or their tent would have been in the way. That's their semi trailer full of fireworks, waiting to be pulled away. You might also notice in T-Hoe's mirror that it was 93 sweltering degrees when I took this picture.

"So he has all those security cameras, but couldn't get the plates?"

"Yeah. That part at the back is fairly new, where the vehicles are parked. He hasn't got around to putting up cameras there. Not too long ago, somebody broke in and stole all the batteries out of those trucks from the company that does electric. They were insured, though. My Owner Buddy says HE has insurance. He's going to see how much he gets for that camper. He said he might be interested in buying OUR camper, to give to that lady, because he feels bad for her."

Some people are all right. Others are just no-good ne'er-do-wells.
Posted by Val at 1:03 PM