Living In a Honey Badger World

Back when I was teaching, the kids had a favorite saying: "Honey Badger don't care!" Used when somebody was particularly ruthless in their speech or actions. They got if from a video going around, about a honey badger fighting a cobra.
When I venture out of the house these days, I feel like I'm living in a honey badger world. People DON'T CARE! They don't care about being rumpus-holes! They almost dare you to confront them on their rumpus-hattery! Not that I would, of course. Nope! I learned MY lesson after an old man had a fit because I politely asked if he was next in line, while he was standing off to the side shooting the bull with another old man.
Anyhoo... Thursday I stopped by the Gas Station Chicken Store as usual. There was a work van parked in the handicap spot at the side of the building, where I park to dart in for my 44 oz Diet Coke. Actually, the work van was parked in TWO spots, which are parallel parking. A lady in a gray sedan had parked behind him, kind of sticking out into the gas pump entry area. I went to the front of the van, to park in the rest of the space by the FREE AIR hose. I'd have parked over by the moat, but a truck pulling a bass boat was taking up that whole side of the lot. It's the only place he would fit. 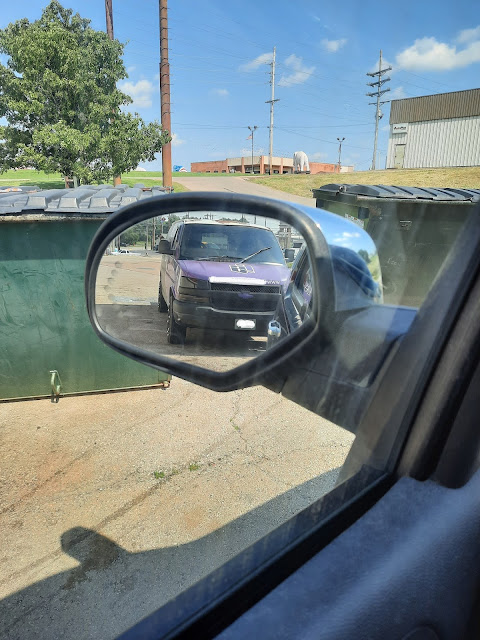 You can see the van there, in T-Hoe's mirror. Remember that objects are closer than they appear! I had backed up so as to be in most of the parking spot, and not sticking out in the road behind the store. I marked out the license number and the business website painted on the van. The guy was right there WORKING on a ladder between the van and building. He was not in the parking or driving area. His ladder was set up inside the concrete parking curb thingies. A fold-out red ladder, not a long one leaned against the building. He was doing something with the roof.
I'm not sure why he wanted his van right there. All his equipment was sitting on the pavement by the ladder. He could have parked over by the front of the lot, and not taken up that space. It wasn't a big deal for me to walk an extra 25 feet, but it was awkward to get into the space in front of the van.
When I came out, I saw that T-Hoe was blocked in! A lady in a white sedan had cut across T-Hoe's front bumper to air up her tires. I'm pretty sure she shouldn't have been using the FREE AIR that the Woman Owner used to have a sign for, saying you could only use it if you bought your gas there! Which she did not. Never went inside. The pumps are old-school. No card reader. You take the hose and lift a lever, and pay inside when you're done. They're quite trusting at the Gas Station Chicken Store. And have good cameras...
Anyhoo... I was not too pleased about White Sedan's parking technique. If it was ME, upon seeing that the air hose area was taken, I would have parked off to the side and waited my turn. NOT blocked someone in. 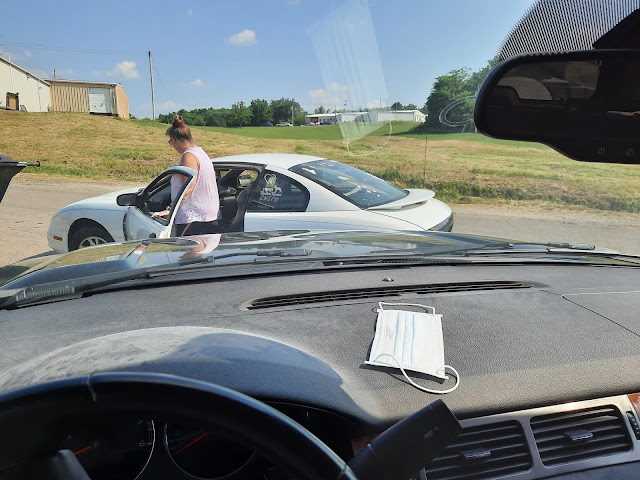 From this angle, it might look like she's not all that close. But if you were to zoom in, you'd see that it was like someone fired a small sedan across T-Hoe's bow! That's aggressive parking right there! The air hose was long enough that she could have parked on the other side of the street and still used it. It took several minutes for her to re-coil it and hang it up. I'm actually kind of shocked that she did that! Probably just wanted to hold me captive a bit longer. No, I did not blur out her head, or the I [HEART] MY BOSTON TERRIER on her window. She does not deserve anonymity. It's not like she's doing a job up on the roof.
Dang honey badgers!
Posted by Val at 1:08 PM