Hick the nice guy was giving John Jones the benefit of the doubt. John had left a message saying he'd sold his lake lot next to ours, but the buyer had mistakenly cut down trees on OUR lot. Uh huh. Hick went to take a look, just to be sure only a few trees had been harvested, by mistake. We had no problem with this scenario.
YOU CAN'T TRUST A NERVOUS GUY LEAVING A MESSAGE ABOUT YOUR LAND!
Hick went to the main office of Big Lake, to make sure of our Plat # and Lot #, which I gave him off our property tax receipt. Here's a cheat sheet for your reference. Of course I'm not giving the ACTUAL numbers.
Lot 525 New Owner
Lot 526 Thevictorians
Lot 527 New Owner (formerly owned by John Jones)
Lot 528 Busybody Neighbor who stopped the tree-cutting of New Owner on our lot
The lots are consecutive. As you look at the following photos, keep in mind that these lots run in reverse order as you face the property: 528, 527, 526, 525. New Owner nailed up a sign with his name on it, on OUR tree on OUR lot, with the Plat # and LOT 527.
Which it's not. 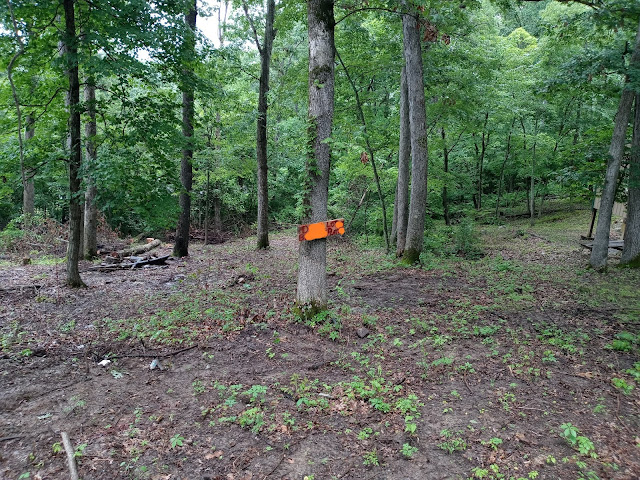 I doctored that photo in PAINT. It's not like somebody shot a paintball gun at it! I removed the name to protect the guilty, and obscured most of the Plat and Lot numbers. On the right margin of the picture, there's a little shed that has been built on Lot 525, which actually belongs to New Owner, according to personnel in the main office of Big Lake. In the background, you can see some of the trees he cut off OUR Lot 526. Hick says it looks like he's clearing a space to build a shed or cabin. 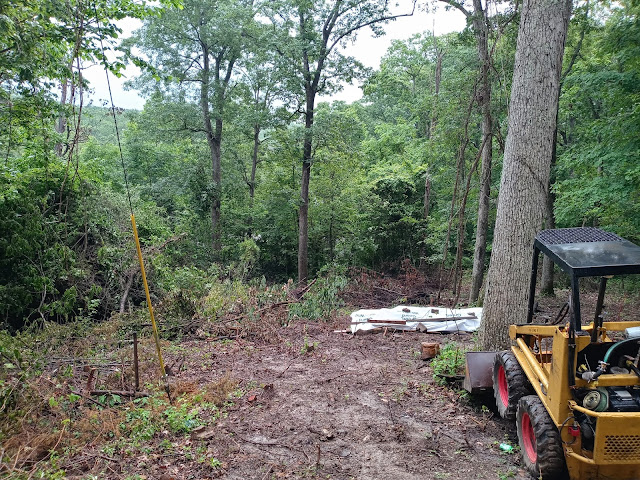 That's a tarp covering a pile of lumber. Not cut off our lot, Hick says. 2x4s and such. Boards. AND there's the Bobcat that New Owner was using to push down trees and clear the land. Still parked on OUR LOT. Here's a little more info on OUR LOT.
Hick says it's 70 feet by 130 feet. We bought it back in the '90s for $150, from the wife of The Original Buddy (of Hick and Buddy's Badly Blacktopped Hill), who had bought it as tax sale property. Hick said to sell it now, we might be able to get $2,500 out of it. Then he looked up the assessed value, which is $22,000. Prices are cheap around here. That doesn't mean we could get anywhere near that. The assessed value is used to calculate our tax on the property.
Anyhoo... while he was out there, Hick called John Jones, and said he just wanted New Owner to get his stuff off our lot. John Jones had more bargaining on his mind.
"Why don't you just trade your Lot 526 to me, for my Lot 527? Since you only want it for lake access and fishing."
"I don't want your Lot 527. I looked at it. There's a 20-inch culvert pipe running through the middle of your lot."
"The association is going to extend that pipe. It will be on your lot, too."
"Well, they haven't in the last 25 years, so we'll see."
I say John Jones knew exactly what he was doing. He showed New Owner OUR lot, sold it, probably already spent the money, and now he has to refund money to New Owner if he doesn't agree to take the actual Lot 527 that he bought, with a culvert pipe running through the middle of it. Or they might be in cahoots.
Thickening the plot, New Owner owns Lot 525 on the right side of ours. NO WAY could he think he was buying Lot 527 next door to his!  The numbering is consecutive, not odds and evens. Hick said it's possible that New Owner just recently bought 525, and didn't know that. I don't think so.
HE'S SCAMMING!
That's my accusation, and I'm stickin' to it. Hick says that technically, he could call someone to haul away that Bobcat, saying, "I found it abandoned on my property." Hick says he just wants New Owner to get his Bobcat and his wood off our property. I say "THAT'S OUR WOOD!" But Hick says it's not what he cut down. I pointed out that it's abandoned on our property. He said it's probably worth about $600 today. And that the Bobcat is a beat-up piece of crap, but would probably bring $500.
Heh, heh! There might be some profit in being a tax-sale land baron.
ALTERNATE TITLE: Squatters Gonna Squat, Scammers Gonna Scam
Posted by Val at 1:02 PM