Signs, Signs, Everywhere Are Signs...Mockin' the Scenery, Provin' It's Mine

Hick made another visit to our lake lot. He wanted to see if New Owner had moved his stuff off OUR property. And also to add his own special touch. 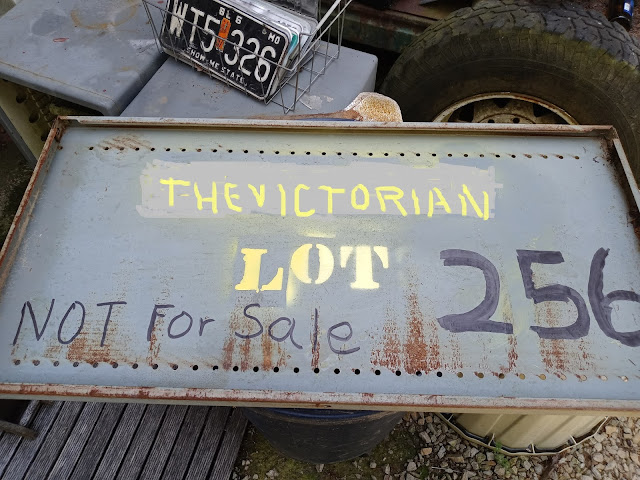 Granted, Hick used stencils and spray paint, and put our actual name on his sign. But I can PAINT, too. So a little bit of manipulation, and I've made my own special sign. [Dang it, I forgot to change the actual number!] You get the gist of it. Hick made his sign out of a metal shelf. He posed it alongside assorted other junk collectibles. That might be the leaning tire that Jack jumps on to rummage through Hick's trash for chew-toys.
Out at the lake lot, Hick discovered that the lumber under the tarp is still there. And he got a picture of a sizeable tree that was cut down. Looks like we're now the not-so-proud owners of a brush pile and a grove of stumps. And some trash. 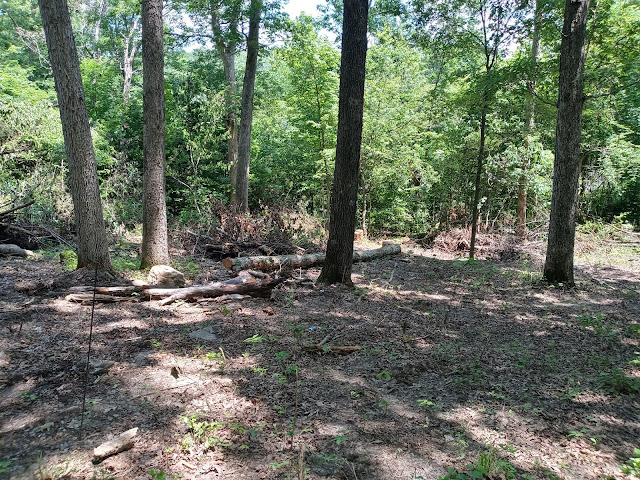 As with most of Hick's photos, you get the panoramic view. The felled tree and the stumps are in the background.
When Hick put up his sign, he tried to take down New Owner's sign. He couldn't get it off the tree. I guess it had a mighty long nail in it. Or perhaps a bolt. Don't think easygoing Hick suffers a squatter lightly. 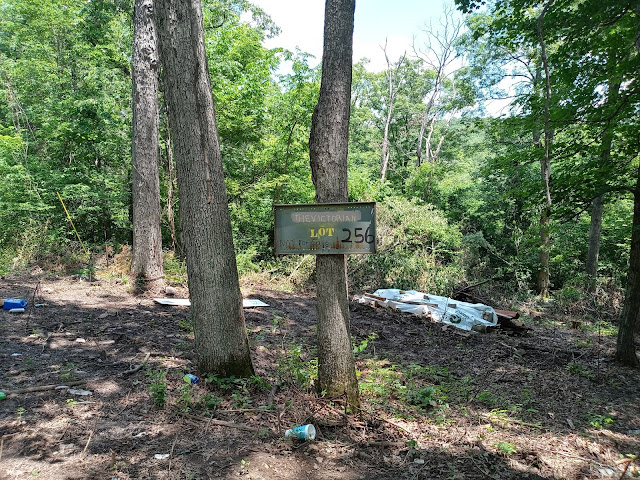 "I couldn't get his sign off the tree, but I spun it around so it's upside down."
Can anyone else foresee a feud developing?
I told Hick that John Jones was probably watching him the whole time, through the cracks of his mini blinds from his house across the road.
NOW, The Everchanging Story, as told by Hick, is that...
"John Jones TOLD me that he showed the guy our lot before he sold it. John said that HE (John) mistakenly thought it was Lot 526." [as referenced in the two previous installments]
"I don't know how he could MISTAKENLY do that! He knew right away that he had a culvert pipe on his own Lot 527, when you brought that up. So how could he think his lot was twice the size, and adjacent to Lot 525? He knew EXACTLY what he was doing! I hope New Owner demands his money back."
Hick said the Bobcat was gone. He didn't see it anywhere, but now he thinks it might actually belong to John Jones. I don't even want to hear about his logic for that.
Meanwhile, I'm giving it about a month until Hick's sign disappears. John Jones might need to sell some scrap metal to start paying New Owner back, for selling a lot that didn't belong to him.
Posted by Val at 1:05 PM