What swag can a high school senior get if he goes begging at each classroom door on the next-to-last day of school? This: 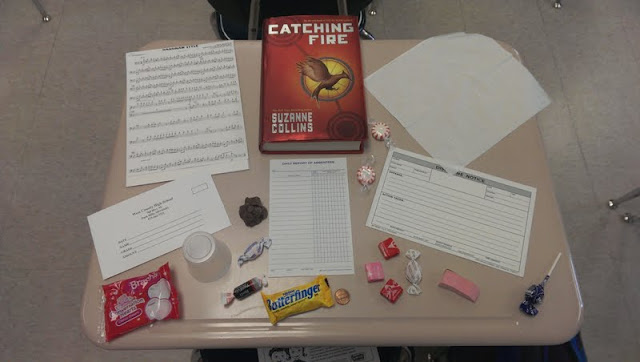 Don't go thinking that I encourage my son to be a little beggar. One of his teachers took her class on a trick-or-treat expedition. They were supervised at all times. With faculty readying their rooms for the summer, sometimes good deals can be had for a song. Better yet, for NOT singing.

Here is a list of items in this picture, starting at the bottom left corner:

Genius was most impressed with Catching Fire. He said the librarian was giving out books. No way. I said that would never happen. "No, Mom! She had a whole box of books to give away, and I picked this one!"

"It looks surprisingly like the one from our house, the one I pre-ordered when it first came out, before there was such a big to-do about The Hunger Games series. The one you loaned to several people, and we never got back."

"Yeah. The main reason I wanted it was because I can't find the one at home."

After preserving this moment for posterity, Genius raked in even more loot. I think I heard him mention a paper clip. I'm trying to conceal my envy.

Tom Sawyer never had it so good.