Hick was in the doghouse yesterday. There was plenty of room, because he lost my sweet dog Juno! I know! I hear your wails joining my own. Sweet, sweet, two-year-old Juno, my canine soulmate, rescued from starvation at the hands of my mother, who saw no reason to feed a tiny puppy dumped in her rural yard. Hazel-eyed, grinning, feathery-tailed Juno. Always there to greet me, morning and night, winter, spring, summer, fall. 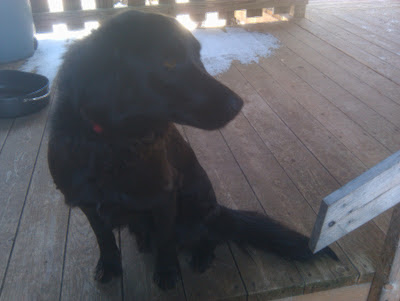 At first I was not aware of the seriousness of the situation. Genius and Hick had a little spat over replacing a pipe on the road down to the creek. Genius simply stated that Hick was mad about the way Genius wanted to do it, and also mad because he lost Juno. Silly me. I pictured them on our dirt road, digging out a pipe to put in a bigger pipe, while Juno frolicked down the creek and into the woods. She lives here. In the woods. No big deal. She'd be back when she was ready. That was at 11:00 a.m.

Hick made himself scarce most of the afternoon. He came in to make a sandwich around 12:30. Didn't say much. Was kind of surly. I chalked it up to his disagreement with Genius. He was supposed to commandeer The Pony for pool work later in the afternoon. The Pony heard nothing. Didn't know where Hick was. Didn't care. Because he got out of pool work. At 5:30, Hick came in looking for supper. He had a confession.

"You mean she STILL isn't back? Is she locked in the BARn? Caught in the goat pen?"

"No. That's the first place I checked. She never came back from this morning. I asked Carrots if he'd seen her, and he said no. That when we went up the road this morning, he saw three dogs go over the crest of the hill behind us."

"Wait a minute! Carrots? He lives way down on the blacktop road. You didn't take my Juno down to THAT creek?"

"Yeah. We went down there to get sand. I even went back and asked the people fishing on the bridge if they'd seen a little black dog. They said no. I've been up and down that road four times, knocking on doors, asking people. Nobody has seen her."

"There were only two cars that came over the hill. I've been looking. There's no sign that she got run over. I don't think she was wearing a collar."

"She had one on, and it was too tight. I thought I told you to loosen it."

"If it was too tight, she didn't get it stuck on a limb."

"What if somebody in a car stopped and picked her up? She's the best dog EVER!"

"I know you love that dog. I'll go back and look some more."

"You can wait until after supper. I don't want her to be in the woods and not able to get home. She won't understand why we left her."

After supper, Hick hollered for The Pony to go with him. "You can call her and listen for her. I'll go get the Gator." They were gone for a half hour. I was losing hope. I called my mom, because I knew she would feel my pain.

"And now it's been seven hours, and Juno still isn't home! She wouldn't stay away that long unless something was wrong."

"Oh, honey. That dog loves you. He'll come home when he's ready." Spoken like a woman who, after two years, still does not know the sex of that puppy she gave me after starving it for two days.

I heard the Gator. "I've got to go. They're back." The Pony skipped up the porch steps and flung open the door.

"Where did you find her?"

"We were at that house at the top of the hill. On the blacktop road by the mailboxes. Dad knocked, and the guy said he hadn't seen a black dog. He said his dog usually goes wild barking if there's another dog around. Just then, I thought I saw Juno's tail across the road in the woods. Their dog took off running, barking at the woods. Dad and I drove down to the end of their driveway and looked across the road. I called and called to Juno. That dog started back to the guy's house, and Juno ran to us in the Gator!"

"Was she happy to see you?"

"I guess you could say that. She started crazy barking like I've never heard her before. I think she was afraid of that other dog. She jumped in the Gator with us. She was exhausted and panting. We petted her and started home."

"You brought her home in the Gator?"

"Well, kind of. When we turned onto our gravel road, she got out. Actually, she JUMPED out. And followed us home. She's on the porch now."

"Make her come around back to the shady part." I went out the kitchen door. A lovefest ensued. The other dogs gathered around sniffing and whining. Good-for-nothings! They could have gone on those other trips and sniffed her out. When I went back in, I told Hick, "I don't want her to run off!"

"She ain't runnin' nowhere. She's wore out. I guess she was hiding in the woods, afraid to cross the road and come home because of that other dog. She sure was happy to see us."

That's why you don't take my precious dog two miles down the blacktop road! Even Genius was mad this morning. "I tried to tell him to take his truck, because I knew the dogs would follow the Gator. But no. He wouldn't listen to me." I think Hick learned his lesson. I'm sure he would rather have spent his Saturday flea-marketing, Goodwilling, auction-attending, fence-building, pool-freshening, or farm-hopping. But instead, he searched tirelessly for my Juno. And found her! I'm willing to give him a free pass on his next transgression. Not a free pass from the blog, of course. But from my real-life wrath.

I think Juno probably lagged behind sniffing at some critter, then looked up and her pack was gone. She fiddled around, laid down, and then heard or smelled that other dog. Maybe she had a flashback to her tender puppy days when she was abandoned. When Hick drove by each time in the Gator, I'm sure she recognized the sound, and probably ran along through the woods after him. That could explain her exhaustion.

Or maybe she just chased a rabbit for seven hours and was ready to come home.

Good thing I didn't know earlier the true nature of Juno's disappearance. I spent the day thinking she was down by the creek, several hundred yards away. Not out on the county road.

Sometimes, what I don't know doesn't hurt me as much.