Has The Pony's Luck Run Out?

The Pony sent me a picture on Saturday afternoon, the day he returned to work after two days off, and his big jackpot at the casino.
"I'd get a lottery ticket if my plans weren't to go home, take a very cold shower, and crash because of this heat."
"Oh my gosh! That's retroactive casino luck! Want me to get you a ticket when I go to town?"
"Yeah. Are those $10 tickets with the 7 still a thing? One of those would probably be the best bet."
"Yes. With the flames? I'll get you a $10 sevens ticket. Symbolic for the flaming heat?"
"And, yknow, 7s."
DUH. Sometimes Val can be so dense! FYI, many casinos list their address as '777' something boulevard. Lucky sevens. Like the lyric in the Alabama song Dixieland Delight: "Lucky as a seven..."
This picture was from a Metris van, not an LLV (Long Life Vehicle). The Pony said they got in a bunch of the Metris vans recently. Hopefully to replace some LLVs! Anyhoo... that was 777 actual miles on it when he took that picture around 3:00 on Saturday. Here's a YouTube video of the USPS Metris from 2020, if you're interested in a tour inside and out. It's 6 minutes long.
Anyhoo... I got that ticket for The Pony. He just scratched it when he came out yesterday. LOSER! Oh, and he showed me another picture from a work vehicle: 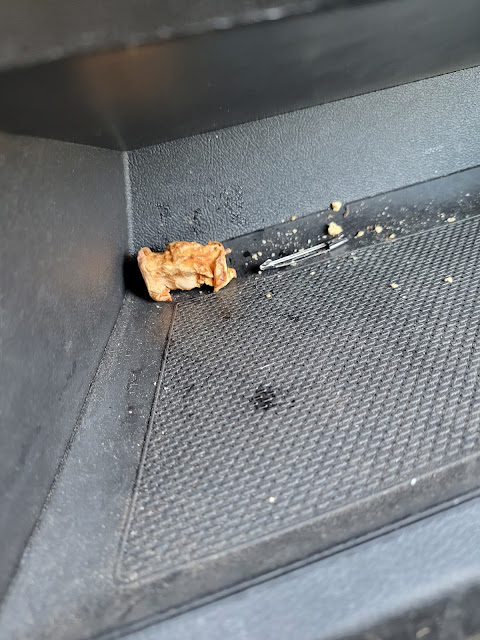 "That's what the previous driver left for me! An apple core! It's so desiccated that it has almost disappeared. I'm not touching that thing!"
"Is that on the floor?"
"NO! It's in the little cubby thing on the dash!"
Again, this was in a Metris, not an LLV (Long Life Vehicle). Heh, heh. That apple core would probably be the nicest and newest thing found inside an LLV. Almost like a decoration.
Poor Pony. He's not lucky as a seven anymore.
Posted by Val at 8:00 AM