Hick bought himself some new wheels on his trip out west to see his brother. Didn't even consult ME! Just like that time Hick left in a huff, and I saw him three days later riding a new lawnmower around the grounds. Only this time, he kind of returned in a huff, and it only took two days before I found out about his new ride. 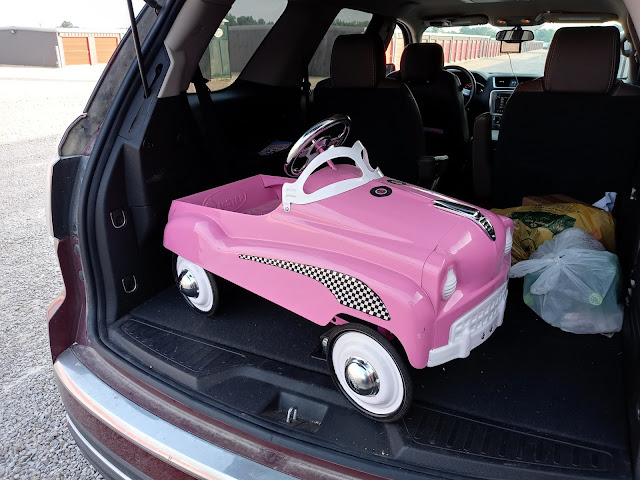 Ain't she sweet? Can you see her toolin' down the street? I think this purchase might actually be a bargain. According to the message Hick sent me with the photo:
"Peddle car I bought for $49."
Yes. I know. PEDDLE car. Though in this case, that little pedal vehicle IS LITERALLY A PEDDLE CAR! Here it is in the back of A-Cad, up at Hick's Storage Unit Store where he unloaded it. He's going to ask $125, and says he'll take $75. Shh... don't tell anyone.
If you zoom in on the back, the brand is InStep. Looks like it was called the InStep Pink Lady Pedal Car. I never had one as a kid, but I had a FIRE ENGINE. Although I don't think it was an InStep. Maybe a Murray. More boxy, with ladders on the back.
This Pink Lady would not have been conducive to good sibling relations. With the fire engine, my sister the little future ex-ex-mayor's wife could drive, and I could stand on the back, holding onto the ladder racks. No, I did NOT tip it over!. We'd ride it down the sidewalk hill in front of our house, and it would get going so fast that Sis had to take her feet off the pedals. At the bottom, we had to make a quick left, and turn it over in our neighbor's yard, to prevent flying off the sidewalk side into a creek. Rough sidewalks in our town! No rails as the sidewalk crossed over the creek that flowed under the street.
Some kid will be very happy to have that Pink Lady. Even if it's an adult over-grown kid buying it for nostalgic purposes, and not actual driving.
Posted by Val at 1:01 PM