Hick FLOORS Us With His Usage of the Word "Done"

You're welcome. I interrogate Hick so YOU don't have to!
Tuesday night, I asked why he sent me pictures of his Railroad Car shed that showed the floor, but not the good stuff. I get it that Hick was proud of his handiwork laying the used laminate. One picture of that would suffice. I think I speak for most of you when I say that the INTERESTING stuff in the Railroad Car shed are the collectible contents. Not the FLOOR!
Turns out Hick DID take other pictures. He just didn't bother to share them with me. 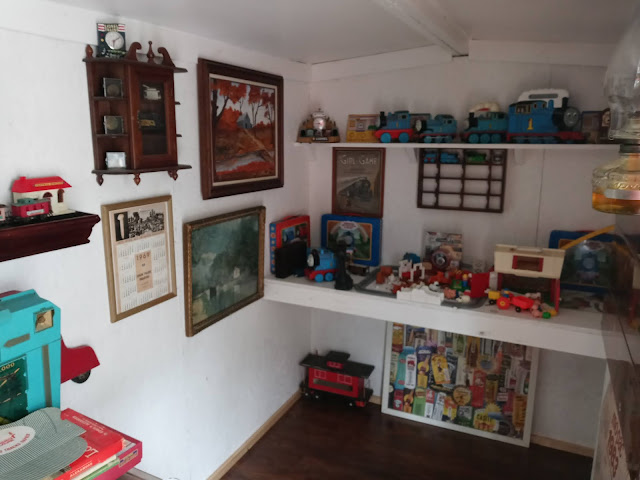 According to the time stamps on Hick's photos, he hung the pictures about 90 minutes after he was DONE with his Railroad Car shed. 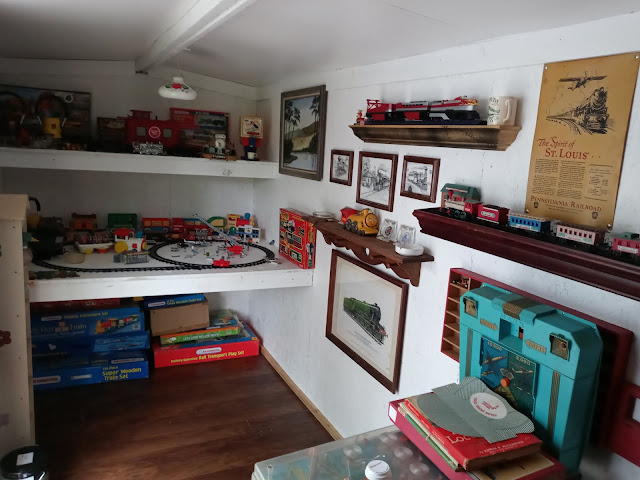 Not such good lighting, but you can see the little train track set up on the shelf. There's my pinball game. Shh... don't tell my sister the ex ex mayor's wife. The set of 3 black-and-white train drawings used to be on the wall of Genius's room. He really liked his Thomas the Tank Engine when he was a young 'un, and anything trainish.
So now you've seen the REALLY DONE project of Hick's Railroad Car shed over on Shackytown Boulevard.
Posted by Val at 1:06 PM