Somebody Needs a Good Clubbing

We had lunch at our new favorite casino on Monday.

Hick had his regular cheeseburger and fries. His slice of pie this time was normal size. There was more of a selection, and he chose apple.

The Pony switched off the burger, and had chicken strips. They were gargantuan, compared to the meager allotment I tried to give him from Dairy Queen a while back. In fact, The Pony could only eat two of the three chicken strips, and gave one to Hick.

So Hick and The Pony had no complaints. As you probably expected, Val DID!

I wish I had taken a picture of our meals. I guess we were in such a feeding frenzy that I forgot. But for comparison, take a look at the Chicken Club Sandwich I had the last time. 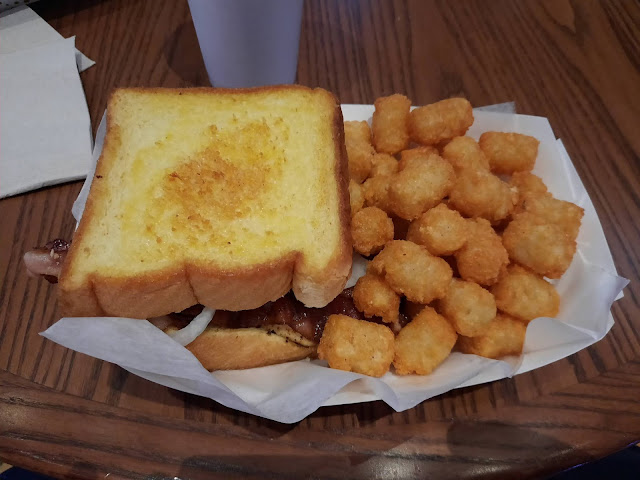 Yes, I should have showed you the inside. It was grilled chicken with tomato, onion, and bacon. I asked for no lettuce. The server brought us a basket of condiments with a tube of mayo that I added.

Anyhoo... THIS TIME, my Chicken Club came with a bone of contention.

Who does that? A Chicken Club is not a burger! Why was it on a BUN? That's something you might get served in CRAZYTOWN! A Chicken Club should be on toast. Or at least on bread. NOT a BUN!

The grilled chicken itself was cooked right, and of sufficient size. The tomato, onion, and bacon were proportional. But there was some kind of SAUCE on it! Yes, I added a tube of mayo. But the liquid that poured out of my Chicken Club was not mayo! Nor was it juice from the tomato, as suggested by The Pony.

My Chicken Club emitted a yellowish liquid with dark spots. It had a slight mustard taste. I had to lean over the serving basket like eating from a trough! So it wouldn't drip on my shirt, which was not my usual casino uniform of pink plaid, but a white shirt with a pink and tan checked pattern. That liquid pooled at the bottom of my cardboard serving basket. In fact, it ruined 4 tater tots!

There was no sauce listed on the description of the Chicken Club hanging on the wall behind the counter. As far as I know, a Chicken Club does not come with sauce. Mayo, maybe. But not something yellowish and mustardish, with black spots.

I know that little casino grill was having trouble with the help last time. The same lady was taking orders and cooking and bringing out the food. Whoever is cooking now needs a thorough lesson in the construction of a proper Chicken Club.
Posted by Val at 1:02 PM