Remember that old concrete shed at Hick House, that Hick said used to be a garage for a smaller kind of car back in the day when Hick House was built? 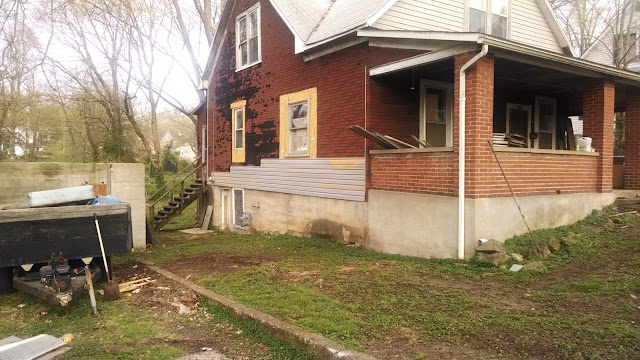 You can see part of it here, behind the trailer that Hick and HOS (Hick's Oldest Son) were using to load up with trash during early renovations. It was basically three concrete walls, with a bunch of junk inside. Hick thought it would make a good shed, for storing a lawnmower, with shelves to keep tools or stuff there wasn't room for in the basement.

Hick had some metal thingies to span the top, with plans for a slightly slanted roof. Nothing fancy. He thought he had enough metal roofing left over from his Freight Container Garage, but he didn't, so he bought metal roofing. Hick put his blue tractor on a trailer and took it to town for something to do with Hick House. While it was there, he scooped out all the junk inside the shed walls. That trailer was gone by then. HOS put up the spanny thingies, and a week later, after all the rain stopped, he and Hick put on the metal roof. I asked Hick to send me a picture of the shed with the roof on it. Here's what I got: 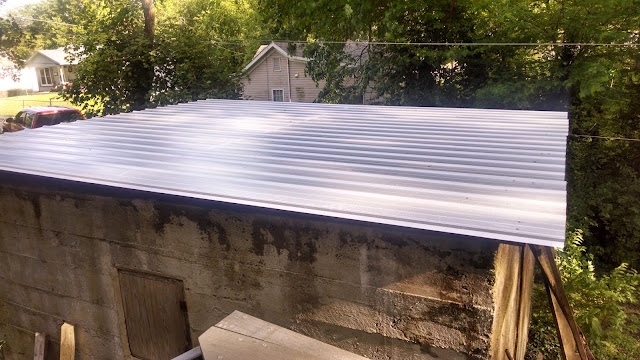 Hick's caption for that photo was: garage roof standing on the porch. Heh, heh. I'm sure Hick also knows a man who shot a tiger in his pajamas. His word order is not always what I, myself, might choose.

As you might imagine, I gave Hick a piece of my mind for this photo. Oh, come on! You know Hick can always use more gray matter. I told him I didn't just want the ROOF part of it. And also told him he's like a man describing an elephant. One day, I might think an elephant was a long and thin and ropelike. Another day, another description, I might think it was a patch of rough skin. And another, I'd believe that an elephant was a large flexible hollow appendage. It was hard to convince Hick that what I really wanted was a description of the whole elephant. I think my story was lost on him. I'm almost surprised that he didn't drive to the zoo and send me a picture of an elephant.

Several days later, Hick got me another picture of the Hick House shed, with its roof: 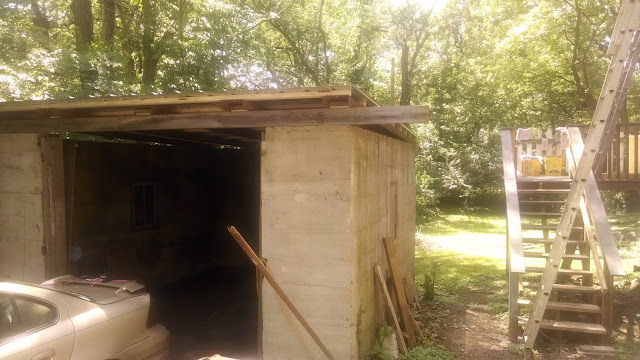 They will trim off that board, and cover the gaps between the top of the concrete and the roof with strips of metal trimmed from roofing material. Hick has two wooden doors that used to be on his BARn, before he got a garage door on it. HOS says one of his buddies has an actual garage door. Not sure which they're going to use. Probably the one easiest available when they're ready to put it on.

Here's a slightly different view, from the front. I guess Hick was afraid to only give me one choice of photo again. 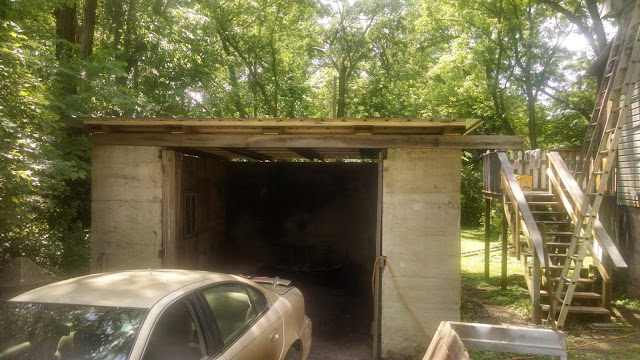 Now HOS has a usable space, where three useless walls once stood. That car will fit inside, but the nose hangs out. Hick says cars were smaller back then. This isn't intended to be a garage. Although when I drove by two Fridays ago, Hick's blue tractor was parked inside.
Posted by Val at 1:03 PM