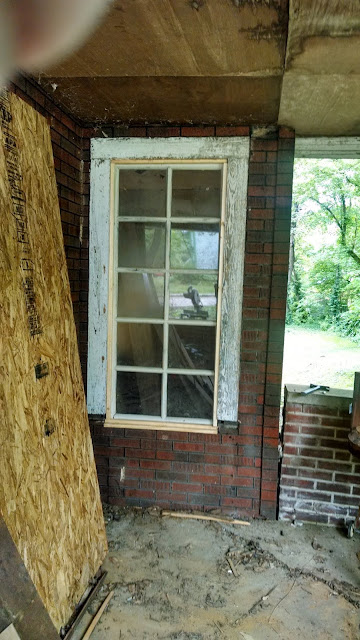 Seriously. He really didn't. Hick brought that pair of window-paned doors home, and leaned them against the garage, along with the old front door, and an interior door that he replaced. I saw them with my own eyes, before he stored them in the Freight Container Garage.

Yes, Hick sometimes knows what's good for him. He told me, before he put in this very-similar door-window, that he had found ANOTHER window-paned door over in the BARn. One he'd forgotten about, which was just a single door. So he figured it wouldn't hurt to cut it up and turn it into a window. Hick was really in love with that unopenable door-window idea. 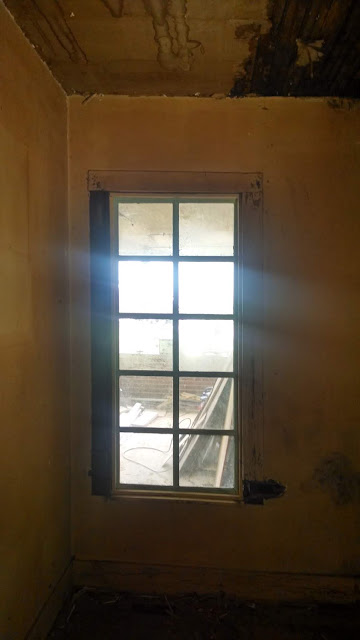 Here it is from inside. Hick's other option was to build in a window air conditioner, and close up the rest of the opening. He said if it was HIS bedroom, he'd much rather have a window to look out on the porch and front yard. So now there's a window.

Hick also said there had been a fire in Hick House, and that's what the mess is in the ceiling. He didn't know if it was wiring, or what, but that the water damage came from fighting the fire. And that there was also smoke damage on the paint/wallpaper, which is why the walls had been all yellowed. No worries about an electrical fire in the future, since Hick replaced all the wiring.

HOS (Hick's Oldest Son) scraped the ceiling of the master bedroom this week. Hick and HOS bought drywall for the ceiling, which HOS is putting up, with assistance from a buddy. Hick doesn't want to be on a ladder trying to hold drywall with his PopArm. He took some drywall screws over for HOS last evening. HOS is kind of nocturnal, like me. He's also got a buddy coming to help finish the plumbing.

I don't know if Hick House will be ready on Hick's original timeline of June 1. He says we'll keep the electric in our name until July 1, but after that, HOS takes over the upkeep of Hick House. Once the inspector comes and approves habitability, they'll get the water turned on in HOS's name. They've already been catching rainwater in a bucket, and using it to flush the toilet. So that part of the plumbing is operational.

Not long now, until HOS has himself a house for life, loan-payment-and-rent-free!
Posted by Val at 1:01 PM