Val Funnels Too Much Information Your Way

Hick installed the two ceiling lights in Pony House. The ones he got at the rehab store for $5 and $10. I said I wanted a picture when he put them up, and he said, "I already put them up. Here's a picture." Not a close-up, of course... And he only showed the living room light. 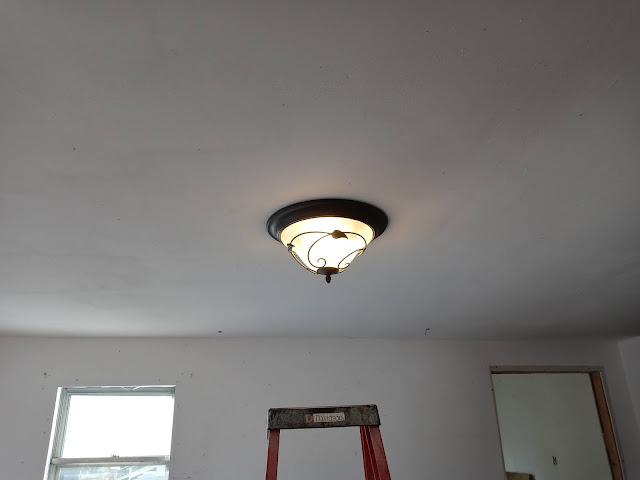 I believe that's the living room window that looks out on the side street, and the door to the Master Bedroom in the background. There's still a lot of trimming and painting to be done, but the living room was probably the most near-to-finished when we bought Pony House. 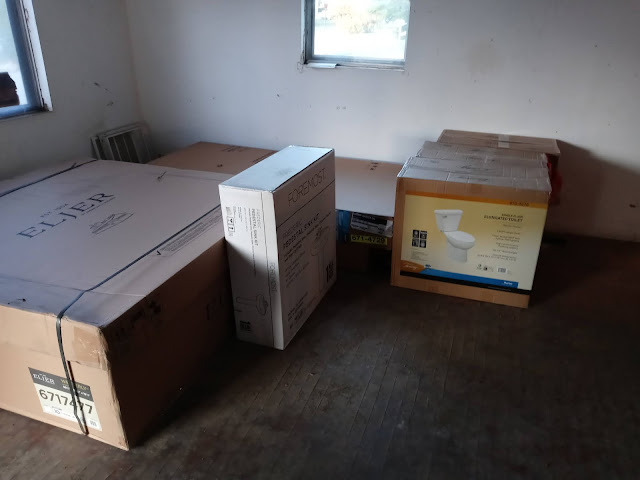 Also, Hick sent me a picture of the rest of the bathroom fixtures that got delivered. Namely, the three toilets. He got the tall toilets, because that's what The Pony asked for. The Pony calls them Old People Toilets. When Hick built our house, he put regular toilets in our master bathroom, and in the NASCAR bathroom in the basement. But for some only-Hick-known reason, he put a tall toilet in the boys' bathroom.
Let the record show that Genius was a month away from his 3rd birthday when we moved in, and The Fetus Pony was still three months from arrival. Why in the NOT-HEAVEN you would want a tall toilet in a bathroom for toddler boys is BEYOOOOOND me! But The Pony grew up with a tall toilet, his feet swinging in the air while doing his sit-down business, and he says the regular toilets are way too low.
Anyhoo... remember how I showed you Pony House Bathroom 2, where Hick had fixed the floor joists? And I didn't know what that jug was on the left side of the picture? Now I know! But you may not want to!!! Don't read past the picture if you have a delicate constitution... 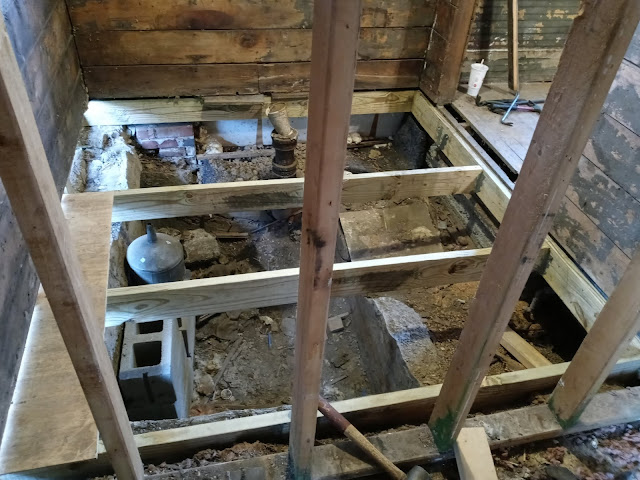 That is no jug. That is HICK'S PEE FUNNEL!!! 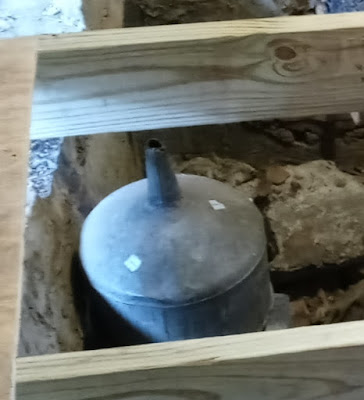 The main problem Hick has with re-habbing a house is the lack of a bathroom. He doesn't want to stop and lock up to drive a mile to Casey's every two hours for his mouse-sized bladder. It's not like he's in the woods and can use nature as one big toilet, like the Jeff Goldblum character in The Big Chill.
Since the sewer pipe was already in Bathroom 2, Hick took matters into his own hands, so to speak, and brought a funnel. When not in use, the sewer pipe is capped off with what looks like a 44 oz cup! You know, to keep the sewer gas smell contained. When he needs to use the facilities, Hick flips over his funnel onto that pipe. Then he washes it down with water from the case of bottled water that he took over there to drink.
As The Pony said when HE looked at the picture: "Oh, that's Dad's funnel for peeing. It's not like a real funnel with slanted sides. It's a really weird old-timey funnel."
"Um. I think that's the kind of funnel used to drain oil out of a car!"
"Maybe. That wouldn't surprise me."
Anyhoo... one of the tall toilets will be going on that sewer pipe when Hick gets to work on the floor of Bathroom 2. Not sure what he will do with the funnel...
Posted by Val at 1:04 PM