I Believe the ConCENTSus Is: Hick Is Not as Lucky as Val

Saturday again, and I am finally able to report that I found a PENNY this week! YAY, me! Has my luck turned around? Quite possibly. I also won over $100 twice this week on scratchers. Hick, however, was not so lucky. Meh. More about him later. Let's get to Future Pennyillionaire business.

My lone penny didn't reveal itself to me until Tuesday, April 17. That was the tax deadline this year, you know. Is that IRONIC? That I found a single cent on tax day? My taxes were already filed, though, and my refund directly deposited. So I didn't have to pinch that penny. 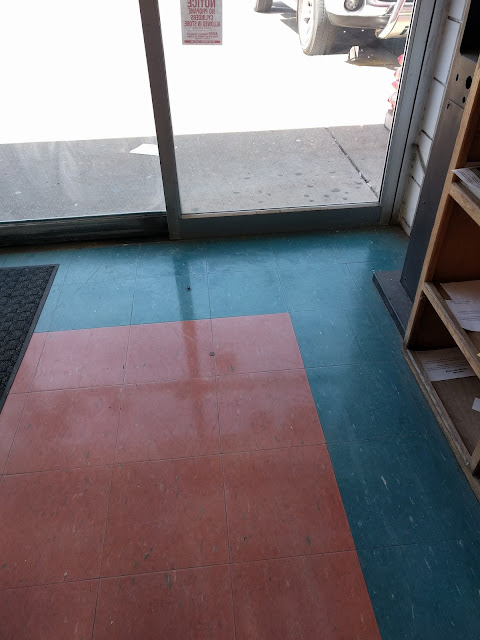 It was a 1960 model. I didn't see it until I was walking out the door at Country Mart. There it is, on the pink section of tile. That spot on the blue tile is a WASP, by cracky! Is THAT ironic? Is it showing the sting of tax day? I really need to get a handle on this irony thing. 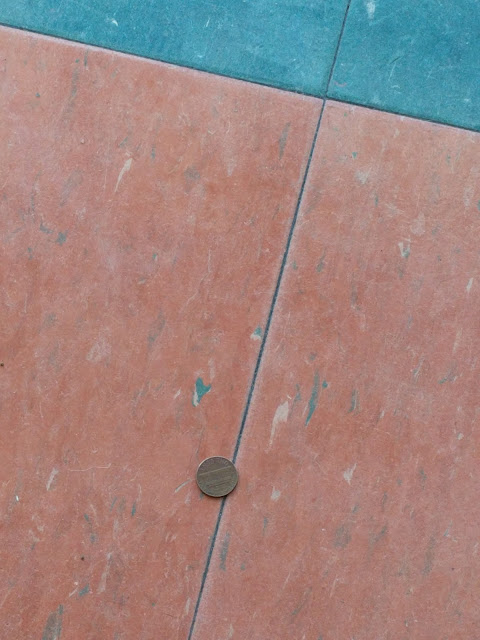 Face down again. Really. My odds are not even even about finding half of my rightful pennies face up. But I'm still pretty lucky, more than 50% of the time. Hick...not so much.

There's a Country Mart connection here. It's where I found my precious lucky penny on Tuesday. And the source of some bad news for Hick on Monday. Although he didn't know it until Tuesday, because I only saw it online in the local paper Monday night. There I was, scanning the front page, and I saw a picture of the County Health Center. "Oh," I thought. "That's where I just got Genius a copy of his birth certificate for his passport. I wonder if they've got some new service?"

As soon as that thought went through my head at the picture, I read the headline: Hepatitis A Warning Issued. "Ooh! That's some juicy news. I wonder where it's at?" Imagine my surprise when I saw:

The Missouri Department of Health and Senior Services (DHSS) is investigating a case of Hepatitis A in a food handler who worked while potentially contagious at Country Mart deli.

Anybody who ate there between March 21 and April 4 might have been infected with Hepatitis A! Well. I KNOW that Hick ate there between those dates. I don't know how many times, but he was going for biscuits and gravy there pretty regularly. AND he saw Neighbor Tommy there a lot.

I copied and pasted and printed the story, and left it on the bathroom counter for Hick when I went to bed Monday night. Hick had a doctor's appointment Tuesday (routine), and mentioned it to his doctor nurse practitioner. She said not to worry about it unless he started showing symptoms. Which, according to the article, could take 3-4 weeks. The article also said that most people who get Hepatitis A fully recover from it. The exceptions being the very young, the very old, or those with compromised immune systems. Huh. Hick is 2-for-3 on those.

Anyhoo...it's not the worst luck that could happen. But it doesn't hold a candle to finding a penny on the ground, or winning at scratchers! Yeah, the possibility that you might have eaten something that could give you Hepatitis A isn't all THAT bad. Until you realize that it's spread by eating food that was contaminated with feces from somebody's hand. That didn't originally come from their HAND, you know.

After I touched the buttons on Country Mart's scratcher machine on Tuesday, I slathered on the Germ-X once I got back in T-Hoe. I've seen plenty of their employees buying scratchers.