The One Where The Pony Picks Up Two Chicks

Last evening, just before The Pony left with Hick on the way to the auction on the way to his walk-a-thon, I heard the front door open. I briefly toyed with the assumption that a burglar such as the Unmarked Meter-Reading Bandit had breached our airtight security perimeter, also known as The Broken Doorbell Unturned Deadbolt System. I could picture him and his red ponytail wreaking havoc upstairs with that Mayhem Allstate Insurance dude and the Maytag man who sits under the counter licking dishes. Then I heard it:

Footsteps pounded down the basement steps. The Pony rushed into my office, flipping on the light with his elbow. "Look! Look what Dad and I found when we collected eggs! They were just born. One of them was still wet on the head from pecking out of the egg. The mom won't accept them. She tried to peck them. She already had one chick yesterday. I guess she only wanted one kid."

He held a chick in each palm. One yellow, one black. They continued to CHEEP up a storm. Maybe that gets their lungs going. The yellow one pecked at The Pony's thumb.

"How are you going to take care of them? They'll freeze to death tonight. It's going to be in the 40s or 50s. They need to be up under the hen."

"I know. Dad's going to put them in his barbershop. He ran a light bulb in there to keep them warm, and we'll put them in a tub on some hay."

"Do they have food and water?"

"Uh huh. But the food is too big, so tomorrow morning Dad is getting some regular chick feed."

"Some of them drowned in the water dish one time. Will they fall in?"

"No. It's one of those little waterers, with a dish at the bottom that the water comes out in. Shallow."

"I hope it works. They'll die anyway without the hen."

The Pony was practically beaming. I'm surprised he didn't hand out cigars. He really enjoys the critters.

This morning, Hick texted The Pony that he checked on the chicks, and "They were pretty rough."

"I don't know what he meant, but he didn't say they were dead."

The Pony and I went off to do the shopping, and Hick's oldest son came out with his kids to ride four-wheelers and see the chicks. According to Hick, the chicks were still and cold. Sonny picked them up and blew on them and held them in his hands, and they opened their eyes and started CHEEPing. So the men did what all men would do, and put those two chicks in a tub in the sun to warm up, and went off riding ATVs. When they came back, the chicks were deceased.

"Well, they probably got overheated in that tub in the sun. It was 84 degrees! They couldn't even get a breeze down in there. They can't regulate their heat. You gave them heat stroke."

"Poor things. They didn't stand a chance. Have you told The Pony yet?"

"Yeah. We thawed them out, then we cooked them. We tried." 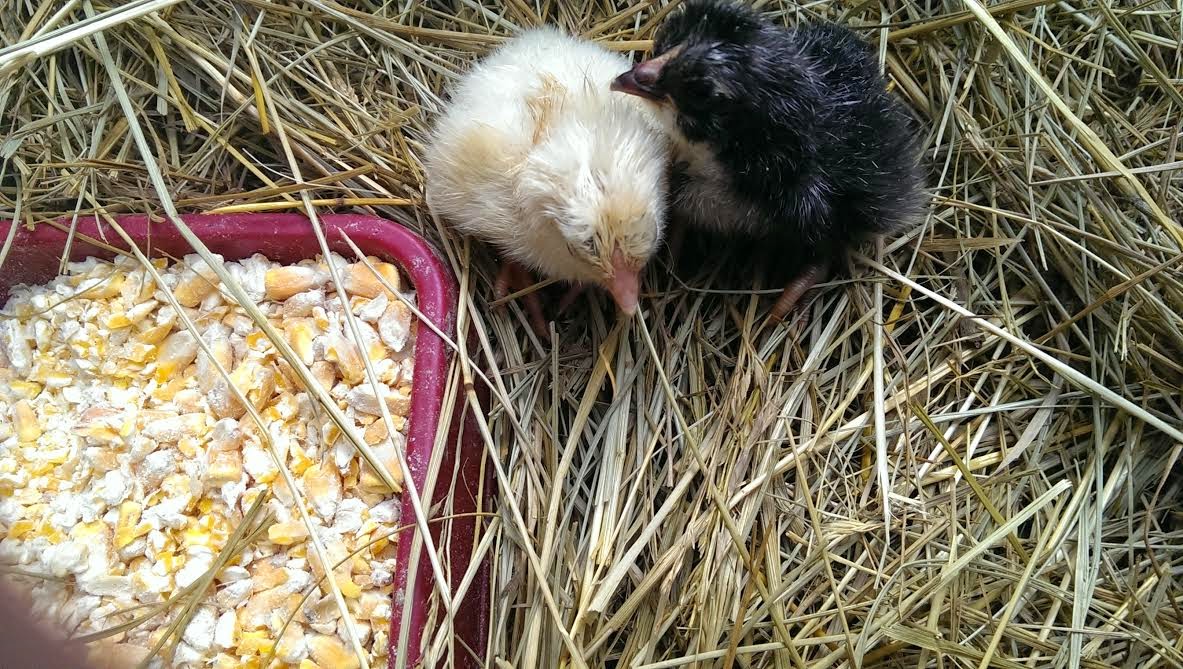 RIP, little Ivory and Ebony. We didn't even have time to name you. Sorry that the food you had overnight was bigger than your beak, and that hay and a lightbulb don't hold in your body heat like the wings of a hen. We did the best we knew how. Maybe your chicken mom knew something was amiss.

Mother Nature is a harsh taskmistress.