In perhaps the best-kept secret in Backroads since England was revealed to be an island...Val Thevictorian hurt her neck last Saturday.

Val was hurtin' for certain up through Wednesday, when the pain switched from her neck to her right knee during a getting-out-of-the-shower incident. Warning: Do Not Try To Picture This Incident. Val's best ol' ex-teaching buddy Mabel, unaware of the shower switch, texted Val about her level of incapacitation, revealing that she had said some prayers for Val and her neck. Upon learning of the improved neck health and the shower injury, Mabel offered pertinent advice: "Stop showering." I am concerned that Mabel may never have been required to read "The Monkey's Paw," and might need to be a bit more specific when she sends out prayers for my ailing body parts.

My mom was all in a tizzy this week because she worries about her Five-Dollar Daughter. She offered many suggestions, involving medicines or muscle-warming aids that contain substances that will interact with Val's blood-thinner. After being reminded that the goal here was for me to stop my neck from hurting without exsanguinating, Mom buckled down to work on the case.

"I sat by your sister in church yesterday. Her neck is sore, too. She was really having a time. There's this man that sits by us that we don't really like. Your sister couldn't turn and shake hands with him when we're supposed to greet each other. She's afraid he'll think she did it on purpose because we don't really like him. But she couldn't turn, because of her neck."

"Ask her if it still hurts. Maybe there's something going around like a couple of years ago, and the old school nurse who goes to your church told you that it was a virus that settles in the neck."

"Oh, I remember that! It took me about six months to get over it. You probably didn't want to hear that."

"No. But see if Sis's neck got any better. Maybe there's hope for me. My best ol' ex-teaching buddy Mabel says Walmart has a heating pack you can put on your neck and it works for 12 hours. She's used them on her back before. You peel off some foil, and it starts heating. If you go to Walmart, see if you can find one. She says there's no medicine. It's like a cold pack, only heat."

"You know, I think I have something here for a sore neck. I've had it a long time. You can used it like a cold pack or a heating pack. I'll have to look for it."

Later that evening, Mom called to say that Sis said she got rid of her sore neck by spraying on some kind of heat from a can that she got in Walmart. "She says it works all day."

"That doesn't sound like something I could use. I'm sure there's aspirin or some form of painkiller in there, just like in BenGay or Thermagesic. I don't think I should try it."

Mom sprang into action to heal her Five-Dollar Daughter. She goes to Walmart almost every day, anyway. So the next morning she gave me the scoop.

"I looked in Walmart for one of those heating things to put on your neck. I didn't see any, but I know I have one here. I'm going to look for it, and I will give it to you to help your neck. I don't use it anyway."

According to Mom, this was some kind of heat pack that does not give off any chemical medicine. You could wrap it around you neck to relieve the soreness. So I told her okay. Anything to make Mom feel like she was helping. Couldn't hurt.

The next morning, Mom had found her heat pack. "I'm going to run it over after school. You can take it home with you. You just put it in the microwave for two minutes, then it holds the heat and you can keep it on your neck. I don't know if you could use it at school. It doesn't smell. It's not all that big. I know you have a microwave in your room."

"Okay, thanks. Bring it by this afternoon and I'll look at it."

"It has the instructions with it. I don't know how long ago I got it. But the instructions are on a card in the package. You'll remember to take the card out before you put it in the microwave, won't you?"

"Yes, Mom. I think I can remember that."

So...I was thinking Mom had some spectacular gadget from Walmart that would warm up my neck and relieve the soreness. Not a new one, but one that somebody had given her down the line. Maybe it would be our Label Baby Junior, and Mom could re-gift it to me. She showed up at school as promised. And this is what she brought me: 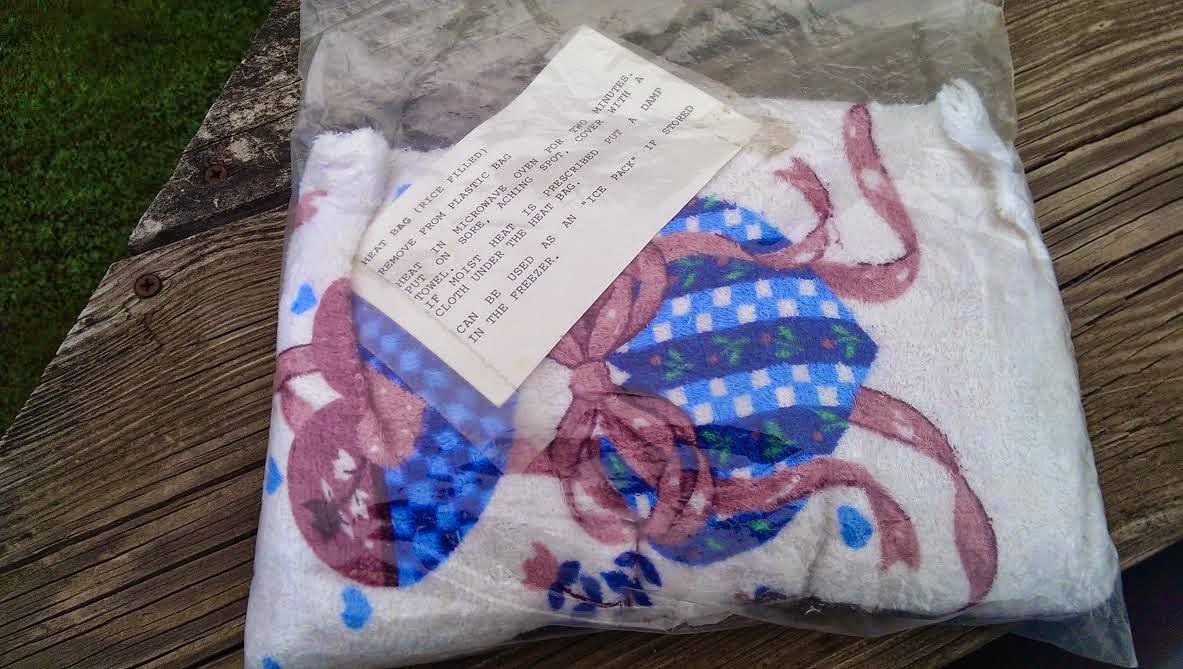 Not exactly what I was expecting. It was rice in a kitchen towel, enclosed in a freezer bag. Doesn't look store-boughten to me!

I have not yet given it a try. Mom means well. It's the thought that counts.

I'm surprised she didn't tell me to use Avon Skin So Soft.