A Reuben For the Rube

Hick's favorite place to have lunch is the Senior Center over in Sis-Town. It's on Main Street, just a few blocks from The Pony's house. So it's handy when he's working there. If The Pony happens to be having a day off, and Hick has the trailer hitched to SilverRedO for tractor or lawn mower purposes, The Pony generously lends his Rogue for Hick to drive to lunch. He stops short of accompanying Hick, though!
Hick says the price of a lunch is $3 if you're over 65, and $5 if you're not. He has bought lunch there for Old Buddy a couple times, at that outrageous price of $5, heh, heh.
Anyhoo... Hick was off in the middle-er of nowhere Monday, working on Back-Creek Neighbor Bev's house. Old Buddy called out sick, so Hick finished up earlier, not having help with some of the items that he can't do alone. He was thrilled to get to the Senior Center before they stopped serving lunch at 11:30.
I was home minding my own business and taking calls for Hick's business when I got a text at 12:46.
"I got a seniors meal for you I'm bringing home they had an extra on bringing it to you"
"Okay."
"It's a Reuben sandwich and salad"
"Mmm."
At 1:15, my meal arrived. It was tied up in a white plastic bag.
"Who tied this, MY MOM???" She had a habit of double-and-triple-knotting the loops of those plastic bags, like the items inside were going to jump out and run away.
"No. The gal at the Senior Center. Here." Hick whipped out a pocket knife and started slashing. Inside was a styrofoam container with sections, and a small square container on top of it. 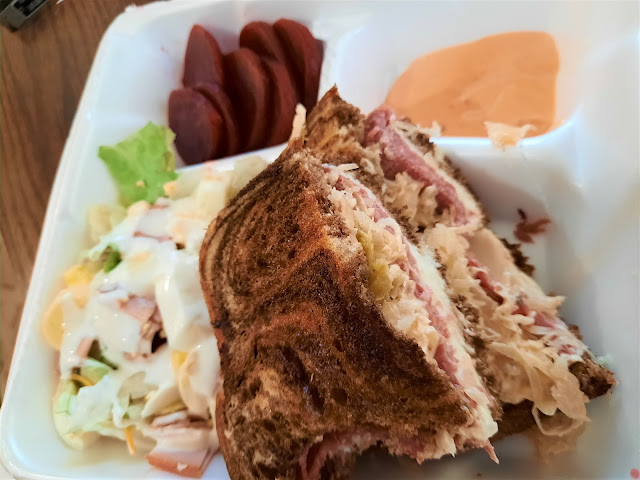 There's a Reuben sandwich (I cut it in half), a salad of iceberg lettuce, sliced ham, boiled egg, and the Blue Cheese dressing I added out of FRIG II. It came with a packet of Honey French dressing. I'm not one for a sweet salad dressing. In the back left section are sliced beets. And on the right, some Thousand Island dressing that I poured in, also from FRIG II, to use as a dipping sauce for my Reuben.
It was sweet of my Sweet Baboo to bring me lunch. I give it mixed reviews, though I would much rather have had it than not.
REUBEN: I'm not sure where the Senior Center got their recipe. They had the marble rye, which was great. I can't find it when I make my own at-home Reubens. The meat was not corned beef, but slices of beef like you might get in a Buddig lunch meat package. There was a generous portion. The cheese was white, not sure if it was Swiss or provolone. There were a few strands of sauerkraut, but I swear that most of the vegetable on that Reuben was shredded iceberg lettuce! I am not a fan of iceberg, and kept burping old iceberg after eating. I didn't notice any sauce on this sandwich, so I'm glad I had my Thousand Island.
SALAD: It was okay for an iceberg lettuce salad. The meat and egg were plentiful. No cheese, but it had shredded carrots. I don't like carrots in my salad. At the bottom I found a lump. I thought it might have been a piece of egg yolk covered with my Blue Cheese, but it was a crouton! A single crouton! Not crunchy, on the bottom of my salad.
BEETS: Don't know. Never gonna know. I don't eat beets. Not even a taste. No siree, Bob! Not for me.
DESSERT: That was the small square container. It was Peach Crisp, I think. I opened it up, and the sweet smell almost put me into a coma! Hick swore that it was delicious, so I closed it up for him to have later. He's way more sweet-toothed than I. 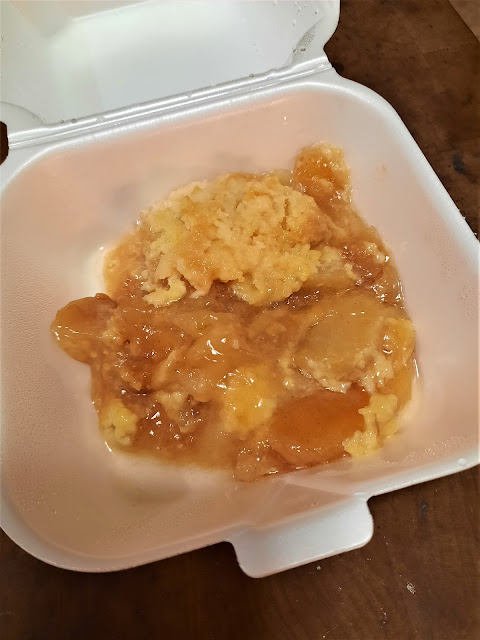 Looks good enough, though I have a feeling it wasn't very "crisp."
"How long was my food tied up in a plastic bag?"
"I don't know. I ate at 11:30. Then they were closing. They had 3 dinners left. People had ordered them for pickup, but never showed up."
"Did you pay for it?"
"No. They didn't want money. They gave one to me, and the other two to two other guys. So they didn't waste it. I didn't feel bad, though, because I didn't have three ones to pay for mine, so I put in a five. So they got extra."
"I'm just asking how long, because it was served at 11:30, and I didn't get it until 1:15. So I don't know where you were, and if it was sitting in the hot truck, all tied up in that plastic bag. I hope I don't get Senior Center's Revenge! My salad and sandwich were the same temperature!"
"I'm sure you'll be fine."
Notice Hick STILL did not say where my food had been all that time!
"I wish there'd been more kraut. I swear they put shredded lettuce on my sandwich! Maybe they ran out of kraut..."
"It probably WAS shredded lettuce. They had the shredded mixed with the regular lettuce for the salad, too."
Anyhoo... it was nice of Hick to bring it to me, and it was tasty enough. I didn't even stab a gum or break a tooth on that little bone I found in the sandwich...
Posted by Val at 8:00 AM