When the Boys Come Home, the Other-Worldly Does Roam

Genius and The Pony have been home for Christmas. The Pony had a longer stay, from the 18th thru the 30th. Genius departed shortly before noon on Christmas Day, heading to Friend's house, then off to a ski trip out west.

The Pony has been quite comfortable in his own bedroom, cluttered as it may be. Genius's room has been closed since he left. Genius had carried up the gifts he opened under the basement Christmas tree. The ones I hadn't mailed directly to his Pittsburgh apartment. Hick will be mailing them once Genius returns from his ski trip.

Saturday night, Hick was in bed. The Pony sat in the La-Z-Boy with his laptop, while I reclined in my OPC (Old People Chair) in the basement. At 10:45, I heard a tremendous THUMP from Genius's room. It was startling, but I knew The Pony was upstairs. A possible explanation for such a noise.

"Unless maybe it was the dogs on the front porch, knocking something over..."

"It didn't sound like something falling on wood, though."

"I know! It was a THUMP! Something heavy!"

"I'll look on the porch. Nope. Nothing is different out there."

"Keep talking to me while you do it."

"Okaayyy. First...nothing out of place in my room. I'm opening his door...Huh! Looks like those donut pans fell off the bed. It sure sounded like more than that. No clanging. But HEAVY. I don't know how he had them sitting..."

"Yeah. Funny how they sat there for 3 and a half days before falling. Nobody was moving. No vibrations."

I didn't go look at what The Pony saw on Saturday night. Are you kidding? That's just CRAZY! But Sunday, around noon, I opened up the door to get a peek. Surely you don't think The Pony moved anything on Saturday night! 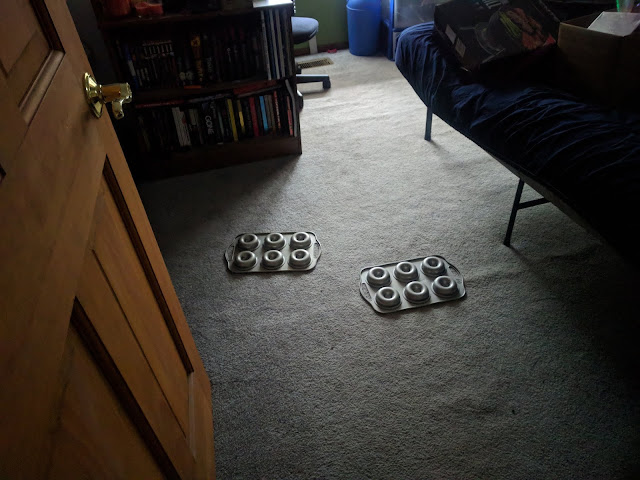 Let the record show that Genius made donuts when he lived with five housemates in college, and fancied himself to be the next Krispy Kreme. He enjoys cooking, so I thought he might like a donut pan. Actually, I had gotten a donut pan for The Pony, with an easy recipe using only cake mix and applesauce. I wanted ONE MORE, but Hick bought two, ignoring my list. Then I figured I'd give it to Genius. But nobody wants to go to the trouble of making only 6 donuts. So I got another pan.