On rainy and windy Thanksgiving day, Hick drove us to a casino we'd never visited before. It is called the Grand Casino, in Shawnee, on I-40. You can't miss it. The 10-story hotel is quite noticeable over the Oklahoma plains. Let the record show that this casino was, indeed, GRAND. To me, anyway.

I wandered around with The Pony, who doesn't really have favorite slots like Hick and I. So when a slot beckoned me, I fed it some money. 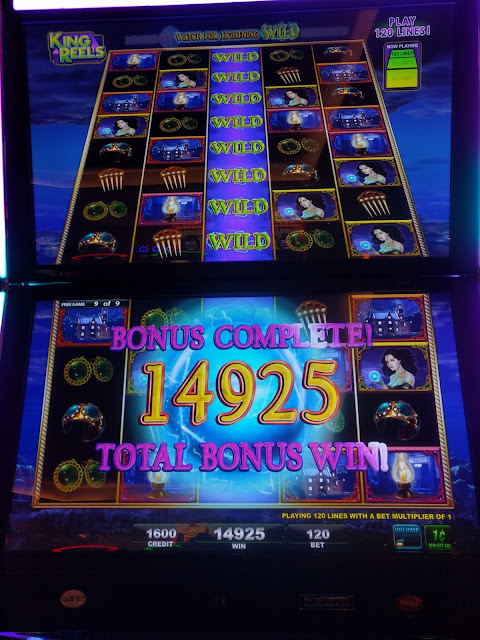 I think this one was called Dark and Stormy Nights. I have no idea how it worked. I fed it a twenty, and after a few spins, I hit a bonus, which kept giving me free games, and expanded to a second screen! This is the very end of the last spin, showing my total win of $149.25. As you might imagine, I was quite pleased with myself.

A couple rows over, I saw a Nugget machine that I've only played once. Not sure how it works, either. But it worked for me! 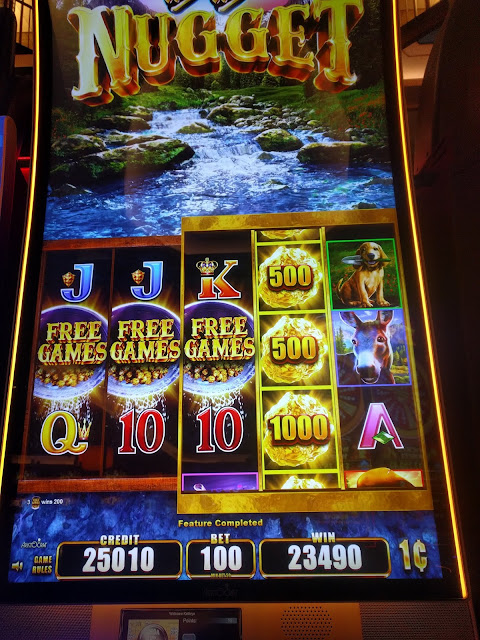 Again, I fed it a twenty. I played a while going up and down with little wins. The Pony came to play the same kind of machine on my left. Much to his dismay, I hit the FREE GAMES bonus. I don't remember how many I had, but by the time it was over, I'd won $234.90!

We had to leave the Grand Casino to get to our Thanksgiving feast. I'd only had time to play four slots, none of them my regulars, but I was okay with that! On our drive back, I pumped Hick for information about the location of a new favorite, Spartacus, and old game I'd played back home. Hick saw one at Riverwind Casino in Norman, where we always take The Pony. 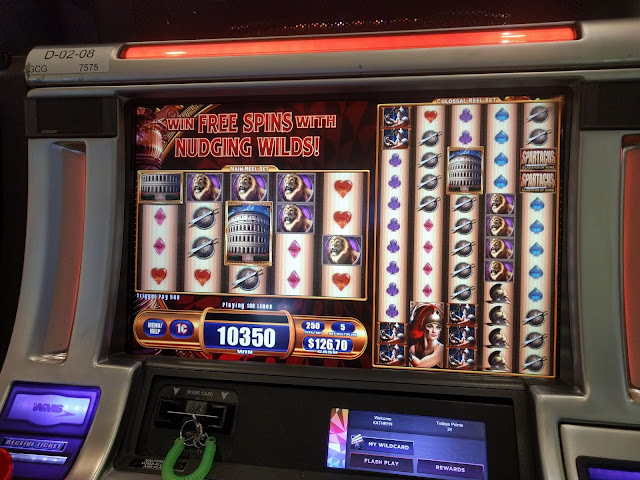 I lost The Pony on a trip to the bathroom. In looking for him, I noticed a machine through the aisles. I had no intention of playing it, but my eye kept returning. I figured I'd eventually reunite with The Pony, and sat down to play this Sphinx themed slot whose name I do not know. Of course a dude sat down right next to me, on my left, to play a different kind of slot, and commenced hitting bonuses like there was no tomorrow! Of course that irritated me, and I refused to look over at what he was winning. I figured I'd play out my twenty, and continue my Pony quest. 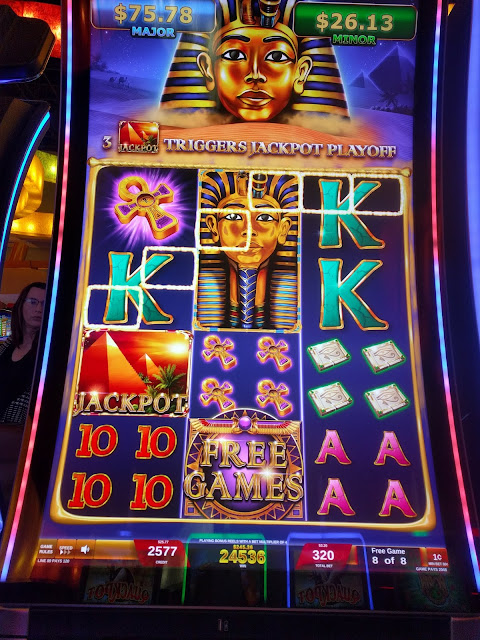 This Sphinx started paying me little wins. By the time I doubled my money, I started going across the wagers. I'd been playing 60 or 80 cents, I think. I don't remember how the bets went, but as (my very good) luck would have it, I hit FREE GAMES on a $3.20 bet. I'm not sure how this freaky screen paid me, but by the end of the bonus, it paid me $245.36. Something else I didn't know was that a creepy stalker was watching me from the other side of the aisle! There she is! Pictorial evidence in case I'd come to no good end on that evening! Unless...what if...she was BEHIND ME all that time, and it's a reflection in the side of my machine? No. Calm down, self. She's on the other side.

From here I met up with The Pony, who was ready to leave, what with having the beginnings of a cold, and losing his shirt on the slots. I'd already subsidized his depleted bankroll, and given him a couple of small winning tickets I'd cashed out. He'd squirreled away a third of the money I'd doled out to him at the beginning of our trip, so he wasn't leaving empty-handed. Can you believe HICK had the nerve to say, "What, you're giving HIM some of your winnings? How about me?" Yeah. I knew you could believe it. I offered Hick a twenty, but he was too proud to take it. Dummy! I regret even offering it, because Hick is a grown man with his own Storage Unit Store, where he rakes in dollars of profits every weekend!

Anyhoo...Hick left to drive The Pony home, with plans to come back and spend another hour before we left. Gosh. A lot of money can be eaten by slots in an hour! At least I had one more little win. 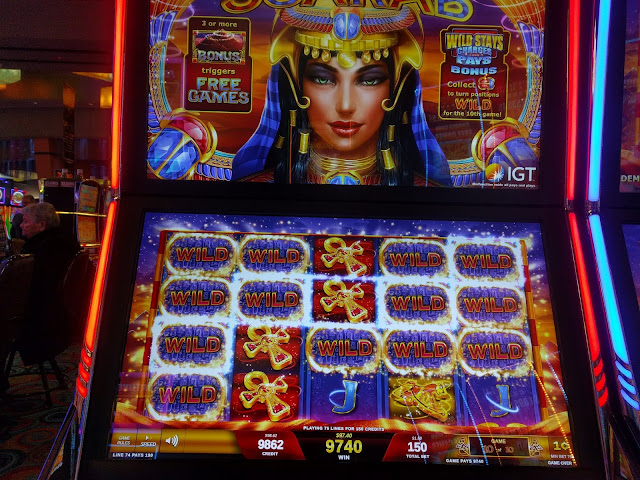 I haven't seen this Scarab slot anywhere but a casino we play at in Wyandotte, Oklahoma. But here it was, calling me over. It gave me a little back, when I had almost depleted my twenty. This evening was actually the worst of our three gambling sessions for me. I lost back a little of my profits, besides funding The Pony every now and then.

Still, I am calling this trip a success in the gambling department, because I came home with a profit of $400. Poor Hick. He lost more than The Pony, and it was his own money! Except for the $50 winning scratcher I bought for him on the way out there on Wednesday.

Slots are totally random, you know. This trip, they couldn't seem to quit paying me. Until that last hour on the last night. There were other slots I fed a twenty, and got nothing out of in return. I wish there was a formula I could follow to have such success again. But there's not. Totally random.
Posted by Val at 1:06 PM