CasinoPalooza 3 commenced at breakneck speed, with Hick trying to ferry us around to six other casinos on Saturday afternoon. We came close, but eschewed one that is not a favorite, vowing to hit it the next day.

Our travels put us at River Bend Casino in Wyandotte, Oklahoma, near supper time. The Pony had his heart (and taste buds) set on steak, but agreed to put that off until the next day as well. So we supped at the deli in River Bend. I had the chicken tenders with fries and slaw, Hick had a quarter pound hot dog and loaded baked potato, The Pony had the chicken tenders and onion rings, Friend had a chicken sandwich and fries, and Genius had something I can't remember, perhaps a wrap of some kind.

Anyhoo...while I was helping myself to a cup of Diet Coke from the soda fountain, and BBQ sauce from the pumper thingy, the guys went around the corner and chose a table. Huh. They moved two round tables together, and picked their seats. (Heh, heh! My 13-year-old self just typed: PICKED THEIR SEATS!) This left me with a choice of sitting at a table with Genius and Friend, or at the other table with Hick and The Pony. Kind of. 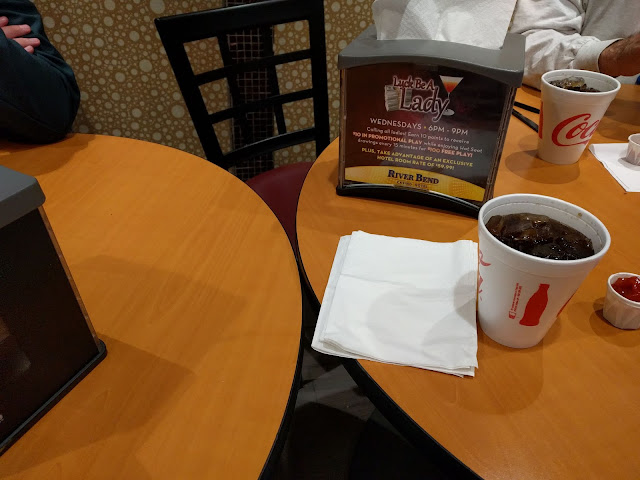 As you can see, I was in No-Woman's Land. Neither fish nor foul. A gal without a table. Two tables diverged in a casino deli, and I couldn't couldn't choose one less occupied by, because neither had room for me. If the tables had remained separate, I could have sat at one. The way it was, I had to sit in between, and have part of my stuff on one table, and part on the other. Just another indignity to which I've sadly grown accustomed.

Oh, and Hick said he'd get me a cup of ketchup as he went back for his soda. 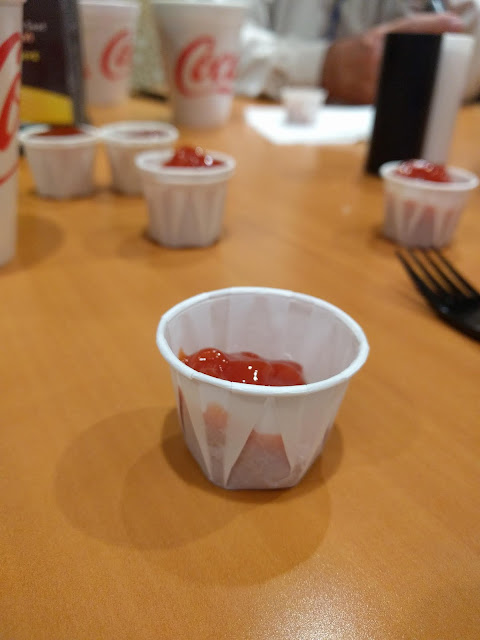 How sad is THAT? Hick is obviously not a ketchup lover like The Pony and Val. Thank goodness The Pony volunteered to go get me some REAL ketchup, not just a couple drops! You may notice that Hick has two cups of Diet Coke. Imagine if I'd volunteered to bring him soda, and set down a cup with a couple sips.

Too bad I was so involved in chowing down that I didn't get a picture of my plate. The slaw was excellent! The chicken and fries were above average. Our culinary gaming tour will continue after the Saturday CENTSus.
Posted by Val at 2:19 PM