I might have let it slip that our family Christmas celebration this year was CasinoPalooza 3. Hick and I met The Pony and Genius just across the Missouri border into Oklahoma. We chose the weekend Genius could get away from work, and The Pony was finished with finals and on the way home. I gifted them with money that could be used as their casino bankroll, or socked away for gifts they wanted to buy themselves. Both chose to put some away, and use the rest for wagering.

CasinoPalooza 3 was only a winning extravaganza for Genius. The rest of us had our ups and downs. You know how it goes. Well...maybe you don't, if you're not a gambler. Anyhoo, you win a little, and then play it back, and before you know it, your profit is gone. I can avoid that if I cash out every time I double my money or better, and save the tickets until we leave. Otherwise, not so much. Easy come, easy go.

I had a couple decent wins, but nothing spectacular. 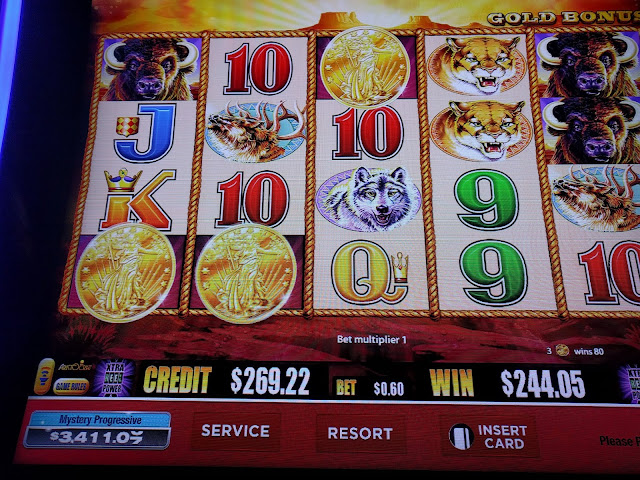 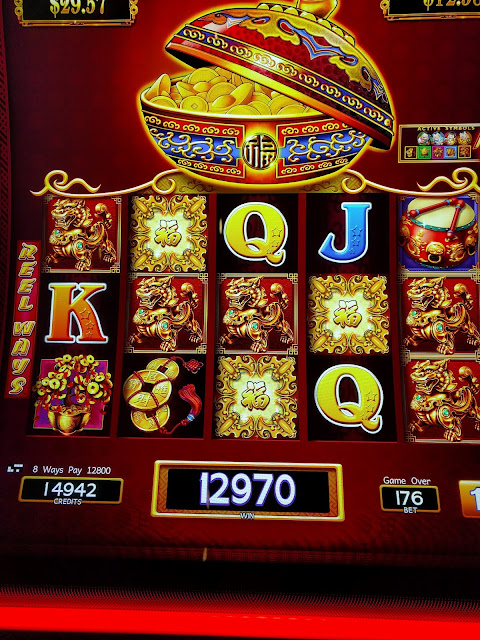 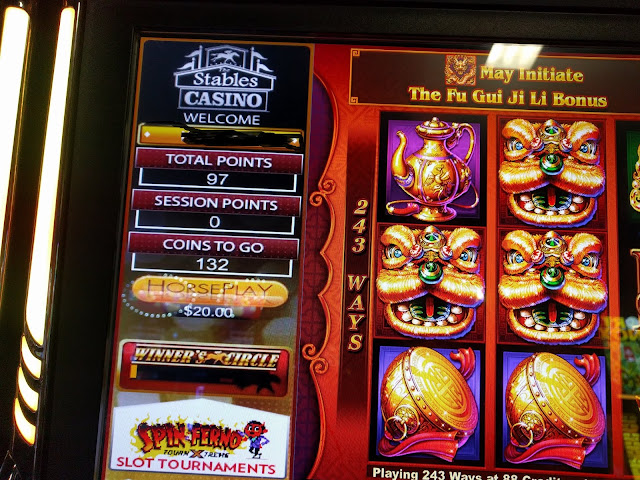 And because Val is a fairly lucky gal...my name was called as a promotions winner at The Stables Casino, about five minutes after we got there and claimed our free $5 Old People play. I've shown you the screen with my prize, which was $20 of HorsePlay, meaning free play on one of their machines designated as part of their Party Zone. But because I'm a gambler, such luck didn't hold, and I played it back in until it was gone.

Funny how I saw Friend playing a game, which had some kind of buffalo standing up top, which would stomp the ground and shower the playing area with bonuses and wilds. In fact, Friend was at the left end of three identical machines, and I sat down at the right end of the row. He won over $100 pretty quick, and moved over to the middle machine, where he also won over $100 in a few spins. Well! My machine wasn't doing anything. The buffalo would stop, but I got nothing! Friend went off to tell Genius of his good fortune, and I moved to the machine on the left end. As I was playing it, Genius and Friend returned, along with The Pony. Genius sat down to play the middle machine, and you guessed it, immediately won over $100. I continued to play, getting nothing for my buffalo stomps, while Friend apologized, saying he never said I should play it.

At our next casino, Buffalo Run, we all convened in the back room (except for Hick), and went our separate ways, playing different kinds of machines. I was just leaving The Pony after finding him along the back wall when Friend ran up exclaiming that Genius had just won $230! Of course I went to see, since it was on my way to the bathroom, where I was headed (too much free Diet Coke!).

Genius sat at a penny machine betting $.40 a spin, at a slot with 7 reels, the theme being 7s, with different colored 7s spinning around, sometimes on fire. I don't play this game, so I wasn't familiar with its particulars. I wish I'd gotten a picture. When I walked up, Genius was at game 20 of 45 free spins, and his jackpot was still accumulating. It was like that machine wouldn't stop giving him free spins. At the time he reached his last one, Genius's bonus had won over $400!

Of course Genius and Friend were giddy with delight. It didn't hurt that they'd each had a couple of drinks. As the slot was counting the bonus money over into the total money, I left them and headed on to the bathroom. When Genius found me later, he had more to tell.

"The minute you left us, Mom, a security guy came over and asked to see our ID!"

"Well, you ARE younger than the rest of the clientele. So you kind of stand out."

"The bonus hadn't even finished counting out when he was on us!"

"Did you enjoy smugly flipping out your ID to show that you are 24 years old?"

"He thought Friend's ID was FAKE!" [Friend is only a few months younger than Genius]

"Yeah! People always think my ID is fake! They say, 'Why is the picture taken from so far away?'"

"Mine--remember MY ID? Mine is the opposite, too close to the camera!"

"Heh, heh, I had that picture set to come up on my phone when you called me! And it was the black-and-white copy they gave you until your license came in, so it looked even worse!" [I didn't have the courage to ask Genius if he was still using that photo for my calls]

"Anyway, that guy was being a real jerk about the IDs, and I wanted to say, 'They were good enough for your bartender every time we got drinks!' But I didn't."

"Probably just as well. He's only doing his job. They don't get many people in here of your tender age."

"He followed us everywhere we went, like he was trying to find a way to kick us out."

"Well, you can obviously smell that you've been drinking. So it's a good thing you behaved yourself."

Yes, Genius was thrilled with his win, and showed more restraint that the rest of us in gambling it back. Even with his drink budget, he went home with a nice chunk over his original Christmas gift bankroll.
Posted by Val at 2:23 PM