I'm Pretty Sure Hick is STILL Trying to Kill Me: Operation Kidney Overload

For some time now, my subconscious has been trying to tell me that Hick is not all he seems. He's MORE than he seems! Perhaps even an evil mastermind, bent on getting rid of Val, leaving no clues. As far as I know, Hick doesn't have a spy umbrella tipped with a poison needle. But when I asked him to put an umbrella in the car for me, he DID pick the one with the fabric coming off two of the spokes, leaving their would-be impalers exposed.

It was Saturday, and we were going to the funeral home at 4:30, to pay our respects to the ex-mayor's mother, who passed away at the age of 97. I went to town for my magical elixir, but The Gas Station Chicken Store was FULL of people getting gas. I could only imagine how long the wait would be inside, in their narrow aisles. I went to Country Mart to pick up a couple items, then went back. Still busy. I figured I could get a Polar Pop at Orb K, and also some scratchers. So I forsook The Gas Station Chicken Store and its customer overload.

Bad decision, because Orb K had a sign taped across their two soda fountains, saying that I could have water or lemonade, but that everything else was not working. Bummer. Like Richard Gere as Zach Mayo in An Officer and a Gentleman, I had no place else to go! I went home and sent Hick a request to bring me a 44 oz Diet Coke on his way home.

I started a batch of Chex Mix, trying to get a leg up on the 5 batches that I give away for Christmas. It takes a half hour to put the ingredients together, then two hours of baking at 250 degrees, stirring every 15 minutes. Then it has to cool. Then be put in the containers. I was trying to get all my Chex gifts done before CasinoPalooza 3, so I wouldn't have to rush to do it when we get back.

Let the record show that I was also wrapping gifts before and during the Chexcapade. I have a lot of gifts that need wrapping, including those that Hick gets and assumes I will wrap for him. So I was pretty rushed. I'd need to finish a batch of Chex by 2:30, then eat some lunch, then get ready to go. I didn't even have time to check my innernets on HIPPY that morning, having to delay such business until lunch, after 2:30, at New Delly.

Anyhoo...Hick had gone to his Storage Unit Store, but the cold meant only a couple shops were open. So he closed up, and went Goodwilling. Then he went back to his Storage Unit Shed to meet people who were buying some of his stuff off Buy/Sell/Trade. He texted me that it would be a while before he got home with my soda. I replied that was okay, since I wouldn't have time for it until after 2:30 anyway. I told him that Orb K had a broken soda fountain, so he'd need to get my 44 oz Diet Coke at The Gas Station Chicken Store.

This is what he brought me. From Casey's, which used to only have Pepsi products, but now has Coke, too! Who knew? Not this unobservant Val! You might notice that it's 52 OUNCES! Who in the Not-Heaven needs 52 OUNCES of soda? I am not a glutton. That is outrageous!

Anyhoo...Hick put my magical elixir in FRIG II while I was in the living room wrapping gifts. So I didn't see it until I was ready to have lunch. But I asked about it.

"Where'd you get my Diet Coke? The Gas Station Chicken Store? Did you see my text about Orb K?"

"They only have Pepsi! That's why I don't get my soda there!"

"Don't you know I'm smarter than to buy Diet Coke for you?"

"Well, what you bought WAS Diet Coke, that I asked for. So how am I supposed to know you're smart enough to get the right thing when TWICE NOW  you've said you didn't buy Diet Coke?"

When I got a look at the cup, I was pretty sure Hick was trying to kill me.

"FIFTY-TWO OUNCES? Why did you get so much? You know, right, that I won't be here sipping it all afternoon. I have less than two hours to drink it. And I can't drink MUCH, because I'll be at the funeral home, and I'll have to go to the bathroom!"

"They have a bathroom at the funeral home, Val."

"I can't drink all that now. I don't want that much on a regular day! And it's not in a foam cup. It will be hot."

"I was afraid the next smaller cup wasn't enough. So I got that one."

That's Hick's story, and he's stickin' to it. 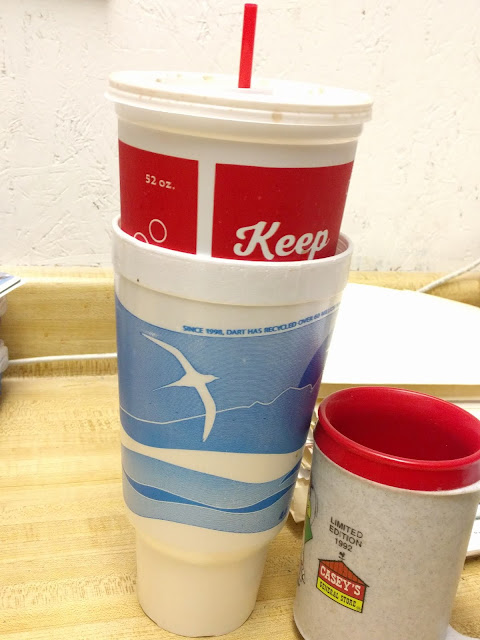 The Casey's 52 oz Diet Coke does not lend itself to double-cupping.