Last Monday, we returned home from CasinoPalooza 3 around 4:00. Shortly after 5:00, Hick drove to town to pick up pizza from Orb K. We thought The Pony would like to try it, since he's a crust fan, and this pizza has crust kind of like a homemade Chef Boyardee deep dish pizza that The Pony enjoys.

I was puttering around in the kitchen after The Pony filled his plate and headed down to his gaming couch in the basement with it. It was only a couple minutes until he hollered upstairs.

"Hey, Mom. I was already to the couch, and I heard a loud noise. I turned around, and that blue chair was rocking really fast. I guess the noise was the broom falling over. I know I didn't touch that chair. I even tried walking into it, and it didn't rock. It moved sideways like I pushed it. Anyway, I set the broom back up." 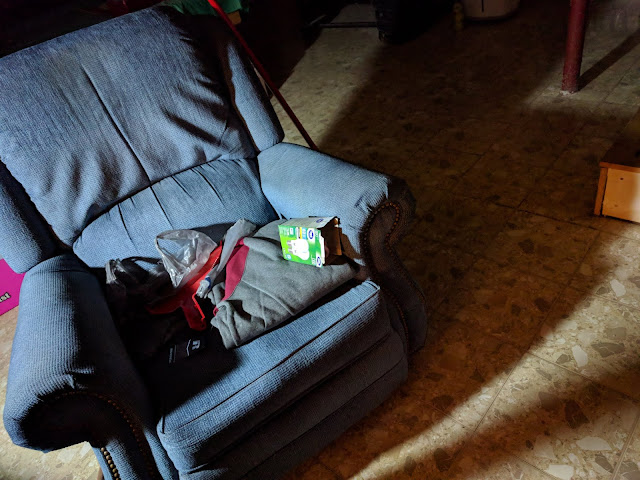 Wednesday night was the Survivor finale. I always record Survivor, and Hick comes to the basement to watch with me when he gets back from the auction. This time, he'd said he probably wouldn't watch Survivor with me that night, since it was the 2-hour finale, and he'd be up too late. But he hollered down to ask if I was going to watch. I stopped my New-Delly-ing, and went out to get the DVR ready.

I was setting my purple bubba cup of ice water on the TV tray that acts as an end table, beside my OPC (Old People Chair), when I heard a "CRACK!" It was the sound of the broom falling from the old blue chair to the tile floor.

"Huh. That's funny! The broom did that to The Pony on Monday night. Fell over for no reason."

"You must have hit the chair," said Hick, who wasn't even watching, being mesmerized by The Amazing World of Gumball cartoon that The Pony had on the TV.

"No. I didn't touch the chair. I know how to walk! I walk around down here all the time without hitting the chair. And it wasn't even moving when I turned around!"

"Yeah. Unlike mine, where it was rocking forward and backward," contributed The Pony.

I swear I had not touched that chair! I've been walking out there for 18 years, and I don't run into that chair.

"Home in 15 minutes if someone can help me carry in."

"Ok. The chair did the thing again."

When I got home, I had a few questions for The Pony.

"When did that happen? Just curious."

"It was sometime after noon. Maybe a half hour before your text."

"Huh. I stopped by the cemetery at 12:15 or 12:20. I only stayed a minute, because there was an old couple a few graves down from Grandma's, putting out flowers. Then I ran in Country Mart for bread and bowls and peanut butter, and texted you when I came out."

Sometimes coincidences are kind of interesting. On Saturday afternoon, when I got down to my dark basement lair and picked up my glasses...there were fingerprints on the bifocal part. So much that I had to wipe them off. I hate getting fingerprints on my glasses. My Puffs have lotion on them, you know. And are not good for cleaning glasses. So I even put my glasses up on my head when I blow my nose, so nothing gets smudged on them while wiping my nostrils. I hadn't had a smudge on my glasses since last Christmas when The Pony was home.

"PONY! Did you or Dad get my glasses out of my office? When he was wrapping presents on the pool table yesterday?"

When I went down to my lair on Sunday, and saw that my glasses were smudged with fingerprints on the bifocals AGAIN, I asked Hick about it when I went upstairs.

"Did you use my glasses while you were in the basement?"

"Well, there were fingerprints on them for two days in a row."

"Huh. Maybe your mom or dad is trying to tell you something."