A blow was struck by Even Steven, on Val's Future Pennyillionaire Fortune this week, when she found absolutely NO coins in her broad travels to convenience stores, supermarkets, post offices, and a casino.

Okay. The Truth in Blogging Law requires me to modify that statement. Like an airport rental car company TAKING a reservation, but not HOLDING a reservation...Val FOUND a coin, but was unable to PROCURE that coin for her collection. 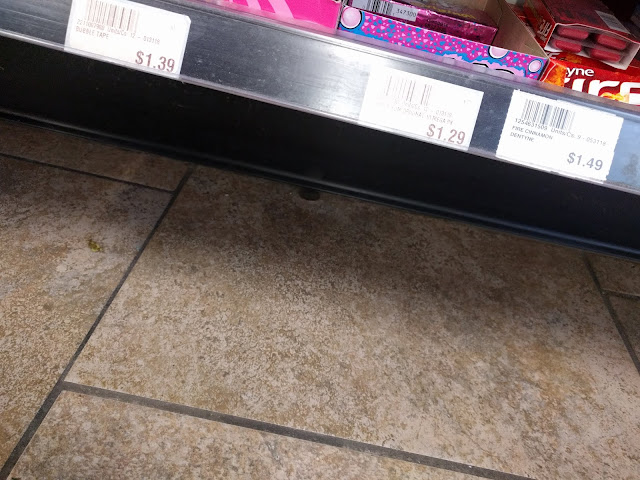 See it there? Up under the Bubblicious? I saw it, too, when I came in the door. I knew it was a quarter, and I was dead-set on snatching it for my collection. The ravages of time, however, in concert with Val's dedication to never feeling a hunger pang...prevented me from picking it up.

Not for a lack of effort, though. That's probably the most strenuous workout I've had in decades. I bent over numerous times. Tried to stick my toe under there like I was doing the Hokey Pokey. Squatted almost as deep as a Sumo wrestler. Extended my arms like an overworked Stretch Armstrong. Tried everything short of KNEEling. All to no avail.

If only I'd carried in my wooden backscratcher, jammed in the passenger seat-back pocket of T-Hoe, slung over my shoulder by two tied-together rawhide shoestrings...this quarter would have been MINE! I was nearly beside myself with regret, after getting the photo while that same nice ALTHOUGH QUITE SLOW AND VIRTUALLY INCOMPETENT young lady scanned my two winning scratchers, announcing each amount individually. I could see George Washington laying there face-up, but I couldn't reach him.