Hick Got Rid of His Gramps

Some of you might recall, way back in May, Hick showed us his clock. CLOCK! It was a grandfather clock, found in one of his many storage units. I described it back then:

It's a Daniel Dakota brand, the least valuable of the three big grandfather clock companies. They're sold at Walmart and other chains. Hick says this one is solid wood, not veneer. I think that design on the face is called a Blue Moon pattern. I haven't found any grandfathers just like this one as I've perused internet clocks. That little burst pattern up top, and the design at the bottom, add appeal. Hick has listed this noble chronometer for $160. 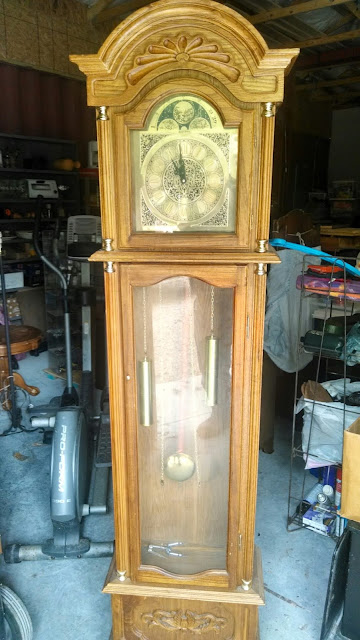 Well, Sunday was almost good news/bad news for Hick. Even Steven has to keep him in line somehow, I suppose, with worry if nothing stronger. Hick had earned about $35 at his Storage Unit Store, which is not great, but not too bad for a Sunday in November with the temperature at 37 degrees. He went to my old work town to an auction around noon. While there, he saw a gun he really wanted to buy, but the auction was going slow. Then a lady messaged him about his GRANDFATHER CLOCK that he has on Buy/Sell/Trade.

Long story not much shorter...Hick said he'd meet her at his Storage Unit Store, where the Grandfather resides, which is also a public venue with security cameras, so people feel safe making transactions there. Hick was afraid the gun wouldn't come up for auction until after he left. So he asked the guy how much he'd take for it, and the guy said, "$100." Hick said he'd take it, but the guy said it had to go through the auction, since it was already listed. Things sped up a little then, and after much stressing, Hick bid and bought the gun for $110. Then he rushed over to the Storage Unit Store.

Within 5 minutes, the lady wanting the clock arrived. SHE LOVED IT! She asked Hick if he would take any less than the $150 he had listed it for on Buy/Sell/Trade. According to Hick:

"I knew nobody had even looked at it for six months. So I told her I'd take $125. That made her happy. She asked if her husband could lift it, since he has a bad back. I told her it was pretty light, and one person can handle it. So they took it. An hour later, she sent me a message saying how much she loved that clock, and how it looks perfect in the space she had for it. That was kind of nice, to know how much she loves that clock."

Hick is an old softy. Or else he just doesn't like parting with his stuff unless he knows it goes to a good home.
Posted by Val at 2:21 PM