The Rich Get Richer and the Poor Get Poorer!

That title is a quote from my second-best ol' ex teaching buddy, Karen, when she and our other buddy Jim used to whoop me at poker every Friday night in Cuba, Missouri. How prophetic she was!

Let the record show that even after consuming mass quantities of buffet food on Wednesday at a FREE casino brunch...Val was not too stuffed to slot. The Pony and I finished filling out his FAFSA, (a form required by universities the government to determine eligibility for grants and scholarships), and headed back to try our luck while Hick was still out junking.

We parted ways for a while. I was roaming around, still all aglow from my previous day's wins, wondering what to risk my money on. I spied a new game that I haven't seen around home. Wonder 4 Boost.

I was attracted to a row of three Wonder 4 Boost slots because I saw a guy getting a bonus with 8 games playing at once! I wondered how that happened, because usually the bonus on the Wonder 4 games I play is the Super Free Games, where you get 4 games playing at once, for 8 spins. And an extra 3 spins if you hit three of those gold coins in one game.

I sat down and put in a $20, selecting Buffalo as the game on all four screens. A very strange thing happened when I got a gold coin. It shot up top and disappeared, making a little zingy noise. I had no idea what that was all about, but I played on. About five spins in, I got three gold coins to hit a bonus. I was happy as a clam to see that I had 8 free spins of my 4 games. Even in the bonus, those gold coins zinged up top when I hit one. No counter or anything telling me what they were good for.

THEN THE MOST AMAZING THING HAPPENED! My screen filled with EIGHT games! And I kept getting the three gold coins for extra games. As you can see in my picture, at the bottom in tiny white print...I had 51 free spins! 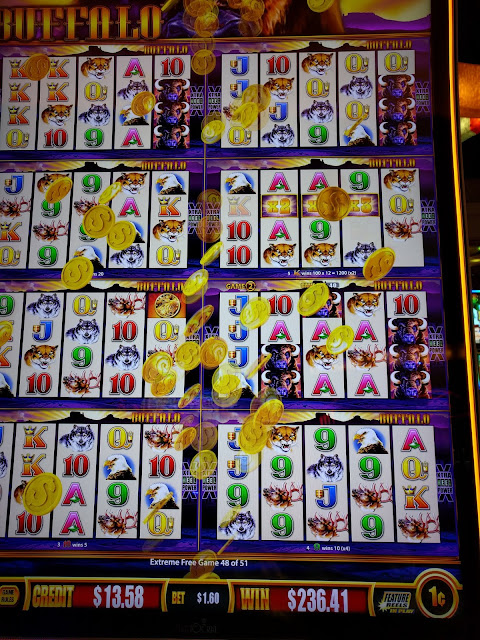 I was on spin #48 here. I took the picture for the coin show, and that one screen where I have a 2X 3X 3X. That means it multiplies that times my eagle, king, and the two tens from the first column. Not as good as buffalo, but still pretty good! I don't know the total I cashed out, but it was in the $200s, above that amount showing, because I didn't play any back after the jackpot.

All that winning ramped up my appetite for our second buffet of the day! Then we returned to play some more. Again, I wandered around, digesting my feast, looking for anything that caught my eye. It was a new game, Sugar Hit. The minimum bet was 60 cents, so that's what I played.

Well. I was only $10 into my twenty when I heard a winny kind of noise. I wasn't really paying attention to the screen, because I was trying to figure out what this game was all about, reading the stuff that popped up, or was on the top screen. Huh! 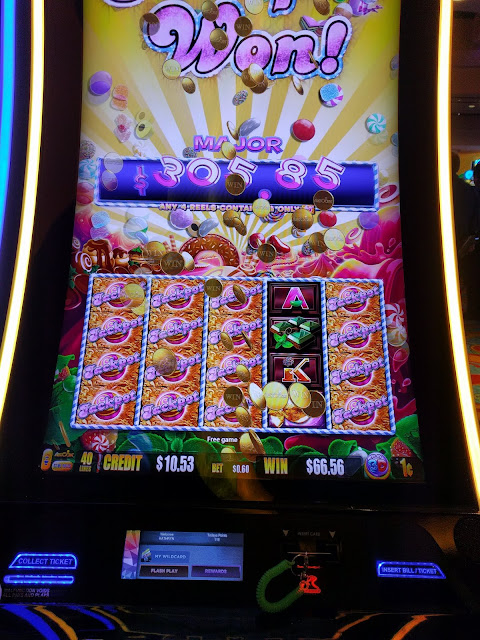 Looks like those four columns of jackpot thingies gave me the MAJOR, which was $305.85. I felt sorry for the lady at the other end of the row, who had been playing when I sat down. Don't you just hate it when somebody sits down and gets a bonus immediately?

I let my money count out, which is sometimes considered obnoxious, since you can touch a button and get it done with, without the flashing lights and fanfare. That lady congratulated me, and I probably made things worse by saying, "I don't even know how this works. I've never played it before!" Then I proceeded to make things even worser. 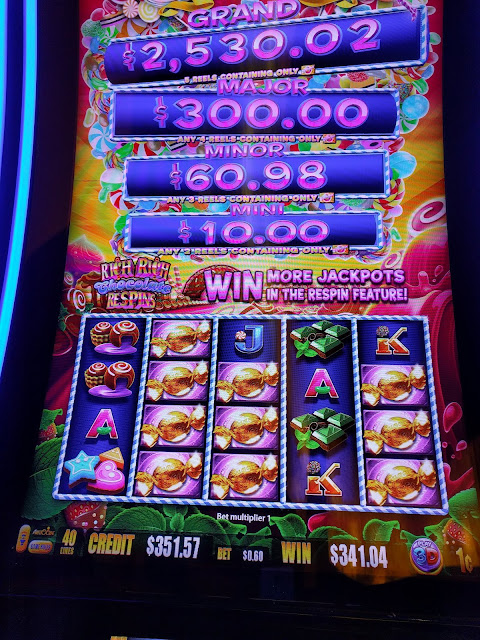 By giving it a backup spin before cashing out, and that backup spin hitting three chocolate coins, which put me in an 8-spin bonus, which made me even more money. I cut the count-up short, and cashed out as soon as the bonus was over. No need to torment that poor lady any further.

But WAIT! On the drive home Thursday, Hick missed his turnoff for the little hole-in-the-wall casino we like in Chekotah, Oklahoma. He didn't want to turn around after finally finding a route back, so he decided we'd try out a different one. Which happened to be the Creek Nation Casino in Muskogee. I gave Hick a loan, since he had burned through his bankroll. We planned to spend 30 minutes there.

I'm terrible with directions, and I made Hick walk me around inside, noting landmarks, so I could find my way back to the side entrance to meet him at leave time. All the way up front, Hick said, "Here's something you like. Here's some Buffalo. Now just stay along that wall, and it will take you back to the door." With that, he left me. I walked all the way around the four Buffalo 4 Tall Fortunes machines, and settled on the first one we'd walked up on.

Of course I hit a bonus! I didn't think to get a picture there, but it was just a tad over $300. I walked around some more. Played an older style Buffalo game for 15 minutes and cashed out a dollar over the money I'd put in. Then I found two Dancing Drums near the point where I was to meet Hick. I hit a bonus on the first one, but it wasn't a lot, and I played it back. Then I switched to the second one. It wasn't paying as good. I gave Hick a $5 bill from my pocket, since he was out again. He played my first Dancing Drum for about 10 minutes on that amount, before finally losing. I was ready to leave as soon as I played out my $20. It hit a $60-something bonus on my last spin. I gave my tickets to Hick to cash out while I went to the bathroom. You know. So he didn't feel like such a loser.

When you're lucky, you're lucky, and when you're not, you're not. It's like all or nothing. Poor Hick was not the winner this trip, but he has been in the past. He'd better get to sellin' some junk so he'll have his coffers full to lose in a couple weeks.

Val has a bloated bankroll for her next gambling trip, which will be CasinoPalooza 3 in mid-December. It's the main Christmas present for the boys, suggested by Genius. They generally stash away part of their allotted gambling bankroll at the beginning, to squander on their desired Christmas gifts. Then they try their luck, which is usually break-evenish. At least for the past two trips, which is all we've had since we started the CasinoPalooza tradition. The Pony generally does a bit better than Genius. Who doesn't really care, if there are drink bargains!
Posted by Val at 2:22 PM