With a Little Help From My Mens

After yesterday's tale of Val fattening herself up like a prize pig just before the county fair...it may surprise you that Val is peeved about missing out on even more calories! It's true. I regret that I was charmed and tricked out of treats that should have rightfully been mine!

Last time we stayed free at Riverwind Casino, I showed you a picture of our parting gift. 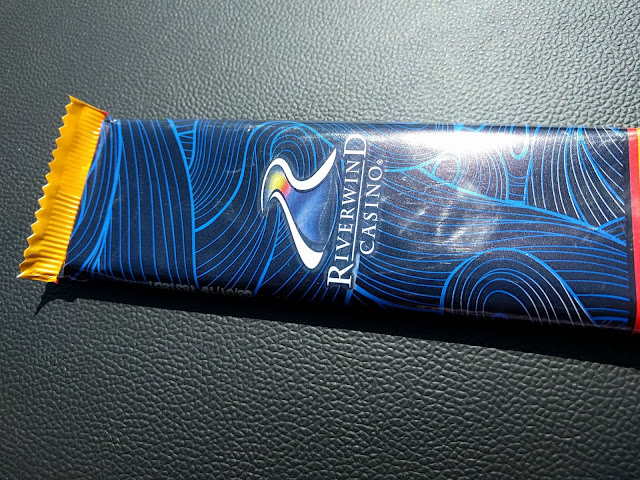 That's some delicious chocolate! In the form of a fund-raiser candy bar, only free. Well. I couldn't believe my luck when the man behind the counter gave me two Riverwind candy bars AT CHECK-IN this time! I put them in my purse while waiting for Hick and The Pony to pull up with the luggage. There was a line this time. I guess other folks got wind of this FREE CHOCOLATE policy at Riverwind Casino Hotel.

Anyhoo...Hick went out to move A-Cad around to the back parking lot while The Pony helped stow away our bags. I was setting my stuff out, and put the two candy bars on the counter over the mini-fridge. Of course The Pony noticed them. It's not like he's a stranger to Riverwind chocolate. Back when I got my player's card there (which The Pony said he didn't want, even though it meant $5 in free play), I was given one of these candy bars. And The Pony, standing right beside me, had said, "Ooh! CHOCOLATE!" So I gave it to him. Never having tasted the sweet solidified nectar. I'm surprised he didn't go back later for his own player's card, just to get a candy bar.

Now here we were in the room, and he noticed the treats. Well. What ya gonna do? Deny your youngest child a candy bar, when you have TWO? Not this ol' Val. "You can have one. It's okay. I don't need it anyway."

"You could put it away. So Dad doesn't see it. Then you can have it later."

I didn't hide it, but left it on the counter amongst my purse and glasses case and Puffs box and gambling purse. The Pony went to set up my laptop (we had to file his FAFSA while we were there), happily devouring his candy bar.

Let the record show that Riverwind chocolate is very sweet. Almost as sweet as Val herself! The Pony got halfway down the bar, and set it on the dresser holding the flat-screen TV. "That's really sweet. I don't think I can finish it."

Of course it's the first thing Hick saw when he returned to the room. "Oh. Did we get candy bars?"

Hick showed remarkable restraint, not eating the other half of the candy bar until later that night, before I got back to the room. I suppose he tried to trick me, because he left the wrapper right there. Even though it was empty of any chocolate, and a wastebasket was at the end of the dresser. I didn't mention the remaining candy bar. What Hick doesn't know won't hurt him. Besides, he's DIABETIC! He shouldn't even be eating chocolate!

Wednesday afternoon, while Hick went A-Cadding around Norman to look at junk stores, The Pony and I hung out in the room, filling out his FAFSA. That's a dang government form that all colleges use to determine scholarships and student aid. Of course neither of my boys ever qualified, not only because they had other scholarships, but because Hick and I made too dang much money! It's not a big deal. I just hate filling it out every year (for TWO students until now) when I know we don't qualify. It's just another system the feds use to track your income and taxes, I think.

It was always a pain for us, because we can't use the button that automatically imports your IRS info to the FAFSA, because during his freshman year, Genius had his identity stolen. SO...we always had a special number mailed to us each year to file our taxes, and had to type in all info by hand on the FAFSA. I was prepared, though! I'd brought along last year's 1040 for our reference.

Anyhoo...we had it done in less than 45 minutes, since The Pony did it under his own identity, and I didn't have to fight with the password system for my parental identity for an hour, and then pretend to be him, and text him for pertinent info.

"Pony. What's this on the floor? This gold wrapper."

"Oh, that's from the candy that was there when we checked in. By where you put your purse. There were two. Caramel, I think."

"NO. And now THIS wrapper is on the floor! I get so sick of picking up after him. And I didn't even get any of the candy! That was clearly meant for us each to have one!"

Thursday, Hick drove the car around while I went to the front desk to make sure we didn't have any charges on our FREE room. We did not. But the best part is...the gal behind the desk gave me TWO CHOCOLATE BARS! I put them in my purse, on top of the other one from check-in. That The Pony had let slip was in my possession when Hick tricked him into divulging that info.

We were about an hour up the road, having just consumed our McDonald's Sausage Egg McMuffin (this time done to perfection, and mine not charred), when Hick said, "If you had that other candy bar, now would be a good time for me to have dessert."

When I broke it, the sections were about 30/70. Darn me for not wanting to make my hands melty by gripping tighter!

"Okay. I'll even give you the bigger half."

I still kept mum on the TWO CHOCOLATE BARS that I'd been given upon check-out. Until we were about 3 hours from home, at 4:00 p.m. It was looking like our Casey's pizza slice for lunch was going to be it until we got home.

"You know what? They gave me TWO MORE candy bars when I checked out!"

"Okay. We'll have a Slim Jim, a candy bar, and some Chex Mix for our supper. But you can only have it before you get to Genius's college town, where the road gets all trucky and has the concrete barriers."

"Okay! Whenever it's time, you can get it ready for me."

Yes, I may have excessively enjoyed TWO buffets on Wednesday. But on Tuesday and Thursday, The Pony and Hick had kept me from overindulging on chocolate and caramel. Even though I don't think either of them did it to help ME.
Posted by Val at 2:15 PM