It Was Like Val Carried a Rabbit's Foot Tattooed With a Four-Leaf Clover!

Tuesday evening, we picked up The Pony at his apartment, and headed to Riverwind Casino to check in. No sense in booking a regular hotel when you have two nights free at a casino just ten minutes across town from The Pony!

After stowing away our stuff in the room, we all headed to the casino for 30 minutes, to stretch our 9-hour-drive legs, and wait for rush hour traffic to abate before heading to our Thanksgiving steak dinner. Neither The Pony nor I had much luck in our efforts, nor did Hick. We let him go off on his own, while we always check in with each other, or play in the same general area. At least I won some of my money back, and made sure to cash out the tickets before leaving the casino for supper. You never want to leave the casino with a ticket. Just in case. I stashed that cash in a SAVE pocket, to make sure not to spend it back. That way, I never leave totally empty-handed.

Since our free room was at the end of the hall, like last time, we parked A-Cad in the less-crowded lot upon return, and used the door at that end for entrance and exit. A brief pit-stop in the room, to fuel up with cough drops and tissues, and we were ready for our after-supper casino excursion. I've asked The Pony if he'd rather do other things while we're in town, and he says there's really nothing else to do. Or maybe he just doesn't want to be seen with us!

I told The Pony that the first stop had to be one of the FREE DRINKS alcoves. There's no free alcohol in Oklahoma casinos, just like that's also banned in Missouri casinos. But there's a soda fountain and coffee, tea, or water. Still suffering from the Hickovirus, I definitely needed a cup of water by my side.

Just outside the soda room was a bank of four Fu Dao Le slots. If you're a casino-goer, it's the game with a minimum bet of 38 cents, and a bonus that is usually heralded by a screen full of laughing babies. "I know these weren't kind to us last trip, but I feel like I need to play this one right here." I chose the third machine. Just a hunch. "I know you don't like to play it, but sit down with me a few minutes. I'm putting in a twenty, and then we'll go to your quarter Lucky Ducky slots."

The Pony was agreeable. He sat down at machine number four, to watch, and every now and then push a button. I don't mind. He's pretty lucky, that Pony. Sometimes I kick a few dollars his way if he gets me a win, and he's running low. I've told him, though, about casino rules of paying whoever hits the button, and not the person whose money or card is in the game. I usually sit with my finger poised over the betting amount button, and tap that for my turns. The Pony rests his hand over the SPIN button. I don't generally like to play with the SPIN button, because it's cushy, and depresses a few centimeters before it spins. I prefer the instant tap on the amount button.

Anyhoo...I put my bill in the Fu Dao Le slot, and started playing. I like to bet 88 cents on this game. I was only three spins in when those laughing babies materialized! "OOH! We've got the bonus! This is great!" The Pony agreed. He's never seen the bonus. I had 8 free spins coming. With about half of them gone, I got THIS: 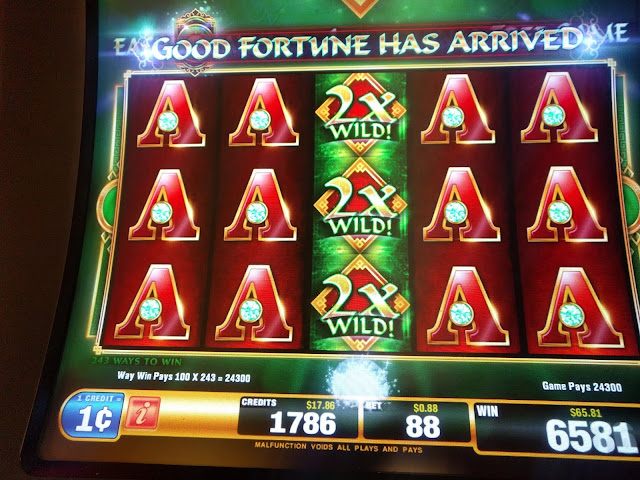 The Pony and I knew it was something good. But not nearly as good as it was! The Pony saw it first, down there in the small print at the lower right. "You just won $243.00 on that spin!"

Yes. Yes I did. Fantastic! But my bonus was still playing, giving me some extra spins. I had already mentally put that $243 ticket in my pocket to save until the end of the night. But my slot machine had other ideas. 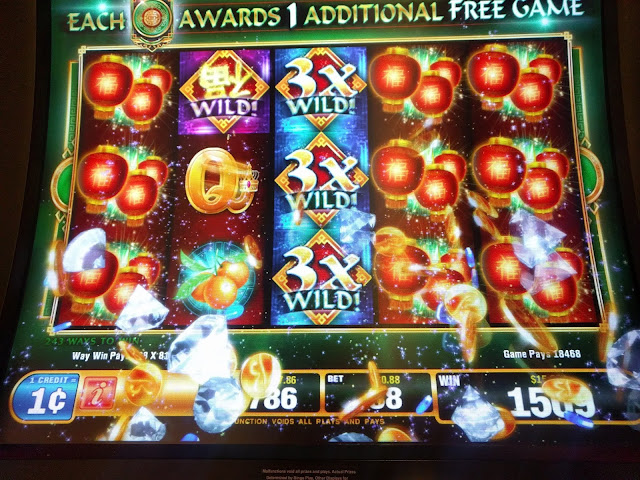 This one wasn't a full screen of those lantern/balloon thingies, so it didn't pay as much, but I'm definitely not complaining! I caught the picture in the middle of the coin show, but you can still see in the bottom right that it paid me $184.68. The Pony was downright giddy. He didn't ask for a cut, even though I'd let him hit the SPIN button to start the bonus. 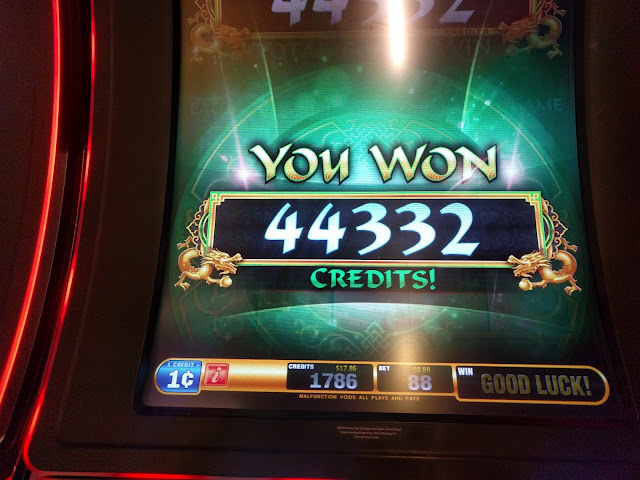 In fact, I had a really good night. I snapped a picture of my tickets right before The Pony left for the night, for Hick to drive him back to his apartment. 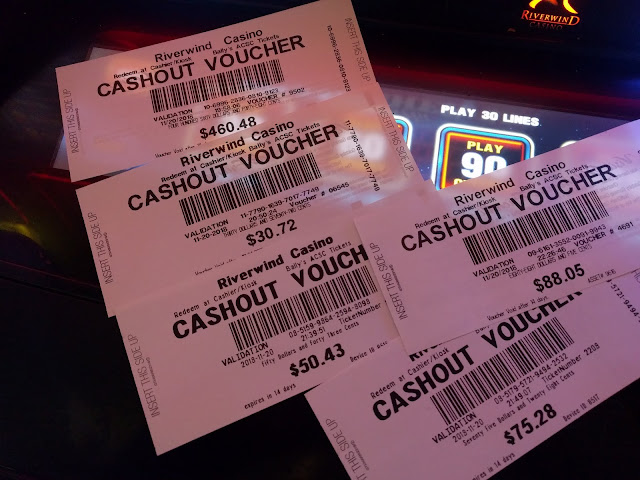 As The Pony was leaving, I walked him to the back entrance, and cashed out the $88.05 ticket to give him $8, since I won it on a QuickHits machine where he picked the bonus for me. Oh, and I'd already given him $65 from some before-supper tickets I'd cashed before we left, since he was running low on his gambling stake.

Yes, I had a very good night. A good trip, as well. Didn't even have to dip back into my own gambling stake that I'd taken along, after a night like this! Uncle Sam is already stretching his hand out for HIS cut.
Posted by Val at 2:11 PM