Let the record show that Val has reached that stage in life where she is not about to deny herself simple pleasures. While I make wise choices in the food department during everyday meals, I see no reason to limit my pleasure on a mini-vacation over the Thanksgiving holiday.

Yes, I think I made a wise choice on my Classic Chopped Steak and steamed broccoli at Saltgrass Steakhouse on Tuesday night. I eschewed a baked potato smothered in sour cream, or crispy french fries, for the broccoli. I went with the chopped steak rather than delicious fried chicken fingers. So that was a win/win for Val.

Wednesday, however, was a dietary disaster for wise-choice Val. Hick and I had a free old-people brunch courtesy of our casino play. Who turns down a free brunch that costs $17.00? Not this ol' Val and skinflint Hick! I know what it cost, because we had to pay for The Pony. But still, it was our breakfast/lunch, and we saved 2/3 the cost.

Val never met a buffet she didn't like. Of course I had to have breakfast food, so some scrambled eggs, a couple slices of see-through bacon, and a sausage patty hit my plate first, accompanied by a biscuit with gravy. Of course there were a couple of cinnamon sugar donut holes that needed tasting. And a blueberry muffin. But wait! Lunch foods were also on the buffet! So a fried chicken thigh was necessary. I had to eat the whole thing to determine that it was not nearly as good as the chicken thighs from The Gas Station Chicken Store. But wait! Lunch eaten with breakfast is never complete without a dessert. But in case the dessert is too sweet, you need something savory nearby to end your feast. 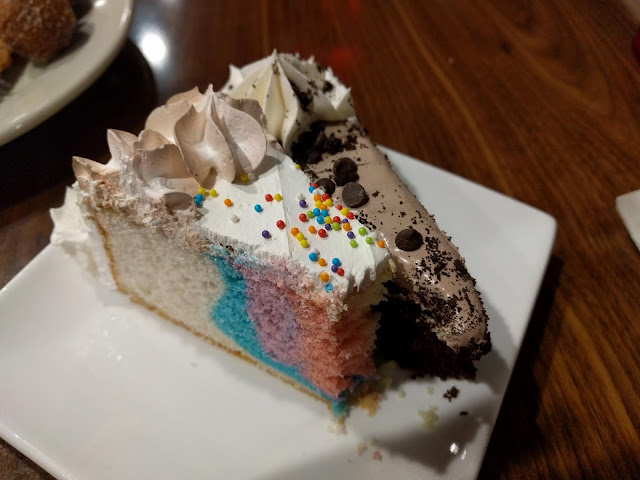 Of course, who takes ONE kind of cake when you have a the option of two? The pretty one is called Riverwind Cake. I suppose because the ribbons of color mimic the wavy design of their logo and ceiling lights in the casino. I wish I could report how ambrosious that cake tasted. But I cannot. In fact, that's all I ate of it. I was hoping for perhaps a coconut flavor, or at least vanilla. Sadly, this cake was devoid of all flavor. If I hadn't seen it on my fork with my own eyes, I could easily have been eating pressed sawdust. The whipped cream icing and sprinkles were also bereft of taste. The chocolate version was the same, except maybe with a hint of cocoa. I ate the same amount of it.

Behind the cake is a plate holding another donut hole, leaning against a chicken-fried steak patty. That was also strangely tasteless, which I could tell after one bite. I ate the donut hole, though!

Whew! I was stuffed. That's a week's worth of food for me. I know some of you exist on a couple grains of rice, crystal clear water from ice melting in the Alps, and perhaps some tofu and kale if you are feeling particularly decadent. But Val comes from heartier stock.

Oh, yeah. After having the brunch at 11:30 a.m., we took The Pony grocery shopping, Hick to some antique/thrift stores, and did a little gambling. Then we were ready to HIT THE GOLDEN CORRAL BUFFET for supper! It was The Pony's wishes. Who was I to deny him?

I had no trouble finding room for a salad, a roll, a chicken thigh, two pieces of fish, and some pot roast. I passed up dessert, though.

I'm pretty sure I watched my butt grow four sizes that day. It must have been the complimentary sugar cookie I took from the jar on the casino hotel's reception desk.
Posted by Val at 1:44 PM