The 3 Thanksgivings of Val Thevictorian

A last-minute change of plans released Val from her kitchen servitude this Thanksgiving, and allowed her to spend two nights in a casino hotel while visiting The Pony. He had originally made the decision to drive home, but texted me Sunday saying he'd been having nightmares about failed brakes. I guess I can't really blame The Pony for shying away from a 9-hour drive. Especially after that drive was almost his last, two years ago when he started home for Thanksgiving.

Anyhoo...we picked up The Pony at his apartment on Tuesday evening, and continued 10 minutes across town to check into our casino hotel with a free comp room. The Pony chose a steakhouse for his Thanksgiving Dinner. I must say, it was delicious, even though I'm not a big steak eater. 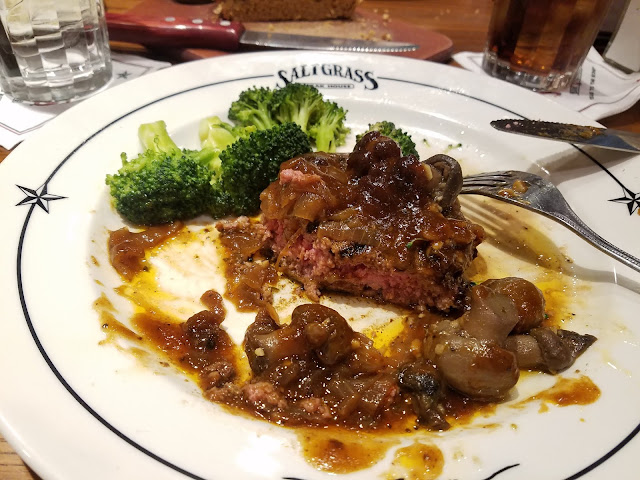 Yes, I know that's just a glorified hamburger. But oh, how glorious it was! I didn't think to take a picture until I was partway through it. Let the record show that I'd already given Hick half my steamed broccoli, and some sauteed mushrooms and grilled onions with cognac pepper sauce. Hick LOVES mushrooms. I actually felt kind of sorry for him, having the filet mignon. His big ol' plate just had that little filet sitting there, with a side of garlic mashed potatoes. Nothing to dress up the plate. No color. So much empty space. So I shared. I ordered my chopped steak medium, and I'd say that's what I got. It was fantastic! Not at all like a Burger Brothers meal!

Val's 2nd Thanksgiving Dinner was at the Casey's General Store in Adair, Oklahoma. 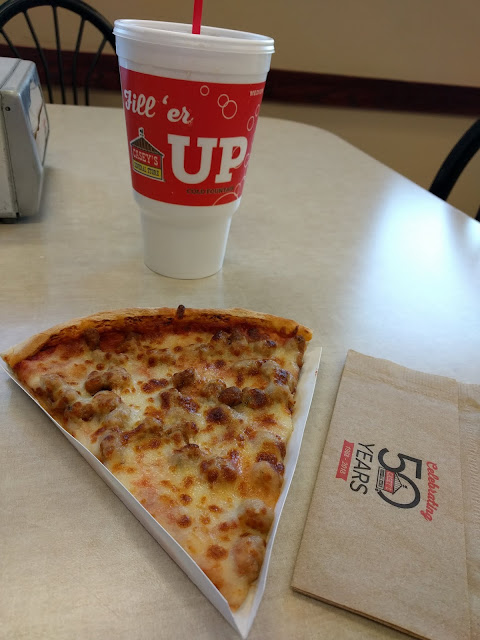 That's a slice of sausage pizza and a 32 oz Diet Coke. We always stop at this store for gas. It's about 5.5 hours from home for us. On the way out, we have the pizza special for lunch. And this time, on Thanksgiving Day, we also had it for our lunch on the way home. It's usually better than this slice, which had been sitting in the warmer since noon, I'm thinking, when we got there at 1:17. I sent the picture to Genius.

"Just sitting down to Thanksgiving Dinner in Adair, Oklahoma."

Val's 3rd Thanksgiving Dinner was at an Applebee's near St. Louis, on Friday. 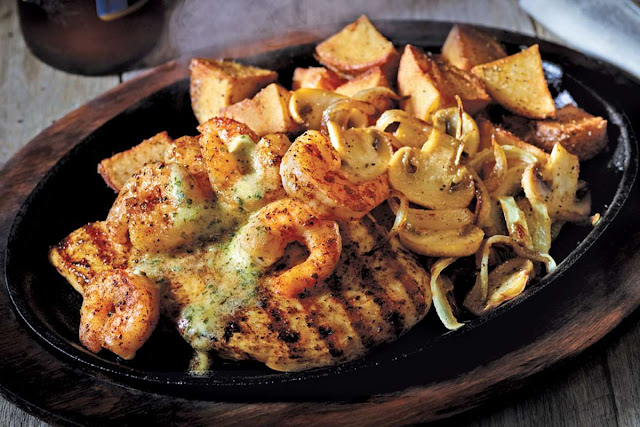 I had the Bourbon Street Chicken and Shrimp. This is off their website. I KNOW I took a picture of my actual plate/skillet, because I remember fiddling with the flash setting on my phone. Hick also recalls me taking a picture. I guess Even Steven feels that I am not worthy of THREE Thanksgiving Dinners, so he gave my photo the old heave-ho.

This meal was delicious, even though mine had fewer mushrooms/more caramelized onions, which were underneath the chicken breast, still sizzling. The shrimp had some sort of garlic butter seasoning. The red potatoes were crispy. Mmm. I wish I had some right now!

Hick had the same as me, and Genius and Friend both had a steak with steamed broccoli and sauteed green beans. They're trying the keto diet, even though they are average-to-below the right weight in my unsolicited opinion. The potato is their enemy, but wine is their friend! At least according to their tales of what they ate at the previous day's two Thanksgiving dinners.

The original plan had been to eat this meal at Texas Roadhouse, but Genius got to Googling and saw that they didn't open until 3:00 that day. He needed to be on the road by 2:00 so he could be back in Kansas City for some previous engagement. So he gave us a choice of Applebee's or Cracker Barrel. Hick doesn't like Cracker Barrel food. I've only had it once or twice, but I knew that place would be packed with shoppers who'd been up since 5:00 a.m. for Black Friday shopping. So I put the kibosh on that venue.

Three Thanksgiving Dinners, no cooking. You can't beat that with a stick!