Hick has a habit of getting himself into some predicaments that could turn out badly. We'll save the danger for another time, and go with something more prankish. His latest plot is to trick an old lady.

“There’s this Old Lady who won’t come in my Store. She walks by every weekend, and I tell her to come look around, I bet I have things she’d like, and she says, ‘I’ve already been in there. I remember that bowl.’ It’s an eggnog bowl with six cups. It’s sitting up front. I guess she thinks I’m like those other sellers, and don’t ever change out my merchandise. So I’m going to hide that bowl in the back, and see if she’ll come in.”

“I think she’s probably smart enough to remember where your store is, and who YOU are, since you talk to her every week.”

“If she finds that eggnog bowl, she’s gonna be really mad at you for tricking her.”

“I don’t think so. She’ll already have come in, and she might find something she wants. She’s been asking for a bowl with a handle that pours. I looked for one in Walmart yesterday. I’m willing to take a loss on it, just to tell her I have one. Then she might come back and buy more stuff.”

“You mean like for a mixer? I’ve seen them with mixers. They were probably part of a set, and she broke hers. That’s why you couldn’t find one. They were with the mixers.”

It's been at least two weekends now, since Hick moved the eggnog bowl farther back in his Storage Unit Store. He has not see the Old Lady, but he HAS told another old lady about his prank. This is not going to end well if they know each other...

Also, Hick sent me a picture of his completed fishing poles that he put together and donated to the Boy Scout Ranch, along with a tackle box he filled with assorted angling accoutrements. 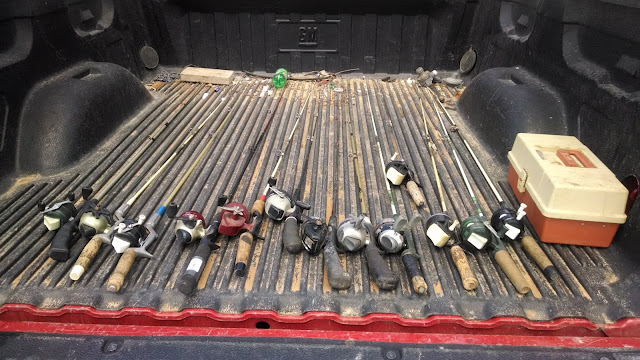 I guess you'd call that a Junker's Dozen. For the most part, he's a good egg, our Hick.
Except when he's pranking old ladies.
Posted by Val at 1:03 PM